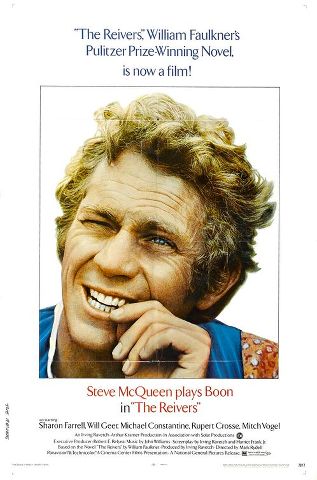 Synopsis:
Based on William Faulkner’s novel, THE REIVERS is a coming-of-age story laced with adventure and comedy. Young Lucius McCaslin (Mitch Vogel) leaves home and sets off on a journey with Boon (Steve McQueen), the family handyman, who is a reiver (cheating philanderer); and his best friend, Ned (Rupert Crosse). The three set off for the big city, where the boy, inspired by Boon, learns some valuable lessons about the world. A delightful piece of southern Americana, director Mark Rydell’s THE REIVERS is witty and filled with lively action. The score by John Williams and the superb cinematography enhance the richly fleshed-out characters. McQueen, in particular, gives one of the most memorable–and often underrated–performances of his career.

Coming out only one year after the enormous success of Bullitt, and fearing that the studio might misleadingly present the film as a “Bullitt II”, McQueen demanded of the studio that The Reivers be marketed honestly, without any misleading press. He was not however happy with the studio’s final promotion, which he felt depicted him as the “village idiot”.

I’ll bet at the end of the sixties Steve McQueen was probably deluged with offers to play cool cops, glamorous thieves, and ultra-hip soldiers in big-scale war movies. But after three successive hits – The Sand Pebbles (1966), The Thomas Crown Affair (1967), and Bullitt (1968) – McQueen instead made The Reivers (1969), from William Faulkner’s novel, about three friends getting into trouble in 1905 Mississippi. The image of Steve McQueen heartily singing “Camptown Races” in a paisley shirt and straw hat must have given his fans pause. The picture took in less than half of Bullitt’s take, and despite McQueen’s cult status, is practically forgotten today except by those who’ve seen it. Long-defunct distributor National General may partly be to blame; several other very good films distributed by them have likewise fallen into obscurity. But The Reivers is a very fine picture, nearly a great film that was mainly a victim of bad timing.

In Jefferson, Mississippi, the townsfolk all turn out for the arrival of the hamlet’s first automobile, an 18-horse-power, yellow Winton Flyer, purchased by patriarch “Boss” (Will Geer). Boon Hogganbeck (McQueen) and Ned (Rupert Crosse), respectively orphaned and abandoned at birth but adopted into Boss’s family (black Ned, a descendent of slaves, claims an acknowledged bloodline to the family), become obsessed with the much-coveted car, fighting over use of the vehicle like quarreling children.

When most of the family leaves town for a funeral, Boon conspires against strict orders from Boss to “borrow” the Winton Flyer for a trip to Memphis. To make his plan work he takes along young Lucius (Mitch Vogel), Boss’s 11-year-old grandson. Ned stows aboard under a tarp in the back seat, and as the adult Lucius (Burgess Meredith, narrating the film like a memoir) notes, “The rewards of virtue are cold and odorless and tasteless and not to be compared to the bright and exciting pleasures of sin and wrongdoing!”

At times, The Reivers is quite magical. Though it teeters toward a freshly-scrubbed Americana nostalgia, like Disneyland’s Main Street, U.S.A., it’s also filled with authentic little vignettes of great charm, obviously drawn from Faulkner’s own childhood. An early scene, for instance, has the Winton Flyer hopelessly stuck in a stream of sticky mud, a trap deliberately maintained by an enterprising hillbilly (1970s film fixture Charles Tyner) who charges $2 a head to pull unfortunate vehicles out with his at-the-ready mule team. Similarly, the trio’s awe at the “highway to Memphis,” a dirt road with a long line of low-to-the-ground telephone poles but dotted with early 20th century marvels (including their first glimpse of a motorcycle) recalls a simpler era.

The picture’s focus is how Lucius loses the innocence of childhood with an introduction all at once to the vices of man. He stares in prepubescent wonder at a life-size painting of a reclining nude woman, yet can’t believe that Boon’s warm-hearted girlfriend (who dotes on Lucius as if he were her own son) could possibly sell her body to a stranger. The conflict between the backwater but genteel sensibilities of his hometown and his simultaneous attraction and repulsion toward the world of grown-up cityfolk is the heart of the picture.

The Reivers also offers an enormously mature approach to race relations and racism, which so often in films wears its heart on its sleeve and lacks the subtlety presented here. It’s sad that the film isn’t embraced more by black audiences.

To that end, while McQueen is fine, the standout performance comes from Rupert Crosse (and, in a much smaller role, Will Geer). Crosse’s Ned is a deliriously breezy rascal, and it’s no surprise Crosse was nominated for a Best Supporting Actor Oscar that year. The role should have propelled Crosse into the top ranks of his profession, but he did only a few guest shots on shows. Another pioneering black actor, Juano Hernandez, is also very good as Uncle Possum, a sort of cynical Uncle Remus.

The film would be perfect if not for some misplaced broad comedy that’s at odds with the tone of the rest of the picture. These scenes stand out even more thanks to John Williams’ score, which is evocative (and, in Williams’ oeuvre, unique) except in the comic sequences, where it’s overly precious.

Another possible reason for the picture’s relative failure is the prudishness of the MPAA. The film was originally rated “M” (the early equivalent of “R”) and re-rated PG-13 this year for its “sexual content, brief nudity, language and thematic elements.” But if ever there was a “family film” this is it, at least for families with children Lucius’ age on up. The nudity, incidentally, refers to young boys skinny-dipping, seen from a distance, for cryin’ out loud.