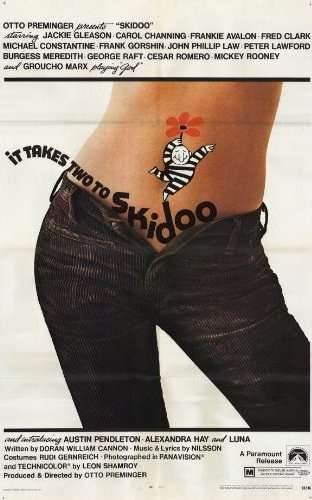 Skidoo was a notorious bomb, failing both with critics and at the box office. In the years since its release it has seen a rise in appreciation by film critics. In 1973 Jonathan Rosenbaum said he valued the film as an “endlessly fascinating aberration… it enlists a legion of Fifties TV corpses into an amalgamation of every conceivable Hollywood genre.” In his 2011 review of the DVD in his New York Times column, Dave Kehr framed the film as the product of Preminger being “politically aligned with the kids… but culturally bound to the grownups”, which “allows his ambivalence to fester into an across-the-board caricature… The result is a finely controlled mess, one of the most uncomfortably evocative films of its time.”
– Wikipedia

The movie received some belated attention in the late 1970s when it was screened at San Francisco’s Roxie Cinema and in the 1980s when seen on cable TV. New York City’s Museum of Modern Art periodically exhibits a 35mm print, and it also screened at the USA Film Festival in Dallas in 1997 and had a Los Angeles showing in 2007 at the American Cinematheque.
On January 4–5 and July 11–12, 2008, paired with another counterculture-themed feature, 1967’s The Love-Ins, Skidoo was seen as an installment of Turner Classic Movies’ Friday night–Saturday morning TCM Underground series. Each film features a brief appearance by then-famous/notorious chain-smoking, “tough-guy” syndicated TV talk show host Joe Pyne, who died of lung cancer in March 1970 at age 45.
As of 2011, the film is in rotation on Showtime. Olive Films released the film on DVD in its original aspect ratio on July 19, 2011.
– Wikipedia