Dietrich Brüggemann – Kreuzweg AKA Stations of the Cross (2014) 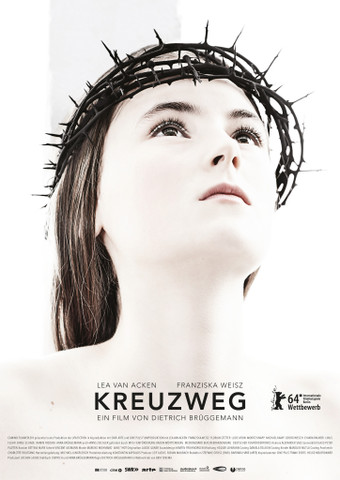 Maria is 14 years old. Her family is part of a fundamentalist Catholic community. Maria lives her everyday life in the modern world, yet her heart belongs to Jesus. She wants to follow him, to become a saint and go to heaven – just like all those holy children she’s always been told about. So Maria goes through 14 stations, just like Jesus did on his path to Golgatha, and reaches her goal in the end. Not even Christian, a boy she meets at school, can stop her, even if in another world, they might have become friends, or even more. Left behind is a broken family that finds comfort in faith, and the question if all these events were really so inevitable. STATIONS OF THE CROSS is an indictment and, at the same time, the legend of a saint. It’s a story of religion, devotion and radical faith, and the film itself comes along just as radical as the subject matter, telling the story in only 14 fixed-angle long shots, allowing the viewer to contemplate the interactions on screen in an entirely different way than in a traditional film.