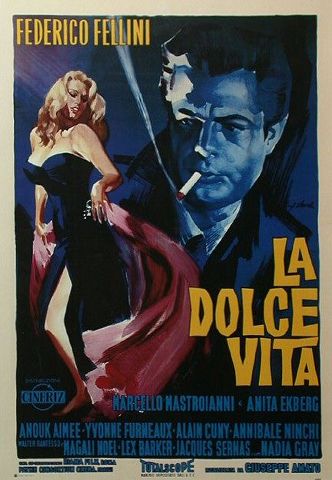 Quote:
In one of the most widely seen and acclaimed European movies of the 1960s, Federico Fellini featured Marcello Mastrioanni as gossip columnist Marcello Rubini. Having left his dreary provincial existence behind, Marcello wanders through an ultra-modern, ultra-sophisticated, ultra-decadent Rome. He yearns to write seriously, but his inconsequential newspaper pieces bring in more money, and he’s too lazy to argue with this setup. He attaches himself to a bored socialite (Anouk Aimée), whose search for thrills brings them in contact with a bisexual prostitute. The next day, Marcello juggles a personal tragedy (the attempted suicide of his mistress (Yvonne Furneaux)) with the demands of his profession (an interview with none-too-deep film star Anita Ekberg). Throughout his adventures, Marcello’s dreams, fantasies, and nightmares are mirrored by the hedonism around him. With a shrug, he concludes that, while his lifestyle is shallow and ultimately pointless, there’s nothing he can do to change it and so he might as well enjoy it. Fellini’s hallucinatory, circus-like depictions of modern life first earned the adjective “Felliniesque” in this celebrated movie, which also traded on the idea of Rome as a hotbed of sex and decadence. A huge worldwide success, La Dolce Vita won several awards, including a New York Film Critics CIrcle award for Best Foreign Film and the Palme d’Or at the Cannes Film Festival.