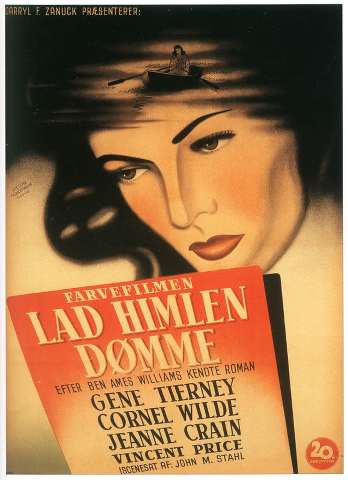 A fevered yet clinical study of jealousy, Leave Her to Heaven is probably John M. Stahl’s best-known film. In many ways, it is far removed from the sober, intense concentration of Stahl’s major and underseen ’30s soap operas; his early movies were deliberately plain and spare, while Leave Her to Heaven is overpoweringly artificial and rococo, with intimations of neurotic fantasies churning away underneath its lacquered, rotogravure images. Immediately pulsing with the thumping drums of Alfred Newman’s stormy score, the film proceeds very slowly at first, as Stahl builds a dreamlike Technicolor atmosphere around his three leads, Gene Tierney, Cornel Wilde, and Jeanne Crain. These actors are eerily one-dimensional, and Stahl uses their limitations as performers to his advantage, making them look like sleepwalkers in a sort of Life magazine nightmare.

At the center of the movie is Tierney’s Ellen, a monstrous amalgam of Hedda Gabler, Jackie O, and a zombie; she wants to have her husband Richard (Wilde) all to herself, at any price. Aside from some obscure daddy issues, we never find out any really suggestive reasons for Ellen’s psychic unrest, but Stahl creates several fabled set pieces that express the will of his anti-heroine. Set Piece Number One: Ellen rides ’round and ’round a hillside, her face frozen with unreadable hauteur, stiffly disposing of her beloved father’s ashes as if she were following a metronome ticking in her head. Set Piece Number Two: Ellen sits in a rowboat, her eyes hidden behind ’40s sunglasses, and calmly watches her crippled brother-in-law Danny (Darryl Hickman) drown (Stahl implicates us in her sociopathic behavior by making Danny a fairly unbearable boy of the “gosh golly swell!” variety). Surely many women can identify with a pregnant Ellen when she cries, “This baby is making a prisoner out of me!” Her initial, recognizable, stir-crazy feeling thus informs our guilty pleasure at Ellen’s audacity when she dives down a steep staircase to abort her baby, Set Piece Number Three, which is certainly the most shocking of her big scenes. It is Leave Her to Heaven’s signal achievement that Stahl is able to make Ellen both mysteriously unstoppable and poignantly trapped.

There are visual motifs here that keep returning like bits of recapitulated music, especially the image of water surrounded by trees, people moving in and out of silhouette, and the cool Technicolor greens slashed by the red of Ellen’s fire-engine lips. Stahl uses dissolves for this dream work, of course, but he also takes a big chance by fading to black after an important episode and holding the black out for a beat or two, as if our eyes were involuntarily closing in sleep every once in a while. When we get the image back, everything seems unsettled, disoriented; the bric-a-brac and green cactuses cluttering the sets start to feel suffocating. These black outs last three or four beats as the film goes on, then cease for the last 15 minutes, a perfunctory climax where Vincent Price shatters the mood with his overacting as a prosecuting attorney. In the midst of this courtroom letdown, Stahl focuses our attention on an ostentatious window above the witnesses’ heads that is surely meant to be Ellen’s Cyclops-like eye watching over her own diabolical handiwork. This is a film that exists in some floating subconscious state where any behavior is allowed, where fear and helplessness are inevitable. If Stahl seems close to Carl Dreyer in his ’30s work, with Leave Her to Heaven he plunges headfirst into a sort of cruel, thin Daliesque landscape where an inscrutable beauty’s liberating vengeance has no limit whatsoever.
©Dan Callahan
September 13, 2007 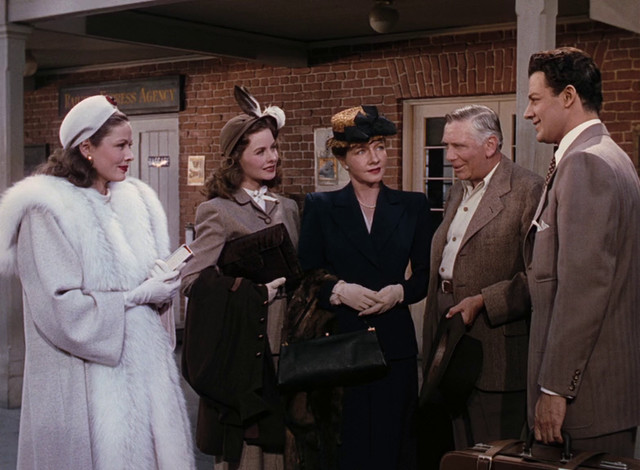 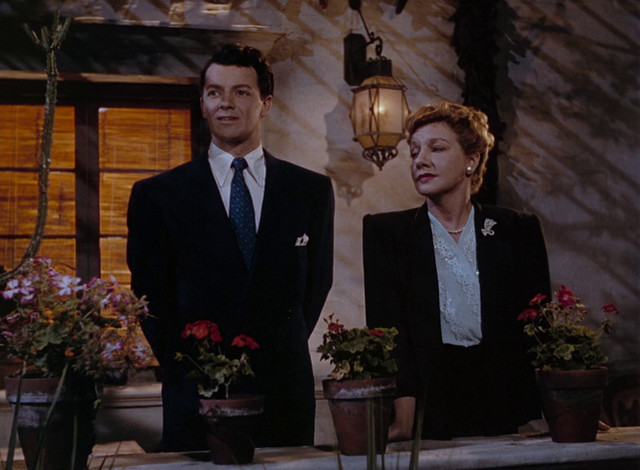 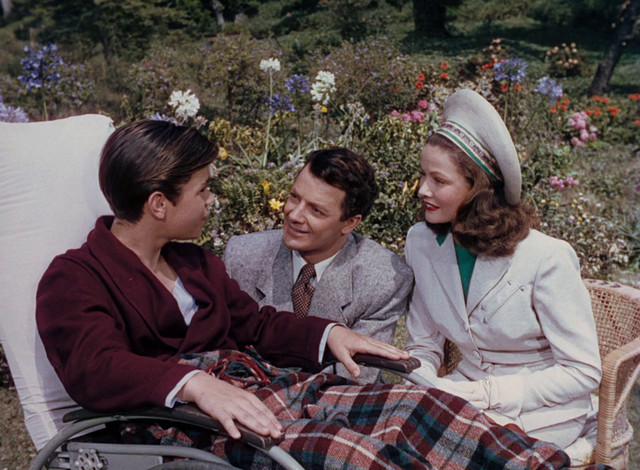 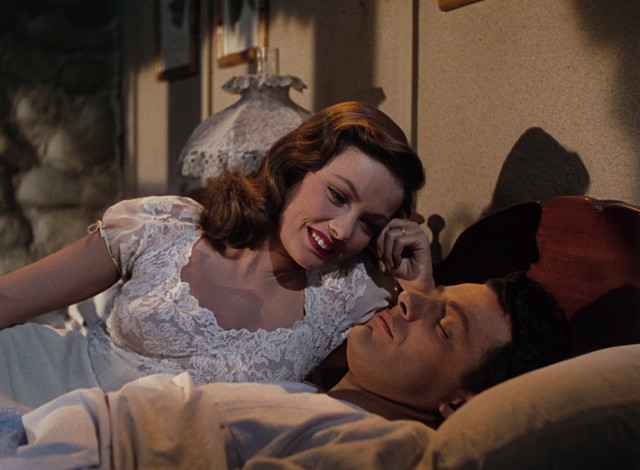 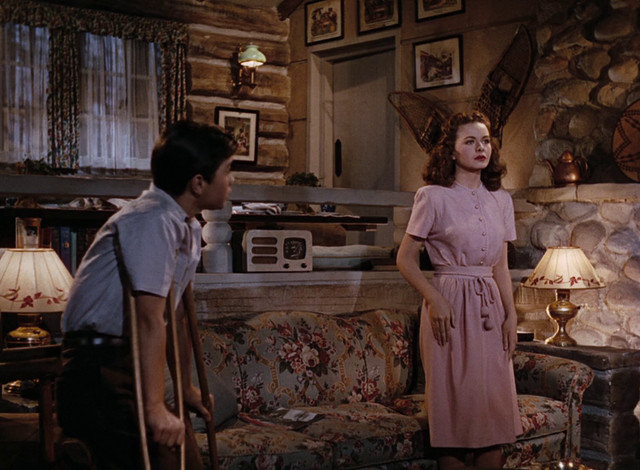 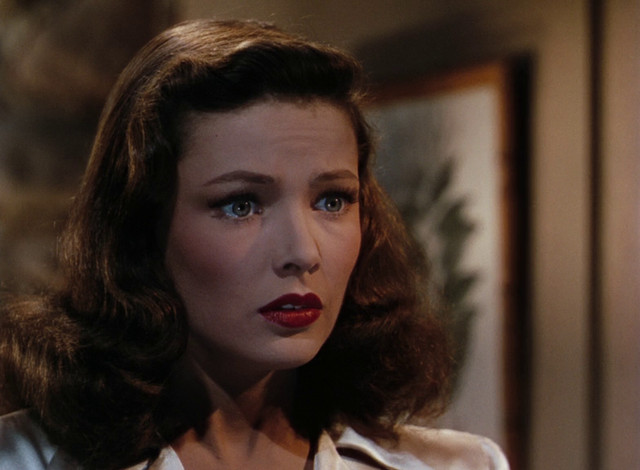 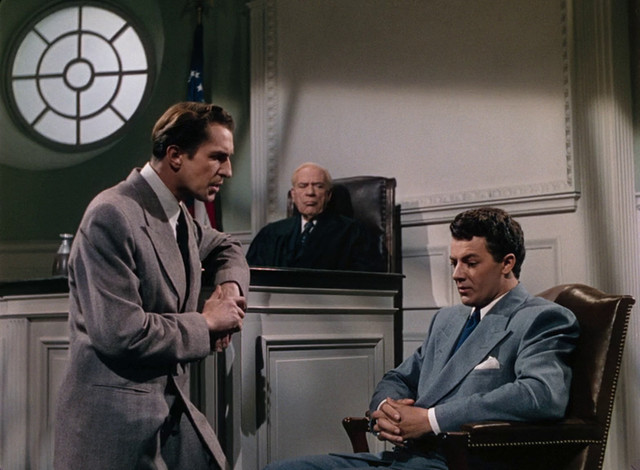