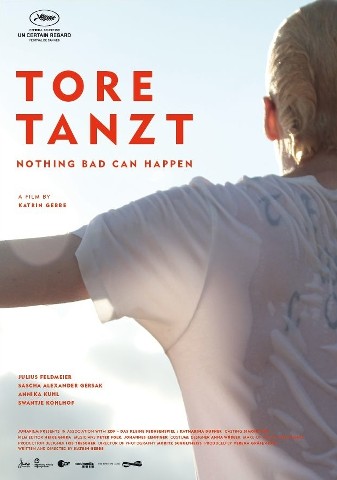 Synopsis
Inspired by atrocious true events, Nothing Bad Can Happen follows Tore, a young lost soul involved with an underground Christian punk movement who falls in with a dysfunctional family curious to test his seemingly unwavering faith. After a chance encounter helping Benno, a stranded driver and managing to help start his car again in what appears to be a miracle, Tore is invited back to his home and becomes friendly with him, his wife and two kids. Before long, Tore moves in and gradually becomes part of his family. However, Benno can’t resist playing a cruel game, designed to challenge Tore’s beliefs. As his trials become more and more extreme, Tore finds his capacity for love and resilience pushed to its limits, and beyond.

Press comments
„First-time director Katrin Gebbe makes an intense Cannes debut.“
„Tore Tanzt is intense and gripping, with solid indie credentials.“
„The film climaxes with a torrid crescendo of psychosexual sadism and Biblical symbolism reminiscent of Lars von Trier at his most pessimistic. A German film that attains Danish levels of soul-crushing bleakness? High praise indeed.“
„Gebbe has made a robust and compelling first feature, deftly shot and ably acted, especially by its younger cast members.“
(THE HOLLYWOOD REPORTER)

“But whatever your squabbles, of which you may have many, Gebbe succeeds with what she set out to do—she’s made an upsetting film that will make you angry, make you cringe, and most importantly, for better or worse, make you remember her name.” IONCINEMA.COM

« The film is very deliberately paced, and its ties to genre cinema are tenuous, but those who‘ve been following and enjoying Drafthouse‘s slate of releases know what they‘re in for, and certainly won‘t want to miss this riveting example of transcendent horror. » FANGORIA.COM

“Nothing bad can Happen is a shocking , deverse Film that demands attention.”
“Venom-filled, provocative filmmaking that‘s impressively shot for a first feature and packed with compelling performances.”
(FSR)

“The film climaxes with a torrid crescendo of psychosexual sadism and Biblical symbolism reminiscent of Lars von Trier at his most pessimistic. A German film that attains Danish levels of soul-crushing bleakness? High praise indeed. (…) Gebbe has made a robust and compelling first feature.” (Stephen Dalton)

“…a shocking, diverse film that demands attention.”
“Gebbe’s film has a hauntingly compelling point to make about the nature of religious commitment, and the potential result of turning one’s cheek too many times.”
“a well-composed, unapologetically intense film shot through with an especially brave performance from impressive young lead Feldmeier. It is cinema of the angriest kind from a hungry new filmmaker keen to provoke.”
(FILMSCHOOLREJECTS.COM)

“Every festival there’s at least one film that will break you. This is it.”
“Shocking and moving in equal measure, this game of cat and mouse is as unnerving as it is exquisitely executed. This is the most spine-chilling dramatic thriller to come along since the original Dutch version of The Vanishing (1988).” (the vine)