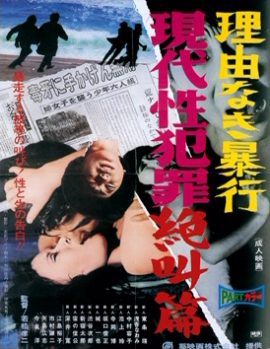 Synopsis
Three poor young university student dropouts, with hardly any money left, hang around and decide to move to countryside Aomori where they stay at one of the boys small appartment. As they wander around the beach they spot a young couple and decide to rape the girl. They all feel rejected by society and try to get out of their state. One of the boys eventually gets a hold of a gun and commits suicide, while the other accidentally finds a gun and shoots at a policeman. The story was probably inspired by the figure of Norio Nagayama, a 19 year old serial killer who was convicted of killing 4 people in a cross-country murder spree in 1968 (see Masao Adachi’s movie AKA Serial Killer which is about this figure).

Quote:
1969 was a quite productive year for Wakamatsu. Yet he was a little tired of scenarios written by Adachi and Yamatoya, for their themes didn’t vary if he proposed a new idea. As he wanted to express his idea on ‘futile youth’ in his own way, he asked three university students to write a scenario on that theme, saying that if they wrote one, they would play the leading parts.
This film was an exceptional and personal one of his in those years around 1970. He thought he’d realised his idea in it to a certain extent. But almost all the critics ignored or overlooked it, and Wakamatsu himself hasn’t referred to it either – as far as I know. It had been forgotten for a long time and then was released on dvd in 2006.