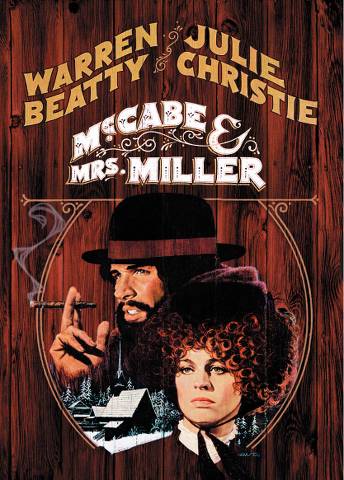 “McCabe & Mrs. Miller” is a western that, as shot by Vilmos Zsigmond, looks like old photographs lit from within, as though the subjects had created a sort of afterlife by finding a way to project their essence onto the film. The movie haunts you like a ballad whose tune you remember but whose words hang just beyond reach. And like listening to a ballad, we know the outcome of the events we’re watching was foretold long ago, but we’re helpless to do anything but surrender to the tale.

McCabe, a romantic fool who fancies himself a big shot, is a gambler who dreams that his fortune lies in bringing a saloon and a whorehouse to the mining town of Presbyterian Church. His business partner, Mrs. Miller (Julie Christie), is a hard-headed madam with dreams of her own, the ones emanating from her opium pipe. The movie feels as delicate, as lulling, as Mrs. Miller’s drug-induced visions, and yet the life it shows us, the town and its people, are so real and sturdy we seem to have stumbled on them. The life the movie shows us is already being lived by the time we turn up. And everything we encounter evolves naturally — the setting, the characters, the story and most of all the mood.

“McCabe & Mrs. Miller” is beautifully, overwhelmingly sad, the sort of romantic sadness you can fold around you like the bearskin coat McCabe envelops himself in. The melancholy is there even when you’re laughing at the conversations Beatty (who gives the sort of performance that makes you fall in love with an actor) conducts with himself; when McCabe is assuaging his longing for Mrs. Miller by paying $5 for a night with her; even when hired guns come to town to force him to sell his interest.

For me, “McCabe & Mrs. Miller” is the standard for a sort of emotional purity, a movie whose feeling permeates you without ever once forcing a thing. Emerging from it, I always feel like the town drunk who attempts a jig on the ice in one scene: drugged, unsure of my footing, as if one step would send the whole enterprise crashing to the ground. I try to clutch the images to me even as they seem to evaporate like smoke. Like all things that are beautiful and unalterably sad, “McCabe & Mrs. Miller,” by its final scene — the hired guns tracking McCabe through a quiet, persistent blizzard — achieves a deep sense of peace. Your heart is breaking, but you can’t help being struck by the loveliness of the snow that, like Joyce’s, settles over all the living and the dead.”