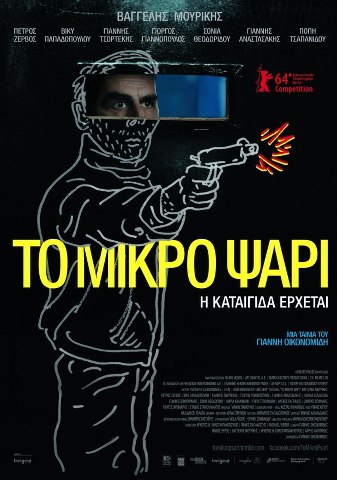 Synopsis
By night, Stratos works in a bread factory but by day, he’s a professional hit man. He needs the cash to free Leonidas from prison because the latter once saved his life when he was behind bars. For Stratos, this is simply a question of honour. We’ve no idea how many people he’s already killed, but we do notice that he still has a conscience. He attentively looks after a neighbour’s child, eight-year-old Katharina, as well as her mother and an uncle. At last he has enough money for the prison break-out. But Leonidas is lured into a bloody trap, by his brother of all people, who disappears with the money. At the same time Stratos learns that little Katharina is in danger – both psychologically and physically. He must act, even if this means following one wrongdoing with another.
Cineuropa.org

Reviews
Certain to be one of the more divisive Competition films to have screened at this year’s Berlinale once the dust had settled, Yannis Economides hogties and drags his national cinema from the shadow of Yorgos Lanthimos with fourth feature Stratos (2014), a bleak, brooding noir deliciously tainted by bad debt, ill-advised investments and good old fashioned greed…
Daniel Green, CineVue

…With its cartoonish cast of hit men and hunchback, mobsters and whores, Stratos could have been a thrilling Tarantino-esque riff on classic pulp-fiction tropes. But instead Economides opts for low-key naturalism, dragging out the running time to over two hours, draining away any guilty pleasure and replacing it with somber self-seriousness…
Stephen Dalton, The Hollywood Reporter

Multifaceted, lanbyrinthine, full of characters and conflicting dynamics, ‘Stratos’ begins like an apocalyptic mosaic of some parallel universe that seems to be moving next to or beneath ‘our own’. It’s a world director Yannis Economides has visited before in his filmmaking. This time, he tries to map it with details and a penetrating gaze, through his hero Stratos, a man who has just left prison, but isn’t yet ready to abandon a life of crime.
Giorgos Krassakopoulos, Flix.gr

A film noir with a strong social under-current running all through it, Yannis Economides’ new film Stratos (To mikro psari) urgently tries to play his own acerbic comments on the present state of Greek affairs on an instrument that has far too many strings and seems to be never tuned properly enough to accommodate all the melodies it is supposed to sound…
Dan Fainaru, Screen Daily

…Many may mistakenly try to fit his newest film, Berlinale competitor Stratos, into the recent mould of films shaped by the financial crisis tormenting Greece, but Economides’ characters have always been in crisis, long before his country’s economic bubble burst. Rather, they were the ones suffering specifically because they didn’t find a way to cozy up inside that bubble. His antiheroes tend to be products of their environments, passive receptors of a rage brought upon them by the frustration of those around them…
Joseph Proimakis, Cineuropa