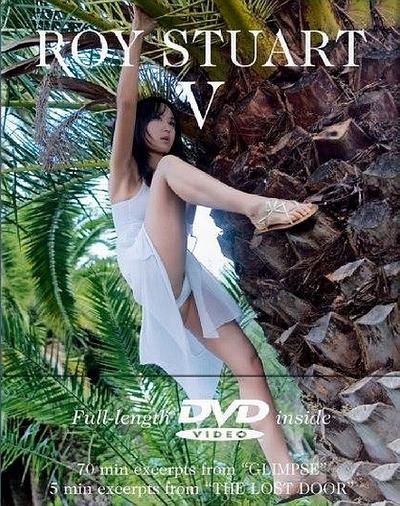 In his new book, the fifth to date, Roy Stuart hones this exploration into something more forthright, close to film. The photos “tell” short stories, like short films, and the models become actors, their movements caught in freeze frame studies, between portrait and narrative. Sex is more explicit, while retaining some of the mystery characteristic of erotic images. A DVD, which comes with the book, contains several scenes from which the photos are taken, with extracts from the “Glimpse” DVD series and Stuart’s full length feature film, The Lost Door. The overall impression produced by this work is that Stuart has introduced eroticism into pornography, or vice versa. He clouds issues, confuses codes, disorientates and takes risks, all the while behaving as an artist who is exploring a new middle road – fusional, original and hard to follow, but promising. Somewhere between simplistic X-rated films and pure eroticism, between trivial reality and abortive dreams, he seeks and finds a third way, the royal way.

Quote:
A Beautiful Sexual Explosion!
This is Stuart’s fifth book from Taschen and the common denominator throughout is Stuart’s powerful, unique, erotic style. This collection of stills also includes a DVD that chronicles the action. This is striking because the photographs are not random snapshots but appear to follow the sexual encounters as their play out. And though the live action is spectacular .. the photographs are electrifying. The locations, wardrobe, makeup, and especially the flawless beauty of the models themselves give the work a forbidden quality – like a Vogue photoshoot gone wrong, where the models suddenly gave into their desires and started to grab and claw and ravish each other. Through Stuart’s camera we are allowed witness to each chaotic, sexual explosion. It’s the ultimate voyeur experience.