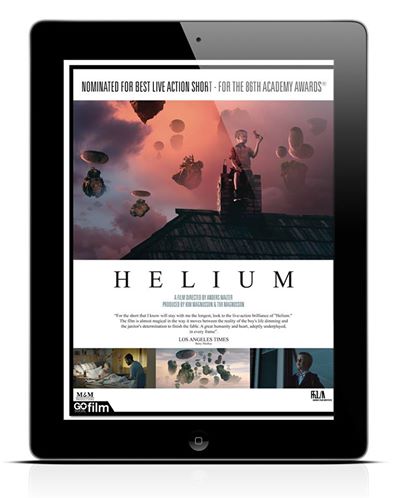 IMDB Review wrote:
The special begins with Anders Walter’s “Helium,” a Danish short that follows the life of a young boy named Alfred (Pelle Falk Krusbæk), a terminally-ill young boy who is wasting away in a children’s hospital. Alfred, however, has his mind temporarily taken off his illness when he meets Enzo (Casper Crump), a janitor who tells him of a place called “Helium,” an alternative place to go rather than Heaven. The idea of Heaven is unexciting to Alfred, and the idea of “Helium” even owes itself to the fact that Alfred loves balloons, blimps, and all sort of objects that fly thanks to air. Enzo makes him a red balloon dog, which he informs Alfred will allow the airship that will eventually pick him up to know where he is at and that he wants to go to “Helium” rather than Heaven.This is a tender short, and another one in the Academy Awards’ long history of finding and nominating ones that deal with death and the afterlife. Explored in addition to dealing with death and a relationship that is brewed thanks to a poor circumstance is the constant struggle of being a nurse or someone who spends much of their life around sick people and children. You become attached, and with many of these kids, the end is nigh and you also are one that needs to find a way to let go. Aside from some mawkish tendencies and a short that deals a bit too heavily in the cuteness aspect, this is a fine short film. If you have a soft heart, I foresee the last three shots of the film being something of a rough sit.