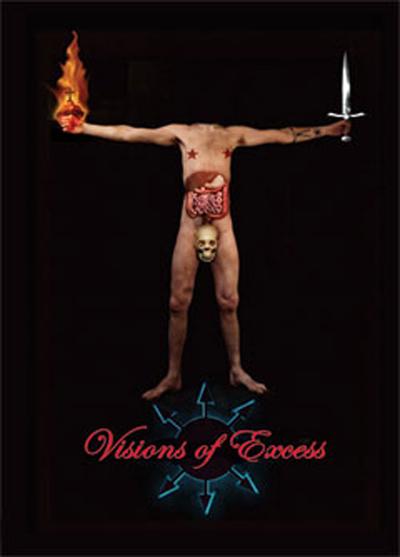 Quote:
“Visions of Excess was a non-stop, 12 hour voyage into the heart of darkness, a communion with the ragged spirit of Georges Bataille, exploring the philosophers key themes of death, eroticism and the forbidden. This DVD features documentation from Visions of Excess London. Easter Sunday, 2009. Commissioned by SPILL Festival. “In keeping with the spirit of the man whom Andre Breton dubbed ‘the excremental philosopher,’ we are particularly looking to program work that contextually crosses over from alternative cultures into an art context, and established artists whose work has transformational qualities that reach beyond the gallery/museum lens. Our goal with Visions of Excess is to create a phenomenal experience that is greater than the sum of its [already excessive] parts that will resonate with audiences for many years to come.Our intention is not merely to curate a group exhibition, but to lay down the map for a journey. The concept for Visions of Excess is not a tidy one, it is our aim to curate a perfect mess, strategize a series of installation options, stage acts of defiance, frame out space but leave room for spontaneous experiences to develop. In the end the event will create a vertiginous ‘total derangement of the senses’ that is designed to open up space for thought and action, personal transfiguration and the expansion of consciousness, because, aside from watching, listening and viewing, the nature of the work we have programmed has always been highly transformational, suddenly audience have found themselves on the set of a Bruce La Bruce photo shoot, performing in a peep-show, having a one-on-one audience with Warhol legend Udo Kier, or being sandwiched between Kira O’Reilly and her mother in a lap-dance booth. Each event has taken on a life of its own.”