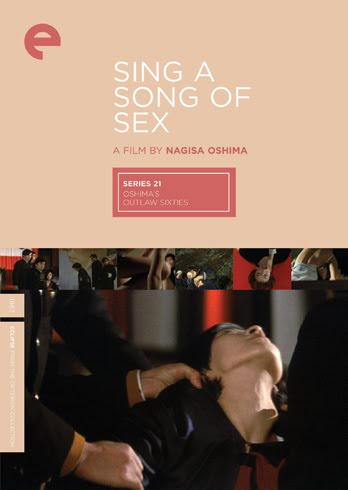 This gets our vote as the most overlooked of Oshima’s films, underrated perhaps because its English title makes it appear frivolous. It’s decidedly not. Despite flights of comedy, (unnerving) sexual fantasy, youthful yearning, karaoke and hootenannies, Sing a Song of Sex offers an intent, penetrating portrait of a generation confronting its new freedoms and its inability to act on them. Oshima obviously considered the film very important, one infers from the essays he wrote about it.

In some ways, Sing a Song resembles Godard’s La Chinoise (notice the pop visual compositions, with looming movie posters and Coca-Cola billboards). A group of provincial students arrives in Tokyo to take university entrance exams. Disillusioned and nihilistic, they spend their time singing dirty songs and fantasizing about strangling a rich girl. Set on a politically charged day – the Founder’s Day holiday, reinstated in 1967 after the American Occupation had banned it – amid gently falling snow, this tender, crushingly sad examination of the alienation of Japanese youth suggests that solidarity is illusionary, and that political action will always be trumped or undone by sexual desire. The portrait of Otake, the students’ mentor who teaches them the sex songs of the title, which he says express the despair of the oppressed, is movingly ambiguous. The film’s final sequences are among Oshima’s most disturbing. (James Quandt)

The semi-improvised A Treatise on Japanese Bawdy Song – begins Oshima’s trilogy on Japan’s Korean legacy and a turning point of the director as his trip to South Korea changed his life – juxtaposes the sexual longings of four male students with an impassioned lecture, delivered by Oshima’s wife, on the Korean origins of the Japanese race itself. The black comedy Death by Hanging (68) reimagines the case of a highly intelligent Korean-Japanese high-school boy who was hanged in 1963 for raping and murdering two young women five years earlier; the film is equally about questions of Korean identity in Japan, thought-crime, and capital punishment. And the anarchic comedy Three Resurrected Drunkards (68) centers on three students who, for complicated reasons, wind up wearing the clothes of some deserters from the Korean army; the deserters are trying to enter Japan illegally to avoid being sent to Vietnam during their compulsory military service. The film includes a vox-pop montage in which all interviewees follow the Spartacus gambit by claiming to be Korean; among them is Oshima himself.

This loose “Korean trilogy” pointed at least three ways forward for Oshima’s filmmaking. First, it liberated him from thinking himself inescapably implicated in the student-radical movement, and from Japan’s “consensus-identity” in general. Identifying himself with the most discriminated-against minority in Japan opened the door to wider perspectives. Second, it ended forever his faith in “realism” as a viable idiom for his work; his subsequent films all interweave “reality” with individual and collective fantasies. (In interviews since 1969, Oshima has more than once named Buñuel as the only director he profoundly admires.) Third, it clinched his growing sense that sex and crime (and, of course, sex crimes) rather than politics were the pressure points that needed his shiatsu touch. Crime is by definition an act of disobedience, and Oshima, like Jean Genet, sees in it the seeds of rebellion. Sex can be defined as a physical act with limitless mental ramifications; the Japanese (who had no Puritan tradition until General MacArthur imported one in 1945) are generally more matter-of-fact about sex than most western countries, but no less prone to transgressive libidinal impulses—and it’s the transgression, of course, that Oshima sees as potentially rebellious.