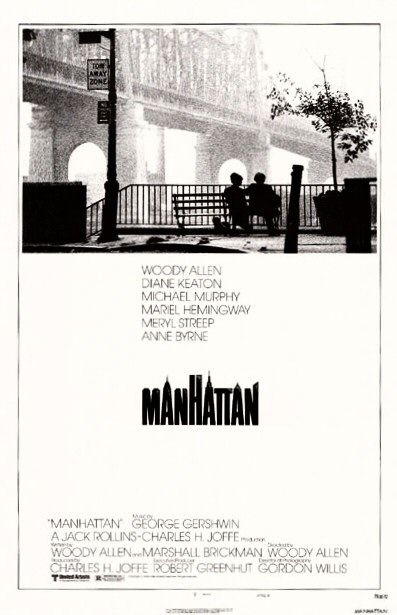 Synopsis:
Isaac, 42, has divorced Jill. She is now living with another woman, Connie, and is writing a book in which she will reveal some very private points of their relationship. Isaac has a love affair with Tracy, 17, when he meets Mary, the mistress of his best friend Yale. Yale is already married to Emily.

“Manhattan” was a milestone in Woody Allen’s film-making career and marks the point at which he fully realised his talent. Indeed many critics would argue this is still his best film.

Set amidst Allen’s own world of Manhattan media high rollers, this hugely entertaining and literate film is a meditation on the clash between the private neurosis and public front of the sophisticated set. Woody Allen stars as Isaac, a television comedy writer nervously contemplating the complexities of his life – the triviality of his work, his ambitions, his disastrous relationships with women, and the imminent betrayal of his best friend Yale (Murphy). As if these private machinations weren’t enough, his lesbian ex-wife is about to publish a book about their marriage and divorce and soon everyone will know just how kooky and neurotic he really is.

The film perfectly captured the insecurity of late 1970s America. With more money, more freedom, and more choice than ever before, guilt and insecurity plagued the urbane, and the whole world seemed to be asking their counsellors “Am I fulfilled?”This perfectly poised comedy has spent the last 20 years among every pundit’s top 50 films – if not their top ten. Despite being based on little more than a soap opera plotline, this hugely inventive film managed to be simultaneously funny, poignant, and sad. Shot entirely in black and white, Gordon Willis’s beautiful, widescreen cinematography perfectly captures the melancholic romance of Allen’s Manhattan landscape.