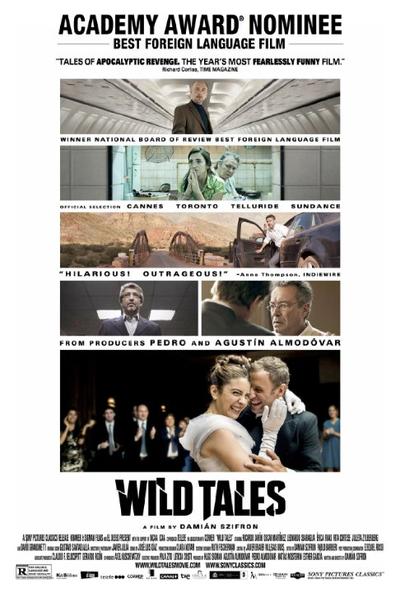 Quote:
The first ten minutes of Argentina’s Wild Tales, nominated for Best Foreign Language Film at this year’s Oscars, perfectly set you up for the experience you are about to have. A woman boards an airplane, then strikes up a conversation with the man across the aisle from her. It turns out he knows her ex-boyfriend. So does the woman seated in front of him. So does everyone else on the plane. It’s too much to be a coincidence, and it’s not. The guy they all know is the pilot; his passengers are people who have done him wrong. The scene ends with a stunning Twilight Zone-esque twist, then segues into an opening credits sequence set against photos of wild, often predatory animals. Writer/director Damian Szifron grabs you by the throat from the get-go, then proceeds to deliver a dazzling ride.

Wild Tales is a series of short stories strung together, all unified by the theme of retribution. A young waitress struggles with whether or not to poison the food of the local gangster responsible for her father’s death. A redneck and a rich guy in a sports car become locked in an escalating case of road rage. An engineer tries to strike back at the bureaucracy that he believes is screwing him. A grieving man seeks revenge against the hit-and-run driver who killed his wife and unborn baby, while the culprit’s wealthy father angles to pay off the authorities. In the final, longest, and most show-stopping story, a bride’s wedding day is ruined when she learns her new husband has cheated on her, so she sets out to make his life miserable.

The problem with anthology films is that, more often than not, some of the stories are stronger than others. Usually, there’s at least one clunker. Wild Tales astoundingly avoids that problem. Each of the stories is compelling and original. You’d be hard-pressed to decide which one is best, because they’re all so good. Szifron shows an admirable ability to modulate tone, as his tales go from being darkly funny to scary and back again. The sequence involving road rage is a great example. It starts out as a typical Wouldn’t it be nice to get even with a jackass driver? fantasy, then becomes deeply unsettling as the two men resort to more violent, unforgiving tactics. It culminates in an almost Coen Brothers-style conclusion that is equal parts horrifying and humorously ironic. The wedding sequence plays out similarly, veering naturally from joyous, to heartbreaking, to hilarious, to violent, to tragic, to touching – all in the span of about twenty-five minutes.

Aside from being hypnotically unpredictable, Wild Tales works because it deals in basic human emotions each of us can relate to. Anger and vengeance are things we all occasionally think about (but hopefully don’t act on). Part of the beauty of the film is that it walks you up to that line. You can identify with the characters to a point. When they tip over into bad behavior, you ask yourself, Could that be me? This gives the movie unexpected resonance. It makes you think about how easily situations can turn ugly, as well as the ramifications if they do.

Szifron shoots with a showman’s sense of style, using creative angles, camera techniques, and shot compositions to maximize his stories’ shared theme. His direction is confident and assured. The performances are perfect in every sequence, as well. Wild Tales is both great entertainment and great cinema, in that it sucks you in while also making you appreciate its skillful, inventive execution. This is, in every conceivable way, an exhilarating film.