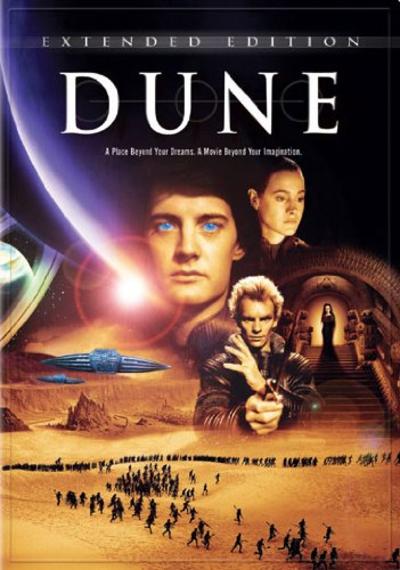 SEVERAL of the characters in ”Dune” are psychic, which puts them in the unique position of being able to understand what goes on in the movie. The plot of ”Dune” is perilously overloaded, as is virtually everything else about it. As the first king-sized, Italian-produced science-fiction epic, ”Dune” is an ornate affair, awash in the kind of marble, mosaics, wood paneling, leather tufting and gilt trim more suitable to moguls’ offices than to far-flung planets in the year 10191. Not all of the overkill is narrative or decorative. Even the villain, a flying, pustule-covered creature, has more facial sores than he absolutely needs.

”Dune,” which opens today at the Gemini and other theaters, is knee- deep in the jargon of Frank Herbert’s hugely popular novel, a book better loved for its mysticism and adventure plot than for terms like ”Kwisatz Haderach,” ”Bene Gesserit” and ”gom jabbar.” Instead of streamlining either the language or plot of this lengthy book, David Lynch, who directed the film and wrote the screenplay, tries to present it in unadulterated form. This means he must pause periodically for great infusions of data, as if the occasional subtitle or breathless voice-over could make sense of it all.

As George Lucas proved with ”Star Wars,” audiences in the thrall of an exciting story will absorb, even embrace, any amount of strange new facts, words, gadgets or creatures. But in its film version, the story of ”Dune” doesn’t begin to have that kind of appeal. True, it’s about two factions that war bitterly for control of the title planet, which produces a greatly coveted spice called melange (Mr. Herbert’s vocabulary was a marvel of eclectic etymology). And mining for the spice activates the planet’s Moby-Dick-size worms. The story also traces the rise of a teen- ager named Paul from mere boy to Dune-saving messiah. That ought to be more than enough to fill a movie, but it is presented here much too solemnly to leave room for the wit or agility that could have made it fun.

The tale is played out by a large, reputable and unglamorous international cast, hardly what was needed to lend the film personality. (The rock star Sting, with his smile of festive malevolence, is a slight exception, but try not to blink if you want to see him; his role is extremely brief.) Actors like Max Von Sydow, Jose Ferrer, Richard Jordan, Linda Hunt, Jurgen Prochnow, Kenneth McMillan (as the boil-covered villain) and Kyle MacLachlan (as the bland young hero) do what’s expected of them, but no one here contributes any real flair. Everyone is upstaged by the dialogue, decor, and fussily attention- getting costumes of the sort that just might be remembered at Oscar time.

There are no traces of Mr. Lynch’s ”Elephant Man” in ”Dune,” but the ghoulishness of his ”Eraserhead” shows up in the ooze and gore distinguishing many of the story’s heavies. Diehard fans of Mr. Herbert’s novels may not mind this or anything else about the movie, but its appeal to neophytes is distinctly limited. Some of the special effects, like the glowing blue eyes on Dune’s native faction called Fremen, are unusual. There’s a nice worm-fight at the end of the story. The music, by Toto and Brian Eno, is intermittently effective. But too many of the fancier touches backfire, like the water-saving ”stillsuits” with their black nosepieces, designed to enable people on the bone-dry Dune to preserve bodily fluids. These outfits ought to pique the audience’s curiosity. Instead, they have the reverse effect of making anyone who wears one, man, woman or child, look vaguely like Groucho Marx.