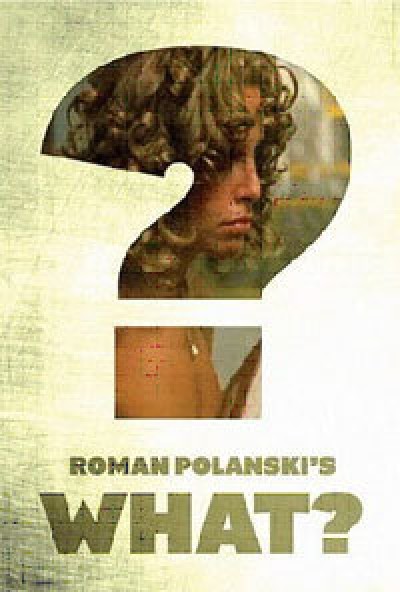 Synopsis:
One of Roman Polanski’s lesser-known films, Che? (also known as What?) stars Sydne Rome as an attractive young hitchhiker who, as the film opens, accepts a ride from three men in a car, who later attempt to rape her. She escapes their clutches and makes her way to a mansion owned by millionaire Joseph Noblart (Hugh Griffith), who is overseeing a decadent party. Among the guests at his home are a pair of table-tennis players, a man with a harpoon (played by Polanski himself).

Review:
The parallel between the story of “What?” and “Alice in Wonderland” by Lewis Caroll is very interesting, and maybe this film is the most precise adaptation of Caroll’s crazy story, precisely because it really shows all the sexual content of Alice’s dream trip. The movie construction reminds the “passage” of Alice “behind the mirror”: she escapes the cruel world (the rapists) when she goes down to the “loonies house”. Mastroianni’s pimp character reminds of the Mad Hatter, because he keeps asking Sydne Rome if she wants to have tea with him around five o’clock. Polanski’s character can also be seen as the Mad Hatter sidekick in the book: he keeps fighting with Mastroianni all day long, as if it was some kind of game between them. Polanski is very funny as a nervous “little guy” with a splendid mustache! At the same time he was shooting “What?” in Italy, Andy Warhol and Paul Morrissey shot “Flesh for Dracula” nearby, and that explains Polanski’s apparition with mustache in a scene of this film. Of course, the “sexual innocence” of Sydne Rome put the film on the rank of “erotic fantasy”. The tribute to “Alice” is clear, but it seems that the film may have influenced a great Italian erotic illustrator, Milo Manara, whose sexy heroins really look like Sydne Rome, and are often place in similarly “unvolontary” sexual situations (oooh, the pooor girl lost her clothes, what a shame!). Anyway, this is a crazy absurd funny and sexy film, that never takes itself seriously (at the end, Rome yells to Mastroianni: “Don’t worry, this is only a film!”)with a very colorful and “sunny” atmosphere.