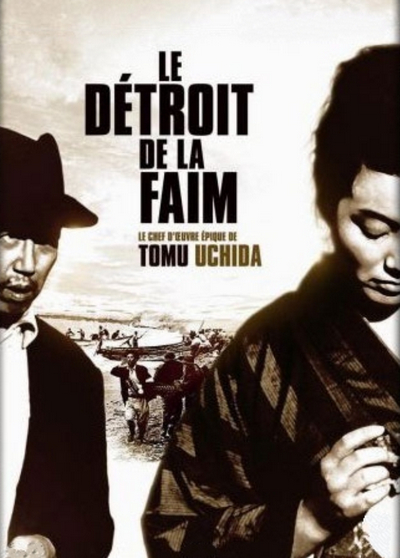 Quote:
A very complete article about Tomu Uchida :
Here some words coming from it and about this particular film :
“Straits of Hunger is a definite attempt on his part to essay the modernist style and subject matter then being mined by such as Imamura (whose work in my opinion it surpasses). By this time Uchida worked invariably in colour; for this film only, the grainy look of ’60s black and white ‘Scope was aped and intensified by the decision to shoot on 16mm before blowing up to 35. The film is the story of a criminal, Inukai, who escapes justice after a theft which caused the destruction of a Hokkaido town. A brief encounter with a prostitute leads her to become romantically obsessed with him; years later, seeing his photograph in the newspaper, she goes to look for him, only to be killed by him when she threatens to betray his now hidden past. The narrative construction is masterly. The film is divided into three segments, each of different timbre: the first, an action-packed account of Inukai’s flight; the second, a bleak and realistic study of the life in Tokyo of the lovelorn prostitute; the third, an account of the psychological duel between cop and criminal. The drama moves, with geographical symmetry, from the strait dividing Hokkaido from Japan’s main island of Honshu, through northern Honshu to Tokyo, then northward again to conclude at the strait. The symmetry gives the film a sense of inevitability, as the past exerts a controlling influence on the present.

Described by Donald Richie as a “working out of karma”, it’s also something of a reworking of such novels as Crime and Punishment and Les Misérables in its study of a man pursued by an obsessive cop and haunted by guilt from the past (10). As a novelistic drama, the film actually doesn’t quite work; where a novelist could dramatise and explain the criminal’s state of mind, the camera leaves a little too much to the viewer’s imagination, with the result that Inukai’s final suicide seems insufficiently motivated. Yet, as a study of various elements of post-war Japanese society, the film is remarkable. The struggle for material survival, the gradually growing wealth of the nation, the situation of women, the banning of prostitution are all concerns, and the film weaves a remarkable tapestry of the development of Japan in the post-war era. It could be argued, indeed, that the war is the repressed subject of the film: it opens in the late 1940s with a violent cataclysm, which might seem to stand in for the war; moreover, Inukai’s whereabouts and occupation in the war years are left deliberately uncertain. The criminal who conceals his past to go straight and achieve success as a businessman might be interpreted as a personification of his country, achieving material success after military defeat. May we infer that war guilt is the repressed which returns to destroy the protagonist? ”