Set at an indeterminate time in the near future, this routine, well-acted drama by Elio Petri tackles favorite Italian topics: religion and politics. A bit of macabre fantasy is added to the mix, but the end product remains somewhat muddled. Don Gaetano (Marcello Mastroianni) is a priest who is supervising a group of Christian Democrats on a religious retreat. The objective is to help these politicians purify their past wrongdoings, no matter how large or small, and live closer to God. The retreat takes place in a concrete bunker with plenty of small rooms for contemplation and icons set here and there to offer inspiration. Once the retreat begins, the politicos alarmingly begin to die off one by one. Don Gaetano wants them to get closer to God but did he mean that close?

Beginning with the socially-committed films of neo-realism, postwar Italian cinema became, perhaps even more than Italian postwar literature, a form that inherently tended to reflect and refract its own social and political context. It’s true that the august “founding fathers” of neo-realism such as Roberto Rossellini and Vittorio De Sica largely shied away from dealing directly with politics in their films but many of the second-generation postwar directors appear to have soon found themselves moving ineluctably towards a fully-fledged political cinema. The great Frances co Rosi is a case in point: an early Rosi film like La sfida (The Challenge, 1958) is able to explore the intricate and illicit networks of power that control the Neapolitan fruit and vegetable markets with only allusions to the presence and connivance of politicians but by 1963 a film like Mani sulla città (Hands Over the City) seems impelled to call the political spade by its real name.

By the end of the 1960s the explosion of worker and student discontent onto the streets in “the events” of 1968 ineluctably prompted an ever more openly political cinema. Significantly, in 1970 the Oscar for Best Foreign Language Film, which previously had only gone to poetic but politically anodyne Italian films such as Federico Fellini’s La strada (1954) and Le notti di Cabiria (Nights of Cabiria, 1957), was awarded to Elio Petri’s Indagine su un cittadino al di sopra di ogni sospetto (Investigation of a Citizen Above Suspicion, 1970), a film patently and transparently about the repressive and quasi-fascistic reaction of the conservative ruling elites in the face of the massive demand for real political change coming from the ranks below. And if 1968, as Umberto Eco was fond of putting it in later years, in a comparable country such as France lasted only a year, in Italy it came to last a decade, the grim and dark decade that came to be known as “gli anni di piombo” (the years of lead). In December 1969 a bomb in Milan’s Piazza Fontana killed 17 people and wounded 88, thereby initiating what would become an ever-increasing spiral of political terrorism perpetrated by a plethora of often mutually-antagonistic splinter groups from both the extra-parliamentary Left and Right.

By the mid 1970s the country was on the edge of chaos as political violence raged in the streets and fears of a neo-fascist coup d’état commingled with fears of what seemed like an inevitable electoral victory for the Communist Party. The Italian secret services – and there were a myriad of them – continued to infiltrate radical groups, sometimes creating their own fake groups in order to draw out the real terrorists, while the American CIA also intervened covertly in order to ensure that Italy would not fall into the Communist camp. The Vatican-backed Christian Democrats, who had ruled Italy continuously from 1948 through a system of opportunistic alliances with smaller parties and the corrupt practices of clientelism and division of state spoils, merely intensified their factional infighting in desperate attempts to retain their questionably acquired wealth and power. They were still at each others’ throats when, in 1978, Aldo Moro, then President of the party and leader of one of the left factions, was kidnapped and summarily executed by the Red Brigades.

Made in 1976 as this pandemonium was reaching fever pitch, Petri’s Todo modo represents perhaps the most uncompromising example of Italian political cinema. Whilst dutifully concluding with a disclaimer to any reference to reality, the film effectively presents an accurate, if grotesquely-designed and highly-expressionistic portrait of both the Christian Democrat Party in particular, and of the Italian situation more generally at the time.

Mischievously disingenuous, in typical Petri style, the disclaimer was justifiable at least to the extent that the film was an adaptation of a short novel by writer/intellectual Leonardo Sciascia. Published two years earlier, the novel was a culturally sophisticated and highly literary experimentation with the form of the murder mystery. The story is told in the first person by a painter and sometime writer of detective novels who one day, while driving in the countryside, chances upon a strange hermitage cum hotel. With no pressing engagements, he is drawn to remain at the Zafer Hermitage in order to observe the annual spiritual retreat about to be undertaken there by a large number of VIPs under the spiritual tutelage of the very ambiguous but captivating figure of a Jesuit cleric by the name of Don Gaetano. Cultured and well-read but also ominous and enigmatic, the novel’s Don Gaetano is explicitly connected with the uncannily bespectacled devil tempting St. Anthony in a 17th century painting by the Italian Mannerist painter Rutilio Manetti (1). The Loyolan spiritual exercises and the two murders that occur during the retreat are presented largely as a backdrop for the intellectual contest that develops between Don Gaetano and the unnamed first person narrator, who comes to be responsible (or not?) for the cleric’s own demise at the novel’s conclusion. Interestingly, for a murder mystery, the murders themselves are never solved and the reader is left wondering.

Petri’s filmic adaptation dispenses with the first person narrator together with all his refined intellectual musings and philosophical exchanges with the cleric. Instead, from the very beginning, the viewer is plunged into the midst of what appears to be a nation in crisis, visibly gripped by an unexplained but ever-spreading and highly contagious epidemic. In spite of the spiritual trappings – and the hollowness of the religiosity practised here is continually on show in the guise of the white, ghostly statues that seem nothing more than empty shells – the retreat for which the host of powerful prelates and politicians are gathering soon reveals its true nature as a fractious reunion of the factions of a ruling party. Don Gaetano’s ambiguous role as spiritual castigator in the novel is not only retained in the film but also magnified to the point of an apocalyptic exterminating angel, although always one with duplicitous and enigmatic motivations. Even more significantly, the role of “Presidente” only hinted at in the novel, is given so much more prominence in the film as to become, quite transparently, the figure of Aldo Moro. Moro’s role as both leader of one particular faction of the Christian Democrat Party and also as the great mediator and power-broker – the one who knew where all the bodies were buried, so to speak – takes centre-stage in the film in a stratagem that allows for both the ad nauseum factional infighting and the shameless and shameful division of the spoils of power by the party functionaries to be clearly shown.

This is clearly political filmmaking at its most committed, and Petri’s own left leanings come through clearly as the spiritual retreat cum party meeting becomes something of a satanic ritual and a descent into hell – the descent and dissolution of a ruling class, fighting to retain its privileges, but by extension that of an entire nation. Indeed, the ubiquitous and intrusive presence of closed-circuit television cameras throughout the film metonymically links the claustrophobic inside of the hermitage with the Italy outside, a country where by this time everyone is on file, everyone and everything is under continual surveillance. All to no avail, of course, since in spite of it all, the culprits were never caught and Italy remained – and remains to this day – the country of unsolved mysteries.

As a sort of anamorphic mirror held up to an entire nation, the film could hardly please and indeed it received a rather cold reception on all sides of the political fence. The film’s parodic portrayal of Moro came back to haunt it when two years later Moro was abducted in broad daylight by the Red Brigades and held for 55 days before being executed for what were deemed to be his political “sins”. The subsequent surge in public sympathy for him served, if anything else were needed, to consign Petri’s film to the dust-heap, and it was subsequently seldom screened.

In his review of Petri’s film at the time of its release, writer Alberto Moravia deplored the fact that it appeared to be motivated by nothing other than hatred for the ruling Italian political class, presenting it, as he put it, “in a grotesquely apocalyptic setting, as a clique of dead souls in bodies only provisionally still alive” (2). Moravia clearly regarded this as a questionable representation, and yet arguably he himself may have been remembering nothing less than Dante’s characterisation of some of the worst sort of political traitors in the depths of the Inferno (3). Perhaps it may be an exaggeration to equate Petri with Dante but, like Dante in the Inferno, Todo Modo does furnish us with a caustic, expressionistic socio-political portrait of Italy during some of its darkest hours. 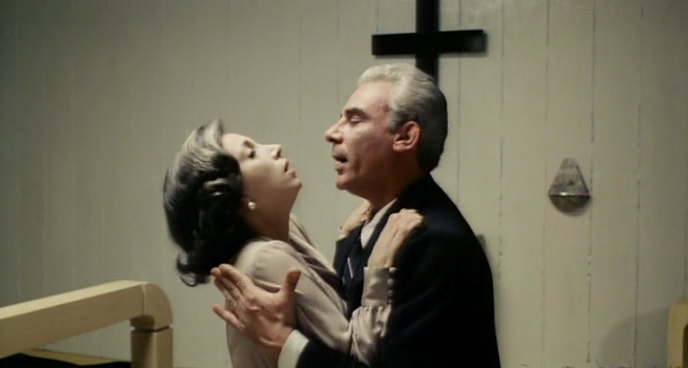 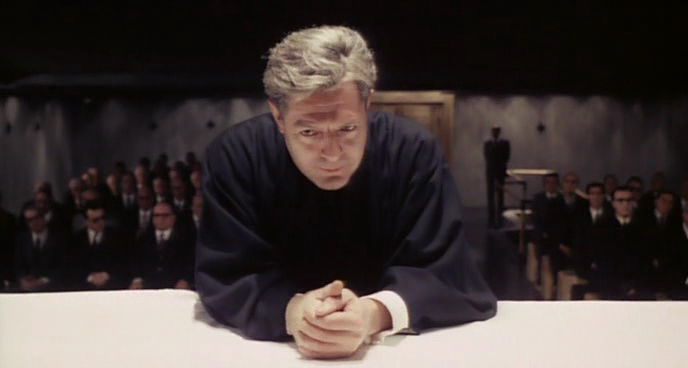 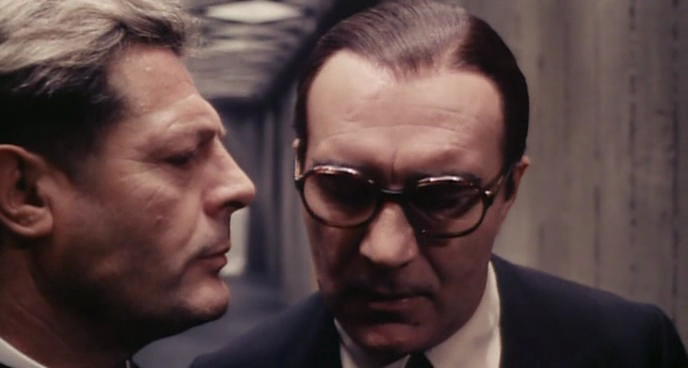