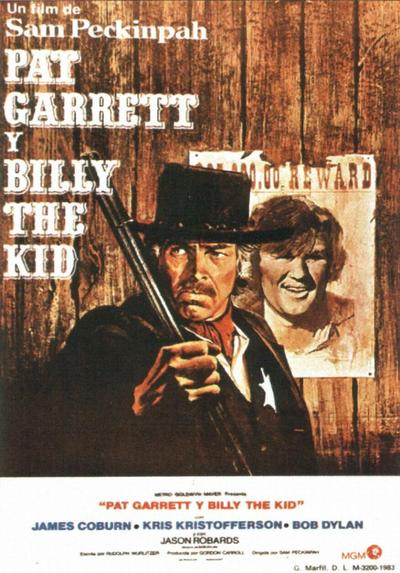 It’s 1881 in New Mexico, and the times they are a’changing. Pat Garrett, erstwhile travelling companion of the outlaw Billy the Kid has become a sheriff, tasked by cattle interests with ridding the territory of Billy. After Billy escapes, Pat assembles a posse and chases him through the territory, culminating in a final confrontation at Fort Sumner, but is unaware of the full scope of the cattle interests’ plans for the New West. -imdb

Review:
A low-key appraisal of the legend, and the times in which he lived, Pat Garrett and Billy the Kid is a strange and convincing Western. Set in the final decades of the Nineteenth Century, this is a period of flux for the United States. In New Mexico, powerful cattle barons consolidate their holdings, squeezing smaller concerns into suffocation. With laws now becoming executed, rather than interpreted, outlaws like Billy the Kid (Kris Kristofferson) have less room for manoeuvre. No longer is it possible to shoot a stranger and walk away by claiming self-defence, as Billy is about to discover. His one-time partner Pat Garrett (James Coburn) has just been elected Sheriff and Pat’s first duty is to run Billy out of the country.

Being that they are old friends and all, Pat decides that it’s only fair to give Billy a warning. After all he’d rather not get into a meaningless gunfight if he doesn’t have to; living to a ripe old age is a much more attractive proposition. Billy is far too cocksure to take the hint though, naively certain that the good times will continue forever. What he doesn’t realise is that the authorities will no longer tolerate outlaw activities, especially when the person doing the law breaking is as infamous as Billy. Gathering a few trusted friends around him, Billy goes to ground in one of the many abandoned shacks littering the State. His theory is that Pat will give up the chase with only a token effort, to appease his employers; how wrong can a man be!

A companion picture to The Wild Bunch, being set in a similar period, Pat Garrett and Billy the Kid takes an entirely different approach. Here the focus is upon people rather than situations, with the title characters casting inky shadows over a memorable selection of ruffians. Both Pat and Billy have served on either side of that flexible line separating the lawful from the lawless, giving them remarkable insight into each other’s mind. So although Pat is in the pay of powerful landowner Chisum (Barry Sullivan), while Billy remains a free spirit, this arrangement is the result of luck more than design. As director Sam Peckinpah makes clear, Pat and Billy are essentially similar in nature; each will kill whomever they need to. The problem is that since this is the Old West, men must play their given hands to the full; there’s no mediation or alternative path here. Since this means that there’s little in their motives on which to discriminate, subtle personality shadings become significant in Peckinpah’s hands.

The impact of this restraint is that Peckinpah creates a world within which real people live and breath. To every scene in Pat Garrett and Billy the Kid there is a background, where unknown folk play cards, cook food, make love and shepherd their children. Such attention to detail makes this Western a rich and stimulating environment, far removed from the sterility of so many other films; this is perhaps Peckinpah at his greatest. Elsewhere, despite the best efforts of six editors, distinctive Peckinpah touches leak in — his application of slow motion freeze frame and effective crosscutting. The opening sequence, as seen in the 122-minute restored print, jumps between the future shooting of Pat Garrett and the present gunplay of Billy. Where a bullet is fired in one timeframe, the wound appears in the other, inextricably linking the two figures. To add a certain poignancy, sweeps of motion are caught in mid-flight and washed in a sepia tone; audience manipulation at its best.

Central to Pat Garrett and Billy the Kid, in step with the direction, are the stellar performances of Kristofferson and Coburn. Given their history as comrades, there is an unmistakable dynamic between them; one of respect and kinship. As the inexorable pursuit unspools both of them journey from place to place, visiting ghosts from their past. The difference lies in how they cope with the changing values of the time. Coburn seems resigned to the transition, concerned about safeguarding his future yet patently uncomfortable, while Kristofferson does his best to ignore the inevitable. Sadly each will be destroyed by the new dawn — leaving behind them a trail of corpses. The best part is that some great names (e.g. Chill Wills, Slim Pickens and Dub Taylor) populate this long list of victims. Peckinpah certainly knew how to pick a cast That belonged in the Old West.

Completing Peckinpah’s complex and all-inclusive vision, John Coquillon’s photography remains striking. Filling the generous screen width with people and their trappings, Pat Garrett and Billy the Kid is beautiful in a downbeat way. The biggest weakness is the unstructured narrative, a major barrier to comprehending the story’s central third. Here the tale is difficult to follow, wandering aimlessly across the plain, intent on introducing a stream of bit parts. Interesting maybe, but also spotty and further clouded by the often-indistinct dialogue. In fact this last point is a real disappointment, given that the script is attractively dirty and direct — people say what they have too with little elaboration. So, Pat Garrett and Billy the Kid is a terrific Western with rather too many studio battle scars. Oh for what might have been!