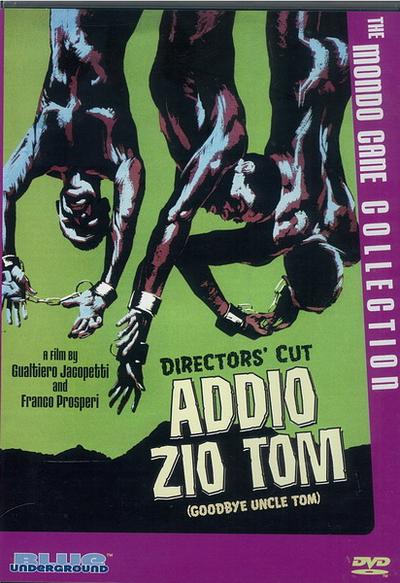 Gualtiero Jacopetti and Franco E. Prosperi, best-known for the groundbreaking shockumentary Mondo Cane, directed this bizarre and shocking look at slavery in America. Set in the deep South prior to the Civil War, Zio Tom finds Jacopetti and Prosperi travelling back in time aboard a helicopter to investigate the nuts and bolts of slavery as it happened in the United States prior to abolition. Along the way, the filmmakers go aboard a slave ship as frightened Africans are brought to America under inhuman conditions; they witness the dangerous and degrading process by which slaves were made ready for market; and they visit a “breeding farm” for slaves after laws prohibit the importation of slaves from abroad. Also included is a sermon from a preacher who argues for the moral and spiritual necessity of slavery (while another man speaks out against it strictly on grounds of economics and practicality); the contrasting thoughts of men and women on the matter of miscegenation; and an interview with an educated slave who feels his circumstances are better for him than conventional employment. Also shown is the brutal torture and punishment of slaves for any number of real or imagined grievances. Re-creating both the opulence and the ugliness of the Old South on a grand scale, Zio Tom concludes with present-day African-Americans reading The Confession of Nat Turner and contemplating violent overthrow of the white-dominated culture. Understandably controversial, Zio Tom received a very brief theatrical release in the United States under the title Farewell Uncle Tom, where it received an X rating from the MPAA despite being trimmed by approximately 20 minutes from its original Italian running time.