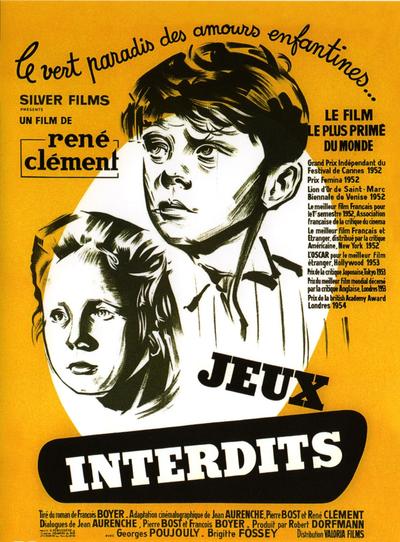 Quote:
Parisians flee into the countryside, strafed by German planes. Her parents shot, a small girl (Brigitte Fossey) wanders into the countryside, finding refuge with a peasant family. She and their youngest son (Georges Poujouly) form a liason against the adults. The French authorites hated it, but the film triumphed abroad and confirmed Clemént as a director of compassion and brilliance. 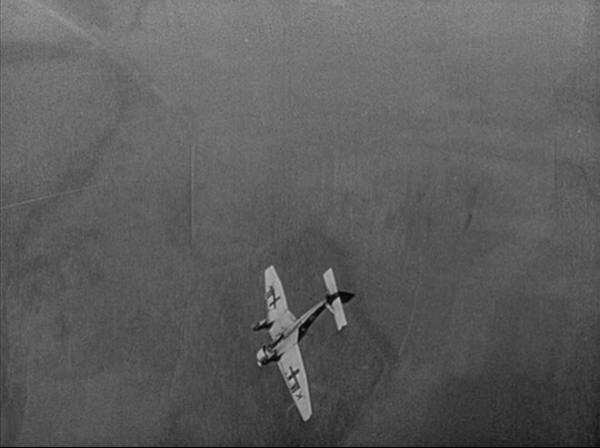 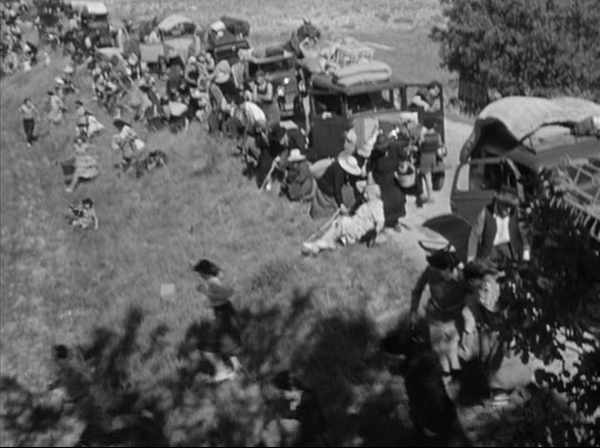 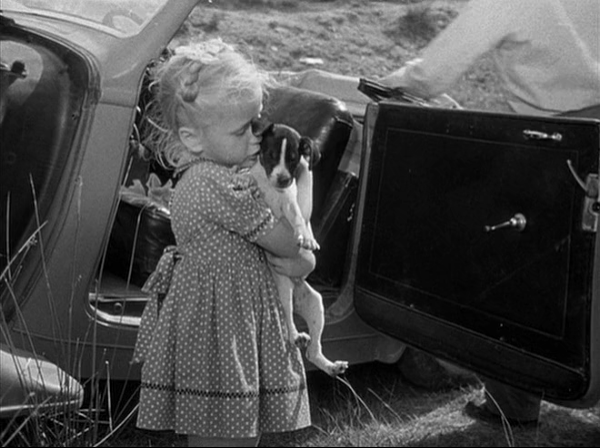 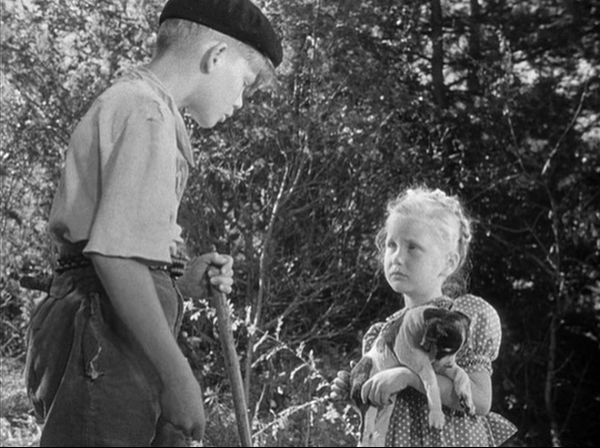 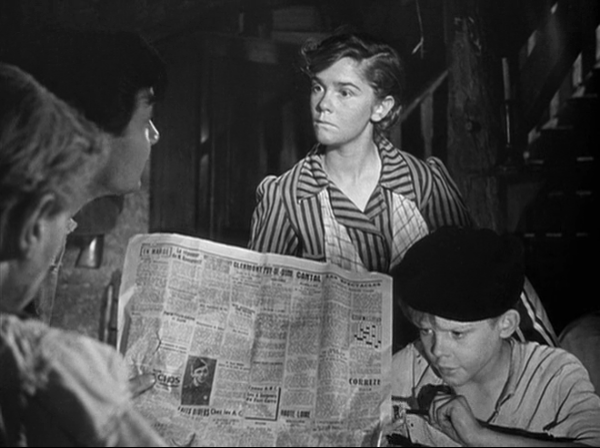 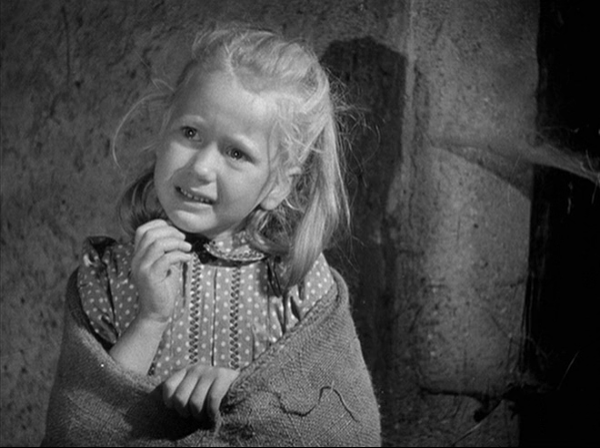 Quote:
We must turn to the past for a film as innocent as “Forbidden Games” (1952), because our own time is too cynical to support it. Here is a film about children using their powers of fantasy and denial to deal with death in wartime. A modern film would back away from the horror and soften and sentimentalize it. It would become a “children’s film.” But in all times children have survived experiences that no child should have to endure.

Sometimes they’re able to shield their innocence by creating games to process the pain. “Forbidden Games” was attacked and praised by adults for the same reason: because it showed children inventing happiness where none should exist. The Japanese animated film “Grave of the Fireflies” (1988) is another rare film with the courage to walk this path.

The film begins during the Nazi invasion of France in 1940. We meet a 5-year-old girl named Paulette, with her parents. The road out of Paris is clogged with those escaping the city. It is being strafed by Nazi fighter planes. Paulette’s little dog runs onto a bridge. She chases it, and her parents desperately run after her. Bullets kill both parents and fatally wound the dog. Paulette, lying on the ground next to her mother, reaches out a hand to touch the dead cheek, and then touches her own cheek. She does not cry. She does not quite understand. She holds her puppy. Its legs jerk spasmodically for a long time before it dies.

She is given a ride by strangers. The man throws her dog into the river. She jumps off their cart and runs down to save the dog, and is seen by a young local boy named Michel, the young son of the Dolle family, peasants on a nearby farm. She is taken in by the Dolles and immediately becomes Michel’s favorite. He will give his blanket to her. He will demand that the family keep her. He will have a playmate.

The love between the two children is almost too pure and simple to be believed — unless you can remember being a child. For some reason, we remember best the children we hated, or who hated us. But with a playmate we can construct a world so compelling that all our thoughts are given to its creation and maintenance. With Jackie, the girl next door, I spent days building a toy village on the dining room floor, around an electric train set. It was so elaborate, so invested with our stories of what each house meant, that when it had to be “cleaned up,” we felt a hurt no adult could imagine.

Paulette (Brigitte Fossey) determines to bury her dog. Michel (Georges Poujouly) helps her, because she isn’t big enough to handle the hoe she has stolen. The grave is hidden in an abandoned mill. They need a crucifix for it, and Michel hammers one from lumber. Paulette has never really dealt with the deaths of her parents. She acknowledges that they are gone, but they are gone in theory, not practice; that they are truly dead forever seems to elude her. Yet she becomes fascinated with death, and Michel joins her in burying a mole that was captured by an owl. Soon they are burying every dead thing they can find, even worms, even broken plates. At one point, while they are lying side by side on the floor doing his homework, he stabs a cockroach with his pen. “Don’t kill him! Don’t kill him!” she cries, and he says, “I didn’t. It was a bomb that killed him.”

Close study of this scene reveals a curious detail. She presses to the ground as she cries out, and we cannot see her face. If we happen to look at Michel’s face, we will notice that his lips are moving, although we do not hear his voice. Clearly the scene was constructed in the editing room, matching her voice to visuals that did not match. That’s possibly an indication of the difficulties the director, Rene Clement, had in directing children so young in a story so fraught. But for the most part the children are astonishingly natural and convincing, and in an interview much later, Fossey remembered with a smile that Clement asked her to cry “a little more” or “a little less” and she fine-tuned her tears.

Their cemetery grows larger. They begin to steal crucifixes to put above the graves. Paulette, who does not know her prayers, or about the Stations of the Cross, or what a crucifix is, must be Jewish. Michel innocently teaches her, and that knowledge could eventually save her life. There is a comic subplot involving a rural feud between the Dolles and their neighbors, the Gouards, who accuse each other of stealing crucifixes; at one point a fight in the cemetery ends with two brothers fighting and falling into a grave. All the while the secret cemetery in the old mill grows more elaborate.

“Forbidden Games” was the first feature by Rene Clement; his short film on the same story was seen by the director Jacques Tati, who told him it must become a feature. It came (as Tati did) from outside the French film establishment; its producer, Robert Dorfmann, had powerful enemies.

The film was initially turned down by Cannes, then accepted after a scandal. It was turned down by Venice because it had played at Cannes, but accepted after another uproar, and won the Golden Lion as best film, with a best actress award for Fossey (she grew up to make many more good films). It won an honorary Oscar in 1953. Yet one critic said the film itself should be forbidden. Clement was accused simultaneously of trivializing the war and inflicting its horrors too mercilessly on his actors. Leftist critics accused him of an attack on the working class, although his poor peasant farmers are the most warm and generous of characters.

To be sure, it is remarkable that Fossey was able to weather this experience at 5. Poujouly, her co-star, was 9 or 10. She remembers doing better than older actresses at the audition because she had no idea what stakes were involved; they were nervous, but she just went ahead and did as she was told. Clement “shot around” her character as much as possible, shooting close-ups of her looking at events so she did not really have to witness them, and she remembers attending the premiere at Cannes and seeing the planes attack the bridge for the first time. She was horrified.

The beautifully restored new Criterion DVD of the film includes an alternate beginning and ending, filmed but never used, in which the scenario is framed as a “story” from a book that Michel reads to Paulette.

The film is so powerful because it does not compromise on two things: the horror of war and the innocence of childhood. Fossey’s face becomes a mirror that refuses to reflect what she must see and feel. She transposes it all into the game of burying the dead and placing crosses over them.

The cinematographer, Robert Juillard, always places a little additional light on her face and blond hair, suggesting an angel without insisting on it. Only gradually do we come to understand the total power that their fantasy has over the children, and what measures they will take in its defense. It is funny, also sad, when Paulette fixates on every crucifix she sees, and Michel confesses the theft of some crucifixes and then pauses on his way out of the confessional to try stealing another one from the altar.

Movies like Clement’s “Forbidden Games” cannot work unless they are allowed to be completely simple, without guile, transparent. Despite the scenes I have described, it is never a tear-jerker. It doesn’t try to create emotions, but to observe them. Paulette cannot speak for herself, and the movie doesn’t try to speak for her. That’s why it is so powerful: Her grief is never addressed, and with the help of a boy who loves her, she surrounds it with a game that no adult could possibly understand, or penetrate.