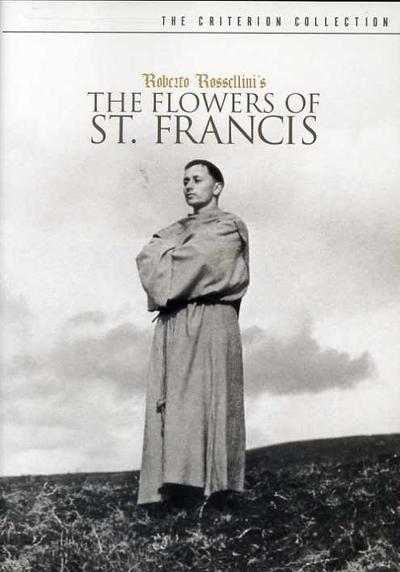 Quote:
The Flowers of St. Francis—or, Francesco, giullare di Dio (Francis, God’s Jester), to give it its full title in Italian—is a delicate, fascinating hybrid, a film that is self-consciously, almost militantly, naive, and, as such, something of an anomaly in Rossellini’s body of work. Never again would his films attain the directness, simplicity, even purity that is so gloriously on display here, a work poised between the theological and the historical, between the Rossellini who emerged from neorealism into the full-blown spiritual crisis manifested in The Miracle, Stromboli, and Europa ’51, all set in postwar Italy, and the latter-day director whose abiding interest was in the depiction of history. Those later works often took religious subjects, but unlike in Acts of the Apostles, Augustine of Hippo, and The Messiah, Rossellini in The Flowers of St. Francis is less concerned with creating a portrait of a particular historical figure than he is with exploring the nature of spirituality, specifically, of “Franciscanism” itself and its impact on the medieval world.

His effort to capture this spiritual essence is astonishingly holistic, with every aspect of the film’s narrative and visual style seemingly serving that end. Fundamentally, Rossellini refuses to single out Francis, thus decentering him and insisting on his status, first and foremost, as a member of a group. Similarly, while some critics have complained that Brother Ginepro, the foolish monk around whom many of the unconnected episodes revolve, is accorded too much importance in the film, at the expense of Francis, it is clear that this is a crucial and conscious tactic.

Related to this question is Rossellini’s clear didactic purpose in making the film. As in his other work of this period, he was concerned with the despair and cynicism facing postwar Europe, and unashamedly offered Saint Francis and his philosophy as an answer, as a way back to an essential wholeness. The “message” of The Flowers of St. Francis is stubbornly old-fashioned, as Rossellini told students at the Centro sperimentale di cinematografia, in the early sixties: “It was important for me then to affirm everything that stood against slyness and cunning. In other words, I believed then and still believe that simplicity is a very powerful weapon . . . The innocent one will always defeat the evil one. I am absolutely convinced of this. And in our own era we have a vivid example in Gandhism . . . Then, if we want to go back to the historical moment, we must remember that these were cruel and violent centuries, and yet in those centuries of violence appeared Saint Francis of Assisi and Saint Catherine of Siena.” Obviously, it took courage for Rossellini to offer such transparently “retrograde” values to a modern audience, and part of the film’s radicalism lies in its fearless exposure of the director’s vulnerable idealism.

Even more radical is Rossellini’s formal technique, which relies overtly on discontinuity, fragmentation, and a productive tension between the extremes of realism and stylization. In narrative terms, The Flowers of St. Francis is utterly unconventional, with the sketch, the vignette, and the illuminating anecdote favored over a doggedly linear exposition. There is almost no plot, and scarcely more characterization. Aside from Ginepro’s violent encounter with Nicolaio the Tyrant and his men, we get little more than humorous misunderstandings about needing a pig’s foot to make soup (Ginepro “convinces” a still-living pig to donate its appendage); Francis gently telling birds to be quiet so he can pray; and the loving, simple preparations for the visit of Sister Clare. The individual scenes from The Little Flowers of St. Francis and The Life of Brother Ginepro—story collections published after Francis’s death—that are chosen for “dramatization” do not seem inevitable, nor do they really cohere (as some have complained), but, then again, they were never meant to. Rather, an atmosphere of sanctity is created and a minimalist structural system of opposites elaborated, in a denuded and thoroughly unrealistic setting. In this atmosphere, narrative is continually defeated in favor of the incomplete, the aleatory, and the suggestive poetic anecdote that is, narratively, a dead end but that illuminates a stylized world of symbolic values. Henri Agel described this technique as Rossellini’s “aesthetic of insignificance” or “banality,” and it points toward the challenging antinarrativity of Michelangelo Antonioni’s films of the early sixties. History—or better, historiography—on the other hand, is linear, fully elaborated, logical, supremely rational, and above all, coherently narrated. Thus Rossellini must necessarily reject its methodology to remain true to the “divine madness” that afflicted Saint Francis and his followers and their crazy world of faith.

One of the most interesting things about the film is that it seems to occupy the same kind of ambivalent, complicated medieval space, simultaneously realistic and stylized, that is the hallmark of Dante’s Divine Comedy (and that Ingmar Bergman was also to capture seven years later, in The Seventh Seal). On the one hand, the film is imbued with the rough graininess of neorealism, which allows us to feel the monks’ scratchy tunics and the drenching rain. Yet, at the same time, The Flowers of St. Francis flaunts its visual stylization. Rossellini used the art of the period as a kind of model or template to teach us how to watch the film, very consciously shooting it with the severe simplicity of medieval art. For example, at one point, Francis lies down in the mud so that the friars can walk on him and thus humiliate him; the arrangement of the bodies and the overall composition of the frame seem clearly taken from Giotto’s depiction of Saint Francis’s death, in the Arena Chapel, in Padua. Throughout, we see the monks in almost total isolation from any “real” world, functioning, like medieval art, symbolically, as an emblematic community of the possible. The shots are continually flattened to eliminate perspective, thus putting man and nature on the same level and suggesting the two-dimensionality of the highly symbolic space of medieval art, before the conquest of “realistic” Renaissance perspective, which entails an entirely different worldview. This pictorial flattening creates a kind of minimalist paysage moralisé out of the monks’ simple community, a stylized, antirealistic locus of genuine Christian kindness and joy. 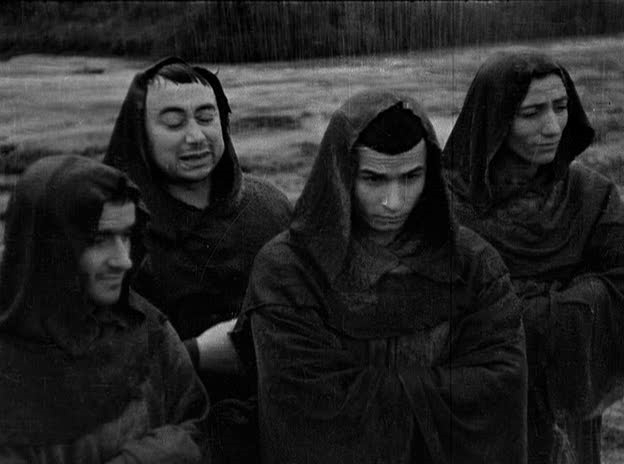 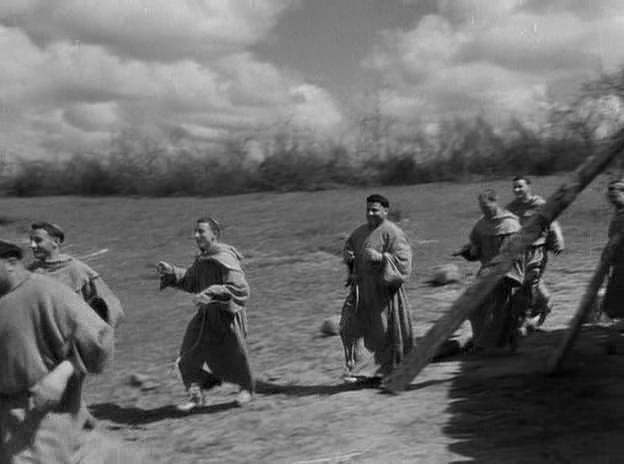 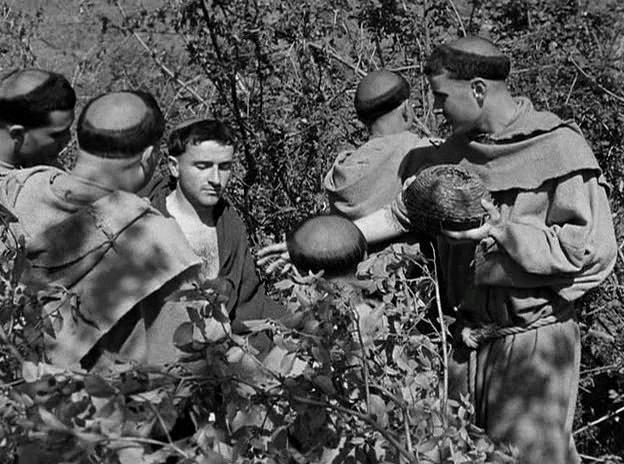 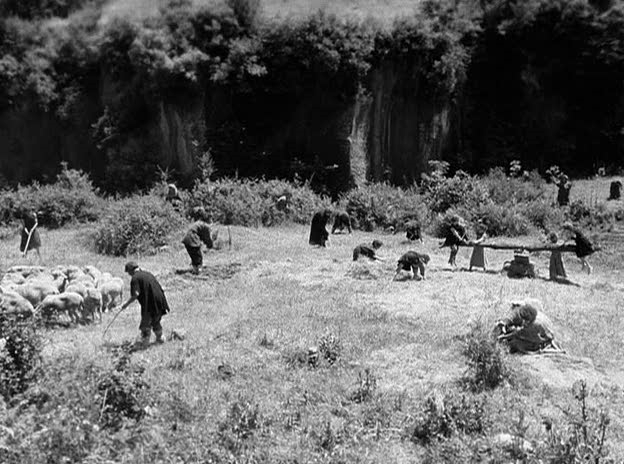 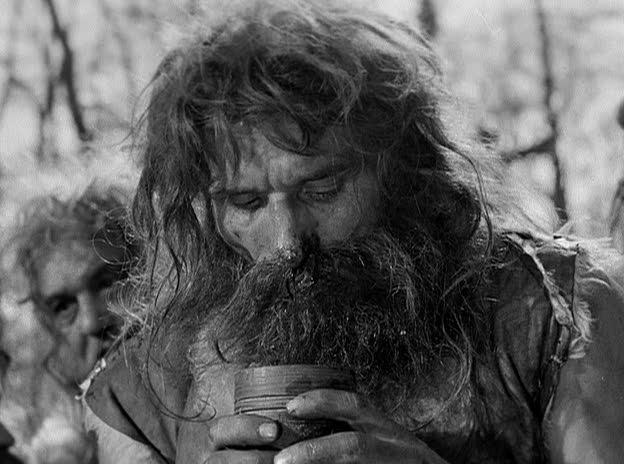 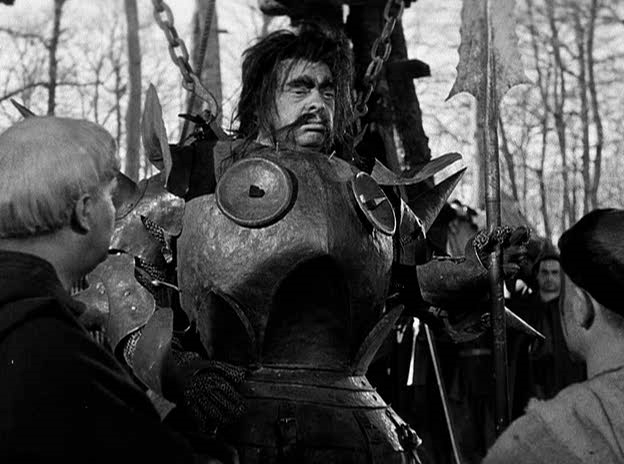