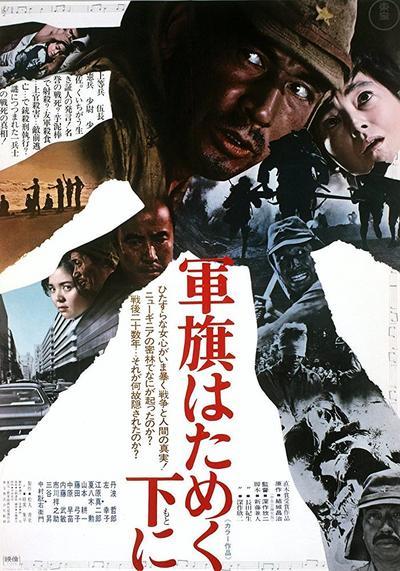 First of all I have to say that this film is really tough.

It’s a bit like Rashômon. A widow wants to find out the truth about her husband being apparent executed in the Second World War by Japanese soldiers.

But the administration isn’t ready to hand out the documents about his dead. So the woman (Hidari Sachiko) tries alone to find out what really happened, by questioning four survivors who knew her husband. And everybody tells a different story (that’s why I compare it with Rashômon, although they are set in different sceneries) and they have different opinions about the dead husband. The end turns out to be more horrible than any of you hard-boiled-audition-viewers might expect. Sorry, just kidding. Kinji Fukasaku does its best to disturb the audience. Compared with Battle Royale, Gunki hatameku motoni is much more real and in its way not entertaining at all, what Battle Royale certainly was.

Now here its different. You see real WW2-documental shots mixed with directed scenes. So you never forget what the film is about: Reality. He uses the story of the woman to bring the horror of war to the audience in a rather psychological way. With wanting Hidari Sachiko to know what really happened to her husband, the audience learns a lot more about the terror which reigned the battlefields of New-Guinea. Burned-out, hungry troops, sadistic generals blinded by ultra-nationalism, massacre, torture and finally cannibalism, there’s nothing better to expect. There isn’t for the audience either.

The movie has no happy end. Its one of the most disturbing and pessimistic films ever made. Mixed with the documentary and the sad fate of the woman, this film is also a fable for the consequences of a war not so long ago. Which is not common in Japan, where it still remains a taboo. So the audience has learned something when the film ends. However, this is how I consider this film. It might be different for other people. My brother watching it with me, was stunned. But some people left the theater as well. I only recommend it to anybody who liked both “Paths of Glory” and “Bullet in the Head” or who is interested in Japanese History and its problems anyway.