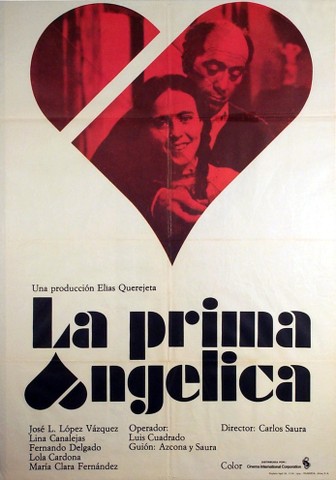 Quote:
The initial idea for the film came from a specific reference to a cousin Angélica, in a scene from Ana and the wolves (Spanish: Ana y los lobos), director Carlos Saura’s previous work. In Ana and the wolves there is an inconsequential bit of dialogue that occurs in the private conversation between the family matriarch and the title character. The old woman speaks of a certain cousin Angélica who, as a small child, coquettishly played with one of her sons. Building on that allusion, Saura and writer Rafael Azcona developed a script about the childhood memories of a man now in his mid forties and his flirtatious cousin, Angélica, on whom he had a crush when he was ten years old. These memories become the lure for the protagonist’s reencounter of his long suppressed past.

The film is told as a labyrinthine montage of recreated memories that surface in the waking consciousness of the vanquished past that the protagonist cannot bring himself to confront. The problem for Saura was how to integrate past and present in a coherent narrative. A character who will continuously and seamlessly move form one period of time to another without resorting to the habitual flashback, but rather showing a past which is constantly being recaptured and lived as a present. The idea for this came from a phrase from Ramón del Valle-Inclán : ” Things are not as we see them, but as we remember them ”

Saura described Luis, the main character in the film a someone who was profoundly touched by the Civil War. Personally, Saura explained, “ I never agreed with the widespread idea that childhood years are the golden years of one’s life – maybe because of my own experiences. On the contrary, it seems to me that childhood is a particular uncertain period because, among other reasons, one’s childhood is lived almost entirely in an in-between world, and unfolds in a world of great fears and great needs of all kinds. And all of that leaves profound, indelible scars, particularly when one has to live in a hostile environment, like the main characters in the film.

The theme of interdicted history, the Spanish Civil War years as remembered by a child of Republican parents, Saura confronted the censors. The film’s sense of liberation comes from its directness in depicting a number of scenes in which the Nationalist cause is either ridiculed or presented as inspired more by petty animosity than by patriotic or religious fervor.

Given its political subject matter, the first two versions of the script were rejected outright by the censors. A third version was finally approved and, after some delays, the finished film was accepted for distribution without cuts.

Reception
Upon release, the film confronted a violent press reaction from the Spanish Right; La prima Angélica was to enter the public consciousness in ways no other Spanish film had.[5] It was to cause a national furor as well, which surpassed in its scope and intensity any of the previous scandals surrounding Spanish film during the Franco years. The Madrid opening was the occasion for violent audience reactions at a number of sessions. Newspapers reports of booing and shouting during the screening and of menacing protest in front of the theater only seemed to fan the flames of public controversy. It was about this time that the film was selected to be shown in the Cannes film festival to represent Spain. In the middle of the Cannes film festival, news came that the Madrid run of La prima Angélica had been further marred when masked youths broke into the projection booth and stole two reels of the film. This kind of notoriety created sympathy for the film at Cannes, yet the festival judges chose not to award Angélica any of the regular prizes. Instead, a special award was given to Saura. The Spanish conservative press attacked the award as part of a foreign conspiracy against Spain’s honor by praising the detractors of the heroic struggle for National liberation.

The producer, Elías Querejeta, was pressured to make some cuts, in particular to a scene in which a character who breaks his arm has it set in plaster in a fascist salute. Querejeta emphatically refused: ”Legally, I am the only one who can cut the film and I refuse to delete even a single frame”. The failure to persuade Querejeta to authorize cuts made the head of the information Ministry resign his post.

The film eventually returned to a more or less normal distribution in Spain, although newspapers attacks and protests at screenings continued. The Barcelona Theater where the film was having a successful run was firebombed in July 1974, and thereafter, domestic distribution of Cousin Angélica was suspended. Though never officially banned, the film posed a risk to theater owners fearful of repetitions of the incidents that hampered the Madrid and Barcelona showings. The controversy in Spain only intensified the interest of foreign audiences. Despite the climate of hostility that surrounded it, fueled by the notoriety of the scandal, La prima Angélica was Querejeta and Saura’s first formidable box office success, grossing eighty million pesetas by the end of 1975.

The film was also selected as the Spanish entry for the Best Foreign Language Film at the 47th Academy Awards, but was not accepted as a nominee.