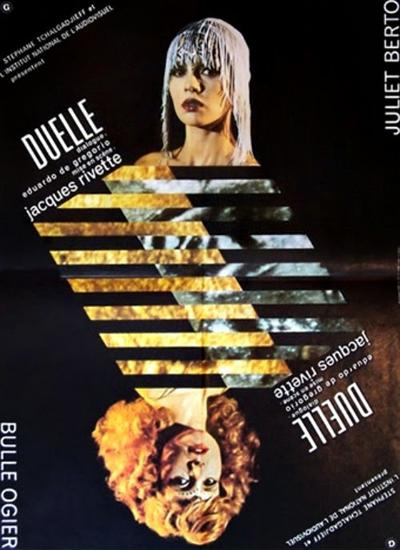 It all began (as things Rivettian tend to do) auspiciously enough. There were to be four films in a series originally entitled Les Filles du Feu (after Gerard de Nerval) before the more expansive Scenes de la vie parallele replaced it. Each would center on a “non-existent myth” of a battle between goddesses of the sun and the moon for a mysterious blue diamond that has the power to make mortals immortal and vice versa. Each film was to be in a different genre: a film noir, a pirate adventure, a love story, and finally a musical – the last-mentioned of whose scenario particulars hadn’t been completely worked out when the four-film project went into production. Two films were ultimately completed – Duelle (the film noir) and Noroit (1976, the pirate adventure). But two days into the shooting of the third, Histoire de Marie et Julien the metteur en scène (as Rivette always chose to call himself, auteurism be damned) suffered a nervous breakdown, and the entire project fell apart – though traces of it linger in Merry-Go-Round (1981, a paranoid conspiracy jape that has everything but the goddesses) and the semi-demi-musical Haut/Bas/Fragile (1995). 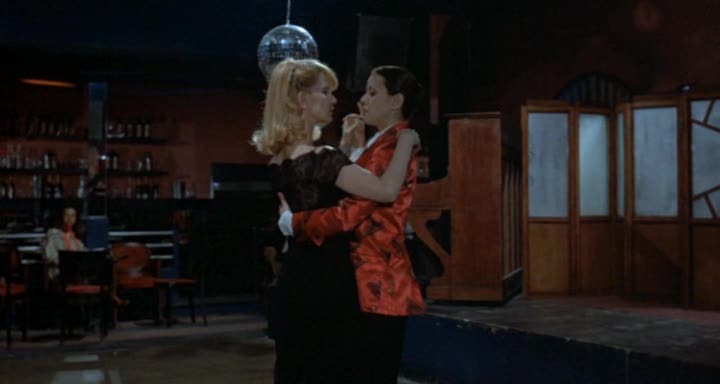 Out of the original Scenes project, only Duelle was released in France. Noroit had a cursory premiere in Germany but never in its native country. As for Histoire de Marie et Julien, the few days of shooting Rivette managed to accomplish with Albert Finney and Leslie Caron were scrapped, and the project – clearly dear to his heart – was resurrected in 2003 with Jerzy Radzilowicz and Emmanuelle Béart replacing Finney and Caron, with its story concerning a ghost becoming human replacing the goddesses and the blue diamond. But so much about both cinema and Rivette had changed in 27 years, that Historie de Marie et Julien has next to nothing to do with Duelle and Noroit. Suffice to say that Scenes de la vie parallele was born of an era when Rivette (mistakenly) surmised that there was a large and growing audience of cineastes longing for a cross between Kiss Me Deadly (Robert Aldrich, 1955) and Les Dames du Bois de Boulogne (Robert Bresson, 1945). What we’ve mostly seen instead is a mob of dissolute “fanboys” panting for the “grindhouse” detritus dear to Quentin Tarantino’s heart. 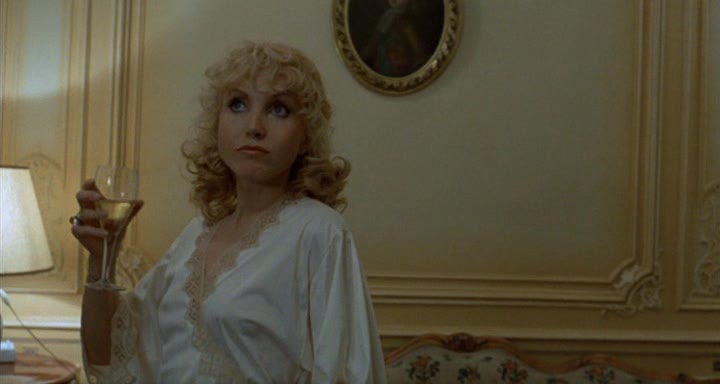 Prior to the shooting of Duelle Rivette assembled the cast and screened Val Lewton and Mark Robson’s The Seventh Victim (1943) for them. And indeed there’s a great deal of that 40s thriller about a Greenwich Village satanist cult killing off recalcitrant members in Rivette’s film. But from the very first sight of Nicole Garcia’s Elsa (Or is it Jeanne? Plenty of ambiguity there already) in her Cloris Leachman-styled raincoat confessing ashamedly to Bulle Ogier’s Sun Goddess Viva that she works as a “dancer”, we’re taken back to that celebrated film maudit – beloved of the cinematic cognoscenti while falling short of the ever-exalted goals of its creator Robert Bresson. 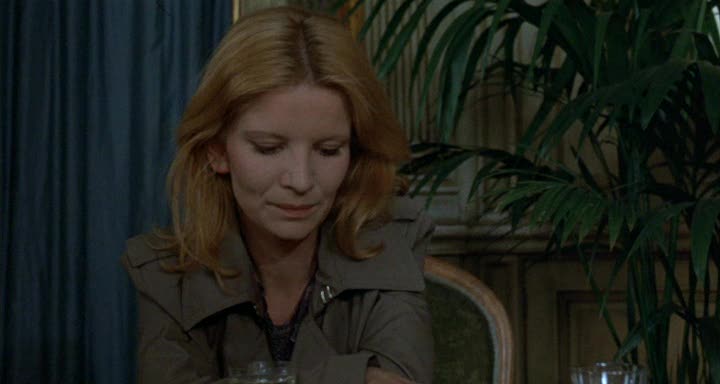 Adapted from a passage in Denis Diderot’s Jacques le Fataliste, and filmed during the Occupation, Les Dames du Bois de Boulogne boasts dialogue by Jean Cocteau, and a richly iconic performance by Maria Casares. Both figures hover over Duelle, in the Casares-like turns of both Ogier and her Moon Goddess adversary Leni, played by a startlingly chic Juliet Berto. However it’s Garcia who gets to say “Je me vengerai”, as she’s the mortal who suffers most for gaining possession of the mysterious diamond via her thankless lover Pierrot, played by Jean Babillee – a dancer for whom Cocteau created the ballet “Le Jeune Homme et la Mort”. The most important Cocteau connection is the film’s “alternate text”, Cocteau’s seldom-staged verse drama The Knights of the Round Table. As Rivette disclosed, in an interview published in this very journal, 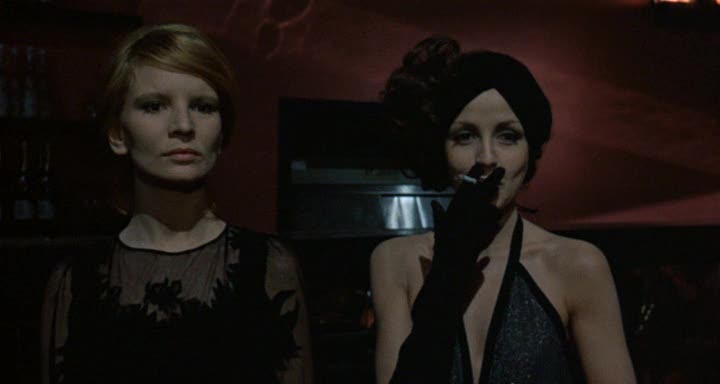 Cocteau is someone who has made such a profound impression on me that there’s no doubt he’s influenced every one of my films. He’s a great poet, a great novelist, maybe not a great playwright – although I really love one of his plays, The Knights of the Round Table, which is not too well known. An astonishing piece, very autobiographical, about homosexuality and opium. Chéreau should stage it. You see Merlin as he puts Arthur’s castle under a bad charm, assisted by an invisible demon named Ginifer who appears in the guise of three different characters: it’s a metaphor for all forms of human dependence.The Captive Lover – an Interview with Jacques Rivette 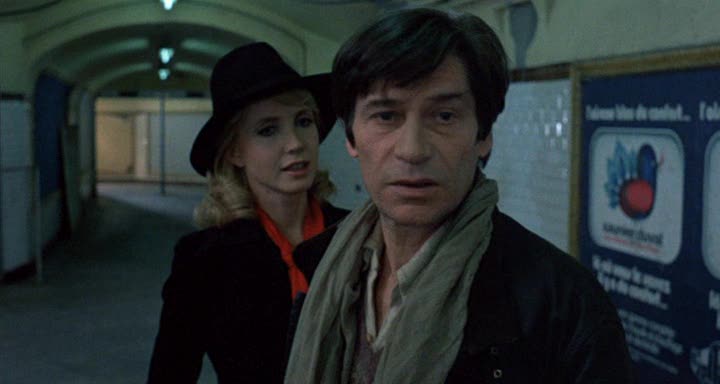 While one awaits Chéreau’s staging, it’s more than sufficient to contemplate its impact on Duelle. Our innocent heroine (Hermine Karaghuez instantly recalling Betty Schneider in Paris nous appartient) recites lines from Cocteau’s play as a kind of incantation, much as Geraldine Chaplin reads lines from Cyril Tourneur’s The Revenger’s Tragedy in Noroit. But that reworking of Fritz Lang’s Moonfleet and Tourneur’s (Jacques bien sur) Anne of the Indies (1951) is enacted on a rocky island of no temporal or spatial specificity. Duelle takes place in an eerily unpopulated Paris in a perpetual twilight (the neo-Joycean Twhylight is the film’s alternate title) where it always seems to be just before dawn. The settings are completely real, yet appear to have been created in order for Rivette to discover them: an aquarium out of The Lady From Shanghai (Orson Welles, 1947), a jardins des plantes redolent of greenhouse at the start of The Big Sleep (Howard Hawks, 1946), a dance club called Le Rhumba out of Criss Cross (Robert Siodmak, 1949), and a ballet classroom that evokes Pandora’s Box (G.W. Pabst, 1929) – with Berto in a hairdo (and accompanying manner) remindful of Valeska Gert in Renoir’s Nana (1926). Most important of all there’s Jean Weiner – a composer who has lent his talents to films by Renoir, Duvivier, Franju and Bresson. But what he’s here for is to recall his days as a pianist at Cocteau’s favorite hang-out Le Boeuf sur le Toit. And thus he is live on the set spinning out improvisations in numerous scenes in the film’s first three quarters – with the characters treating his visible presence as no more noteworthy than any other aspect of the setting. While he’s joined by a small ensemble to serve as the pit band in the scenes at Le Rhumba, it’s other moments that stand out – particularly his last at the dance class, where Berto sends a hopelessly diamond-addicted Garcia on her way into an alley where snow is gently falling.

And this in turn leads to the inevitable question: what is this all about anyway. Well surely it’s about death. And drugs. And style – in a way that hasn’t been seen on screen since the heyday of Sternberg and Dietrich. And it’s about Rivette doing a “complete 180” from the improvisatory extremes of Out 1: Noli me tangere (1971) and Céline et Julie vont en bateau/Phantom Ladies Over Paris (1974). But in the last analysis Duelle is about what all the greatest of the great are about – the siren call of cinema itself.