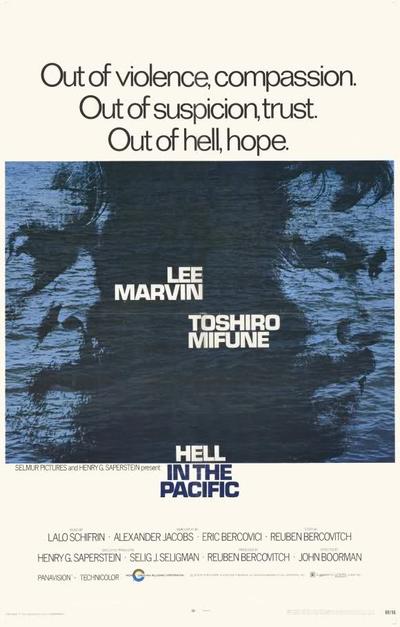 A shot-down American pilot finds his way to a small, unpopulated island where he hopes to find provisions. He soon discovers that he is not alone; there is a Japanese officer marooned on the island also. Will they continue to fight each other to the death, or will they reach a modus vivendi?

Lone Japanese soldier Toshiro Mifune diligently scans the ocean from his island lookout as he must have thousands of times before, but this time he spies an abandoned life raft resting on a rocky bluff. Within minutes he’s face to face with American sea-wreck survivor Lee Marvin and the two begin an elaborate game of cat and mouse. Director John Boorman presents this two-man war as a deadly game between a pair of overgrown children, who finally tire of it (as kids will) and settle into tolerated co-existence and then even something resembling a friendship. With impressionistic strokes, Boorman paints a lush tropical paradise in colors you can drink from the screen, capturing the texture of their experience as refracted through the cinema: the look of the island as seen through the haze of smoke, the sound of a sudden rainstorm as it hushes the island in a calming roar, the timelessness of life outside of civilization. The story seems almost secondary, an allegorical drama that comes alive in the excellent performances by Marvin and Mifune (who soon enough converse despite their complete inability to understand each other’s language) and the visceral immediacy of Boorman’s gorgeous widescreen images.