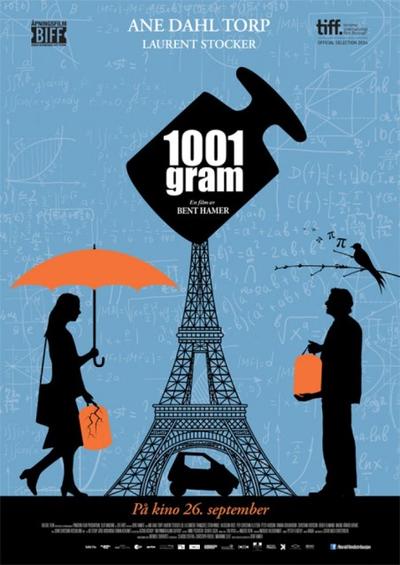 Quote:
When Norwegian scientist Marie attends a seminar in Paris on the actual weight of a kilo, it is her own measurement of disappointment, grief and, not least, love, that ends up on the scale. Finally Marie is forced to come to terms with how much a human life truly weighs and which measurements she intends to live by.

The international prototype kilogram of 1889, the mother of all kilos, is today kept in a vault at Bureau International des Poids et Mesures BIPM in Paris. It is the last physical weight reference still in use and the national prototypes must from time to time be transported from their respective countries to Paris in order to be recalibrated

No, it’s not about drugs; 1001 Grams refers to the weight of a kilogram plus a little something extra. Despite the weighty title, this is an extremely light, delicate art film that rarely makes a false move. For those who know Bent Hamer’s work, this Norwegian-Parisian love story between two scientists will come as another pleasant installment in his warm stories about human beings and their need for each other. For others the film may seem all too fly-weight and hard to get a handle on, making it not an easy choice outside of festival sophisticates. It is being proposed as Norway’s Academy Award hopeful.

With his prize-winning films beginning with 1995’s Eggs, Hamer has developed a loyal following who won’t be disappointed at the slightly off-kilter tale that toes a sweet line between irony and something straighter. Marie (Ane Dahl Torp) works at the Norwegian institute of weights and measures, where a prototype weight of the national kilo is kept locked in a vault. Treated with such enormous reverence that it can only seem absurd, this shiny platinum and iridium measure needs to be transported to Paris for an international conference, where it will be weighed to make sure it hasn’t gained or lost a microgram. Marie’s esteemed father, Ernst (Stein Winge), would normally be the one making the trip, but he is first ailing, then hospitalized. Before he dies, he muses to Marie, his only remaining family, on how much his ashes will weigh when he’s cremated. This metaphor of weighing one’s life and values hangs a little heavily over some of the dialogue.

Played with glassy precision by Torp, Marie is not a brittle woman, but she does have an overly rational approach to her life. She drives a tiny but practical electric car, which overturns at a certain crucial bend in the story, and watches dispassionately as her ex moves his furniture and other belongings out of her ultramodern house. When the task of transporting the national kilo to Paris falls on her shoulders, it becomes the occasion for a journey of self-discovery, a sort of quiet, Bent Hamer meltdown.
Closest to his 2003 film Kitchen Stories in which the Swedish Home Research Institute studies how to standardize household kitchens on a more efficient factory model, here the focus is once again on the gray area between science and human feelings. When Marie visits Paris, still processing her father’s death and her lover’s departure, she meets the warm, down-to-earth Pi (Laurent Stocker), whose quiet presence and offbeat interests help her to open up as a woman.

Everyone rows together on the technical side, from John Erik Kaada’s delightful score to cinematographer John Christian Rosenlund’s bright, clear images. The set design has a maniacal symmetry and precision until it reaches charming Paris, where the paint-chipped Eiffel Tower becomes an amusing plot point.