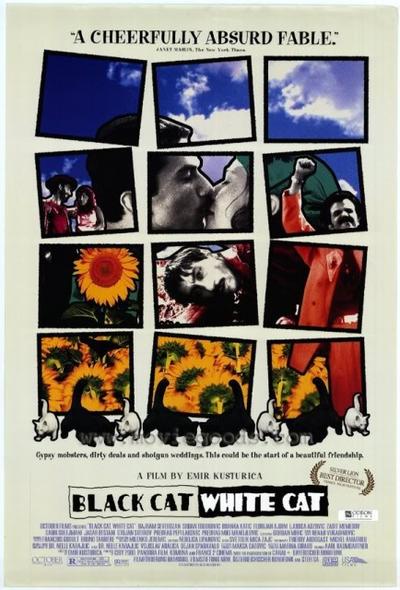 Bosnian-born filmmaker Emir Kusturica made this farce, set in a Gypsy settlement along the banks of the Danube, where three generations of characters burst forth in manic and frenetic displays of charm, confusion, and chaos.

Unfortunately, Afrodita and Zare have absolutely no interest in each other. Cute barmaid Ida (Branka Katic) and Zare fall in love and only have eyes for each other as plans get underway for the wedding of Zare and Afrodite. The sudden death of Zarije seems to offer a solution, since no gypsy would have a wedding and a funeral on the same day. However, Dadan delays the death announcement by hiding Zarije, packed in ice, in the attic. The wedding celebration gets underway amid numerous madcap mishaps and misadventures. 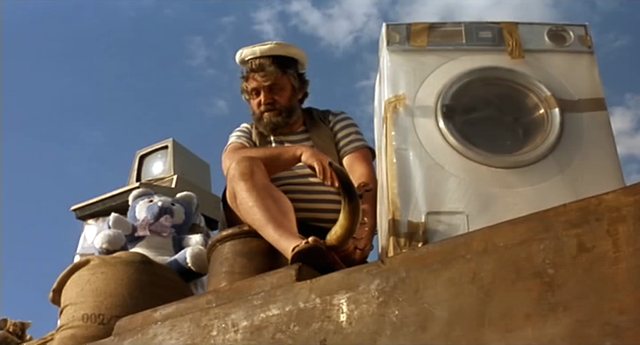 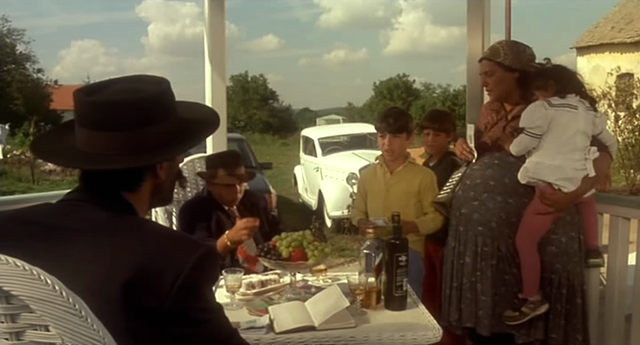 BLACK CAT, WHITE CAT is a movie in which no effort has been spared, a movie which makes other films seem as if they are merely going through the motions. It is a riotous, exuberant, irrepressible comedy from Emir Kusturica, who seems to treat every film as if it might be his last, and had better put everything he’s got into it. His previous work, UNDERGROUND, had the same energy and invention, but was concerned with the matter of Yugoslavia, and was therefore a tragedy. The joy of BLACK CAT, WHITE CAT is untrammelled by the hardships of geopolitical conflicts. It exists merely for the pleasure of being, and that is more than enough.

The gleefully convoluted plot, which I’m not sure I understood entirely, goes something like this: Matko (Bajram Severdzan), a man of gypsy descent living with his son Zare (Florijan Ajdini) by the side of the Danube, has a get-rich-quick scheme which depends on purchasing a train full of oil-drums and bringing it across the border to sell for major profit. To obtain the train, he calls in favours from rich obnoxious gangster Dadan (Srdan Todorovic) and his father’s old friend Grga (Sabri Sulejmani). But Dadan fleeces Matko and demands his money back. Matko can’t repay him because he invested everything he had in the train, but, according to his dead father’s wishes, Dadan also needs to marry off his sister (Salija Ibraimova)–who is called Afrodita but is variously described as a dwarf or gnome–and says that he will forget the debt if Zare marries Afrodita. Matko reluctantly agrees, even though his son is madly in love with the decidedly ungnomish Ida (Branka Katic). Meanwhile, Grga is urging his own grandson to get married, but the grandson is determined that he will only marry the woman of his heart’s desire. We can guess that all these hurtling narratives will collide before the movie is done, and they do.

Kusturica likes to hurl as much as he can into the frame and then simply move the camera about, allowing us to observe the chaos. The screen teems with life: a recurring band of gypsy musicians orchestrating scenes with their infectious upbeat playing; a gaggle of geese often found swirling about the feet of characters as they bustle about; a pig munching on the rusted frame of an old car; the black and white cats of the title. These anarchic presences crop up again and again, their vital chaotic antics paralleling and parodying the profuse comic antics of the people.

The whirligig motions of the plot somehow come to rest without flying off in all directions in the film’s centrepiece, a wild wedding which is a splendid illustration of Kusturica’s technique. Dadan dances about shooting a gun into the air, the absent-minded official gets the name of the bride wrong, a tearful Ida displays the wedding presents to the guests, Matko’s dead father lies under a block of melting ice in the attic, abd the coerced bride escapes by shuffling about the floor in an overturned box, slipping through a trapdoor, and escaping into a nearby forest where she hides in a tree-stump as the wedding party searches for her; Grga and his sons approach from the other direction, leading to a fateful encounter. The ever-present gypsy music pulses throughout, heartbeat of the film.

The movie as a whole approaches the same level of delirious unstoppable energy. What saves it from becoming overbearing is the rightness of the details. Kusturica enriches the film with generous human touches, like the delightful sequence in which Zare and Ida chase each other through a field of sunflowers, performing a gradual striptease as they go, radiant with young love; like the secret stash Zare’s grandfather has set aside because he knows Matko is too irresponsible to provide for his son; like the hideous teeth of the two patriarchs, Grga and Matko’s father, rotting and gold-capped, emblematic of human weakness and mortality. The “anything goes” sensibility of the film is somewhat deceiving: the madness is so entertaining only because it so carefully nuanced.

BLACK CAT, WHITE CAT is not a perfect film, but it never stays in one place long enough for us to dwell on its imperfections. Perhaps the abundance of motion and music and madcap plotting, the sheer relentlessness of the spectacle, could be said to disguise the thinness of characterization and the thematic incoherence. But who cares? The disguise, in this case, is all that matters. BLACK CAT, WHITE CAT is a celebration, a carnival, a parade of the grotesque and bawdy, and it is only as good as it is gaudy, colourful, lively. As far as those qualities are concerned, you couldn’t ask for more than this movie gives. 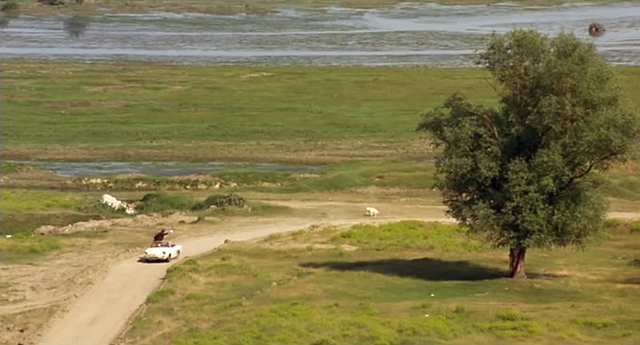 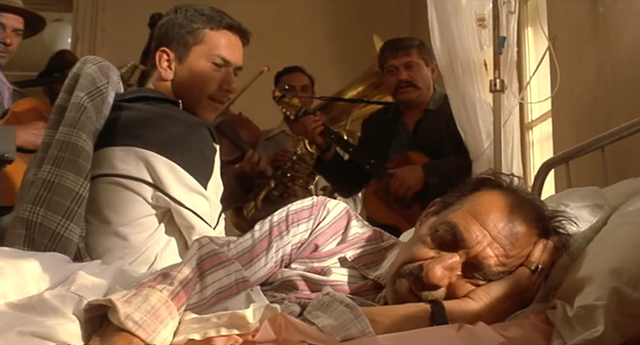 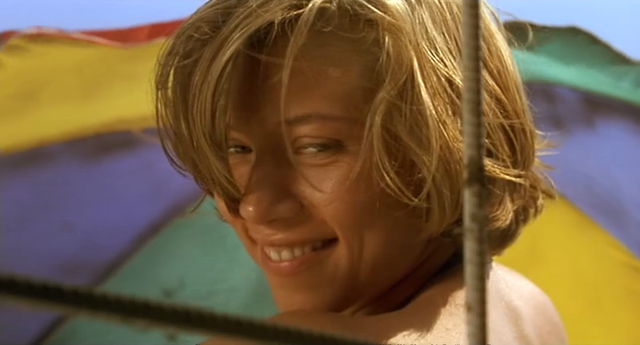