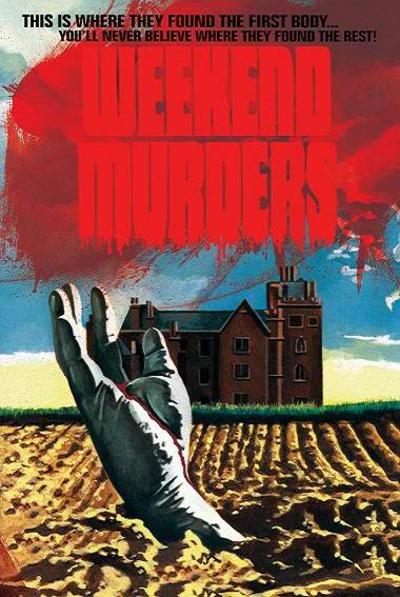 The atmosphere is ripe for murder at the estate of the recently dead Henry Carter. His heirs are a typically suspicious lot. There’s daughter Isabelle (Evelyn Stewart aka Ida Galli, CASE OF THE SCORPION’S TAIL) who abandoned her father and married beneath her station, her husband Anthony (Peter Baldwin, THE GHOST), her disapproving Aunt Gladys (Marisa Fabbri, FOUR FLIES ON GREY VELVET) and her prank-playing horny son Georgie (Chris Chittel, BEAST IN THE CELLAR), seemingly benevolent cousin Barbara (opera star Anna Moffo), pompous Uncle Lawrence (Quinto Parmeggiani, IDENTIKIT), and wastrel Ted (Giacomo Rossi-Stuart, THE NIGHT EVELYN CAME OUT OF THE GRAVE) who shocks his family with his surprise marriage to Pauline (Beryl Cunningham, SO SWEET SO PERVERSE). When the others are left out of the will and Barbara named the sole heir, Georgie voices what they are all thinking that if something were to happen to Barbara the inheritance would be divided among them. Soon the bodies start piling up and this time they really can’t say the butler (Ballard Berkeley, FAWLTY TOWERS) did it as he’s the first one to go.

Released in the US by MGM, THE WEEKEND MURDERS is not really a giallo in the filmic sense so much as a spoof of the Agatha Christie-type murder mysteries (Christie being one of the authors whose works was heavily represented in print gialli). The script is witty and diverting and will keep you guessing until the end. Although the tart dialogue is distributed among the cast members, Fabbri and Rossi-Stuart get the best lines (“Come on, Aunt Gladys, let’s go and strip the flesh off the carion together. We can tear each other to pieces later”). The masterful opening sequence features all the suspects on a golf course – along with the puzzling presence of a police constable (Gastone Moschin) and detective (Lance Percival) – and when a hand is discovered sticking out of a sand trap everyone is understandably sickened but not altogether surprised. Guglielmo Mancori’s Techniscope cinematography matches director Michele Lupo’s operatic sensibility and the English locations (and supporting cast) are quite a novelty for an Italian thriller.