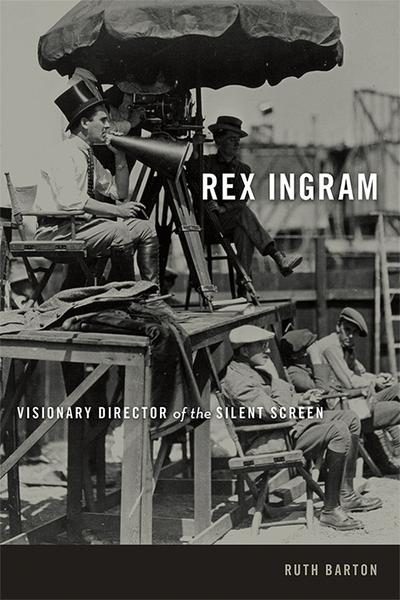 Noted for his charisma, talent, and striking good looks, director Rex Ingram (1893−1950) is ranked alongside D. W. Griffith, Marshall Neilan, and Erich von Stroheim as one of the greatest artists of the silent cinema. Ingram briefly studied sculpture at the Yale University School of Art after emigrating from Ireland to the United States in 1911; but he was soon seduced by the new medium of moving pictures and abandoned his studies for a series of jobs in the film industry. Over the next decade, he became one of the most popular directors in Hollywood, directing smash hits such as The Four Horsemen of the Apocalypse (1921), The Prisoner of Zenda (1922), and Scaramouche (1923).

In Rex Ingram, Ruth Barton explores the life and legacy of the pioneering filmmaker, following him from his childhood in Dublin to his life at the top of early Hollywood’s A-list and his eventual self-imposed exile on the French Riviera. Ingram excelled in bringing visions of adventure and fantasy to eager audiences, and his films made stars of actors like Rudolph Valentino, Ramón Novarro, and Alice Terry—his second wife and leading lady. With his name a virtual guarantee of box office success, Ingram’s career flourished in the 1920s despite the constraints of an increasingly regulated industry and the hostility of Louis B. Mayer, who regarded him as a dangerous maverick.

Barton examines the virtuoso director’s career and controversial personal life—including his conversion to Islam, the rumors surrounding his ambiguous sexuality, and the circumstances of his untimely death. This definitive biography not only restores the visionary filmmaker to the spotlight but also provides an absorbing look at the daring and exhilarating days of silent-era Hollywood.

Ruth Barton is lecturer in film studies at Trinity College Dublin. She is the author of Hedy Lamarr and has written several books on Irish cinema, including Irish National Cinema and Acting Irish in Hollywood.

Barton provides new insights into Ingram’s talent and his artistic shortcomings, his drive and his ambivalence, offering astute discussions of his important films and their critical reception. At the end, Ingram remains a fascinating figure because Barton does not try and resolve all of the director’s paradoxes. Instead, she lets Ingram’s life and work stand for themselves. Rex Ingram is a very significant work that keeps Ingram’s legacy alive and provides inspiration for new scholars of his work. — Thomas J. Slater, Professor of English (Film Studies), Indiana University of Pennsylvania

Barton has done a commendable job in unearthing information about one of Ireland’s lesser-known Hollywood greats. — The Sunday Times

Ruth Barton introduces us to the work of one of Hollywood’s greatest silent era directors, the Irish exile, Rex Ingram, and ponders why he was so forgotten. — Film Ireland

Ruth Barton’s welcome, expertly narrated biography lifts the veil on large portions of Ingram’s life. . . . There is so much in [this] book that is fascinating. — Scott Eyman — Wall Street Journal

Barton’s book details each of [his] productions with fine attention to both critical analysis and factual detail, building a thorough portrait of Ingram’s body of work in context. — Dublin Review of Books

But Ruth Barton’s Rex Ingram: Visionary Director of the Silent Screen is more level-headed than a Hollywood biopic. This is a scrupulous book: passionate about the work, dismissive of speculation. — Sight & Sound