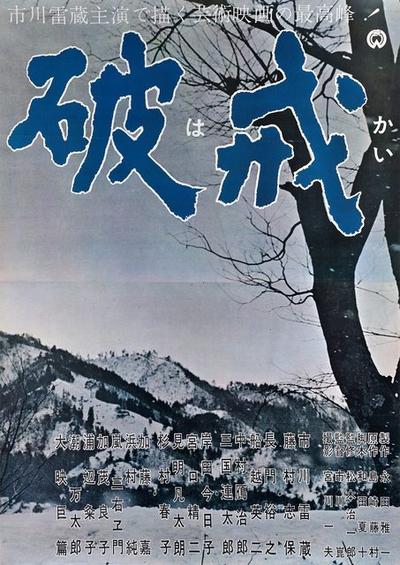 Keiko I. McDonald:
Kon Ichikawa’s Hakai (The Broken Commandment) began in 1961 as a televised dramatisation of Toson Shimazaki’s novel of the same title first published in 1906. Toson’s pioneering work of social realism created a sensationon television, so the director collaborated again with his wife and scenarist, Natto Wada on the film the following year. It, too, was a great success. The prestigious film journal Kinema Junpo ranked it as the fifth best film of 1962.
Set in 1903, during the late Meiji period, both novel and film depict a young teacher’s coming to terms with himself and society’s lingering feudal prejudice against his class of burakumin, then Japan’s minority group. But novel and film take strikingly different approaches to a topic still sensitive in the Japan of the 1960s.
Making the best use of “literary properties,” Toson took pains to explore the psychological dimensions of his hero’s struggle in great detail. Ichikawa, in contrast, relies on cinematic properties, especially visual legibility. Counting on the camera’s expressive power and temporal freedom Ichikawa dispenses withToson’s lengthy literary discourse. Instead, he lets us see and feel the suffering and pain of the outcast in a more direct way. In fact, one critic points out: “Generally, Ichikawa’s method is to accommodate the original source to his own taste and critique it through visual images. Accordingly, his film version of The Broken Commandment reflects this mode of representation and is highly acclaimed, as The Broken Commandment is in a sense Ichikawa’s own.

Yasuzō Masumura:
The main character in the original novel, Ushimatsu Segawa is a “New Commoner,” the popular name given in the late nineteenth century to those born in the hisabetsu buraku (settlements of outcasts under the previous Tokugawa administration). How could the director portray a “New Commoner” of the Meiji period in a cinematic way? Ichikawa focused on a black bull in the opening shot of the film. The animal is to be killed by the New Commoner, and stands frightened, on the point of running away. The terrified black bull, its eyes filled with tears, becomes an image of the sad figure of the New Commoner, then and now. Ichikawa represents the New Commoner through that image of a transfixed black bull.
In another scene from Hakai, a cow is slaughtered. A New Commoner strips the skin from the cow and butchers it. Ichikawa had an actual cow killed, cruelly detailing the process, not only to illustrate the fact that butchering cows was a New Commoner profession, but also to represent the cruelty of their existence without using a single line of dialogue. Through the butchering of one head of cattle. Ichikawa created a powerful portrait of the position that New Commoner Ushimatsu Segawa found himself in, of his psychology, and of the society that constrained him.
This is Ichikawa’s method of adapting literature to images. The assassination of Rentaro Inoko in Hakai is another example. The scene is set in northern Japan, in a small outpost blanketed in snow, without a soul in sight. Inoko is attacked by an assassin on the narrow road. Ichikawa pulls his camera back to an extreme long shot and intently observes their struggle. Eventually Inoko falls and the assassin flees, but the camera, without moving, continues to him the setting. During this entire scene there is absolutely no dialogue, but the composition overflows with the horror and sadness of the murder. The town covered in snow stands in for Meiji Japan, its wintry desolation telling us just what kind of society produced this killer. Here, too, we find a magnificently cinematic rendering ot a literary masterpiece.

both passages taken from “Kon Ichikawa” edited by James Quandt