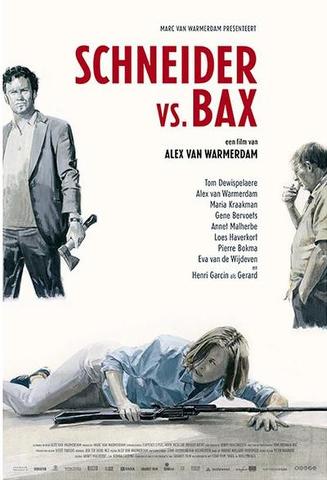 Quote:
A relatively straightforward genre exercise compared with last year’s Cannes-competing “Borgman,” “Schneider vs. Bax” (which has already opened in its native Netherlands, where it did arthouse business rather than action-movie numbers) likely wouldn’t have interested festivals or foreign distribs if not for the career-rekindling acclaim his previous feature attracted. Van Warmerdam would be the first to admit this follow-up was designed to be as different from “Borgman” as possible. Still, there’s so escaping the macabre and borderline-surreal sensibility that underlies them both, which should earn this pic playdates around the world in venues that would have ignored him a year earlier.

Beginning its international travels in Locarno, “Schneider vs. Bax” will almost certainly be the most accessible film in competition at the experimental-minded Swiss film fest. Indeed, apart from its language (Dutch), the movie wouldn’t be out of place in an American megaplex: No sooner is Schneider awakened by his adoring wife (Loes Haverkort) and daughters than he receives a call from his boss, Mertens (Gene Bervoets), ordering him to grab his rifle and get to work. The job “can only be done today,” Mertens insists, adding, “Ramon Bax is a child killer” to convey the necessary urgency.

That scene alone places van Warmerdam’s wicked little outing squarely within the category of hitman movies: a semi-fantastic subgenre, from “Grosse Point Blank” to “In Bruges,” that entertains the notion that it’s possible for well-adjusted modern men to ease back and forth between domestic life and freelance work as contract killers. Schneider seems to have figured out the balance, maintaining a plausible handyman cover story so that his wife and kids don’t suspect a thing.

By contrast with Schneider’s neatly ordered life, Bax is a mess. (And what does it say that van Warmerdam casts himself in the role?) Shacked up in a wooden lake house, he mixes booze and drugs, barely remembering to kick out his much-younger mistress (Eva van de Wijdeven) in time for a visit from his adult daughter, Francisca (Maria Kraakman), who’s not in such good shape herself, mentally speaking. Meanwhile, Bax has totally forgotten that today’s the day he was supposed to kill Schneider, though he has a slight advantage in that his adversary plays by certain rules and won’t strike until Francisca clears out. This being a comedy, expect more eccentric guests to interfere before the day is out, as the film veers ever-farther away from the realm of realism.

Of course, the more absurd the circumstances, the more entertaining the movie gets. From the outset, the tone is defined by the location van Warmerdam selected, placing Bax’s cottage along a marshy lake surrounded by wild reeds — a unique spot he found tucked away within a nature preserve in northern Holland. This peculiar setting gives the creepy impression of being caught in the open, a la Cary Grant’s unnerving run-in with the crop-duster in “North by Northwest,” while eliciting childhood memories of playing hide-and-seek among cornfields or tall grass.

When a nosy game warden interrupts Schneider scoping out his quarry early on, the assassin cleverly pretends to a bird-watching enthusiast. With his cover blown, however, he must drive home and pick out a new disguise, resulting in a run-in with a sleazy pimp (Pierre Bokma) and his middle-aged prostitute, Gina (Annet Malherbe). Thinking back to first impressions, it was Schneider who seemed to be the sympathetic one at the outset (Dewispelaere has an affable Tim Robbins-like quality), whereas Bax’s surly behavior half-convinced us he had it coming. But as the film unfolds, we see that Bax isn’t such a bad dad after all, acting with Francisca’s best interests at heart, at least when it counts.

And so, as the inevitable showdown between Schneider and Bax approaches, we find our allegiances changing, praying that, if nothing else, Gina and Frascisca make it out alive in that primitive way we root for the dog to survive a Hollywood disaster movie — which is to say, van Warmerdam finds himself toying with archetypes here, rather than proper well-rounded characters. A certain type of chivalry kicks in on the audience’s side, while the screenplay seems to change the rules at it goes. The instant Francisca picks up her father’s rifle, for instance, all bets are off. And as Gina begs Schneider: “You could also not do it. You’re not an ape, are you?”

These are clues that the film has a conscience, although it would be unwise for audiences to second-guess where van Warmerdam is headed. On one hand, he’s an incredibly technical director, capable of juggling complex and seemingly contradictory tones, while also orchestrating tension in such an unusual environment as this lakeside setting. But he also makes counterintuitive choices, including the one to tell this story in full sun. Both killers live in bright white houses and wear light-colored clothes. The sun beams down on them, desaturating incidents that another director might choose to hide in murky shadow. As in Arthur Penn’s great, ironically titled “Night Moves,” the greatest evil unfolds in plain view — only here, such wickedness doesn’t boast existential implications (the way “Borgman” played things), but is content to settle for a laugh.