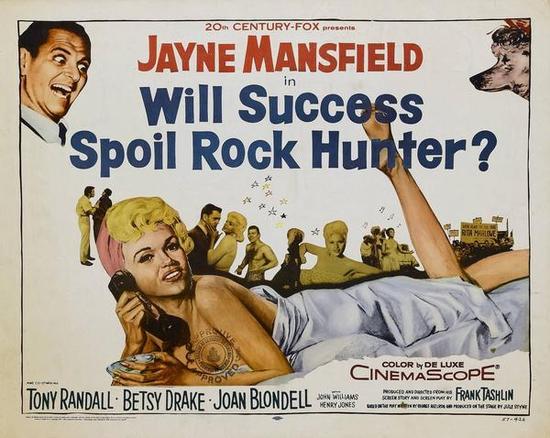 It was produced and directed by Frank Tashlin, who also wrote the largely original screenplay, utilizing little more than the title and the character of Rita Marlowe from the successful Broadway play Will Success Spoil Rock Hunter? by George Axelrod. The play had run from 1955 to 1956 and also starred Mansfield as Rita.

Will Success Spoil Rock Hunter? received a nomination for a Golden Globe for Best Motion Picture Actor – Musical/Comedy (Tony Randall) and a nomination for the Writers Guild of America, East WGA Award (Screen) for Best Written American Comedy (Frank Tashlin). The character, Rita Marlowe, is based on dumb blond stereotype epitomized in the ’50s by Marilyn Monroe.

In 2000, the film was selected for preservation in the United States National Film Registry by the Library of Congress as being “culturally, historically, or aesthetically significant”.

The film contains joking references to several of Mansfield’s other roles, including The Girl Can’t Help It (1956; also directed by Tashlin), Kiss Them for Me (1957), and The Wayward Bus (1957). The book Mansfield reads in the bathtub scene is Peyton Place (1956) by Grace Metalious, which eventually became a feature film and a popular TV series that is claimed to be the forerunner of prime time soap operas. It has been claimed that the buxom characters in the book were inspired by Mansfield.