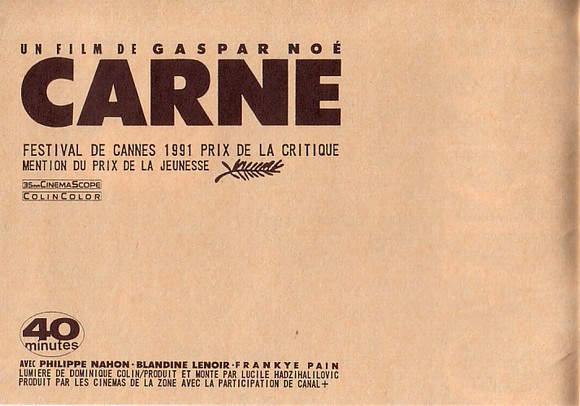 Quote
“Starring Philippe Nahon and Blandine Lenoir, it tells the story of a horse butcher with an autistic daughter. At a running time of 40 minutes, it was the first longer film directed by Noé. The narrative was continued in his 1998 full-length debut, I Stand Alone. Carne marks not only the first time Noé incorporated on-screen textual warnings, epigrams, and notes into the filmic narrative, but also the first collaboration with actor Philippe Nahon who appeared in the whole trilogy. Carne also includes a number of ‘shock’ elements such as gunshot sound effects, loud martial chords on the soundtrack, and rapid editing that would become major characteristics of his style in his later films. Between the shocks and warnings in the film, however, there are veins of delicious dark humour to be found: a montage showing the butcher chopping meat as intertitles mark the passage of year after year, and the mute daughter blankly watching Blood Feast (1963) on television.”