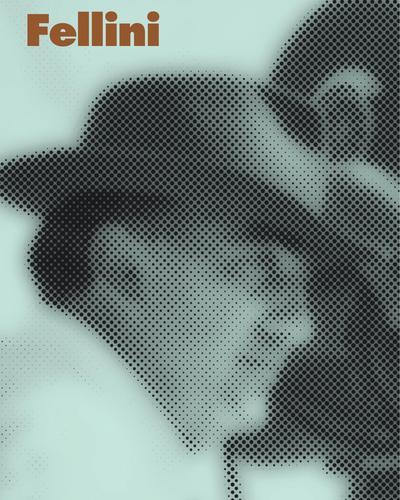 The career of Federico Fellini lasted for forty years and made him perhaps the most illustrious of all the filmmakers to have come out of Italy. Those forty years saw the appearance of titles that have carved out a permanent niche in the memory of generations of film lovers. Fellini, a richly illustrated book written and edited by Sam Stourdzé, Director of the Musée de l’Elysée in Lausanne (Switzerland), taps into the sources of his fertile imagination and brings the vital power of his work into the limelight providing insight into the obsessions and motivations of the man behind La Strada, La Dolce Vita and 8¿.

This book and the exhibition aim to reveal the universe of the filmmaker and the sources of his rich imagination, and to highlight the essential power of his work. The story of Fellini’s themes and obsessions is, twenty years after his death, told by movie stills, set photos and his drawings, as well as by archive material and posters.

The fantasy world of Cinecittà, the studio where Fellini made so many of his films, is revealed through previously unseen behind-the-scenes pictures that were taken by photographers such as Gideon Bachmann, Deborah Beer, Pierluigi Praturlon and Paul Ronald.

The publication includes four main chapters. Popular Culture concentrates on Fellini’s many sources of inspiration within the day-to-day popular culture of the time. This includes not only the steadily more prevalent mass media, but also such manifestations as the circus, rock music, cartoons and Catholic or political parades. Fellini at Work shows us the director on the film set, instructing his actors, working together with costume designers, behind the camera, and so on. The City of Women concerns Fellini’s most important subject and obsession: Woman, in all her many guises. Finally, Biographical Imagination presents Fellini in the guise of various doppelgangers, each reflecting a different aspect of his personality. Particular attention is given to his ‘Book of Dreams’ in which he recorded his dreams in words and drawings.