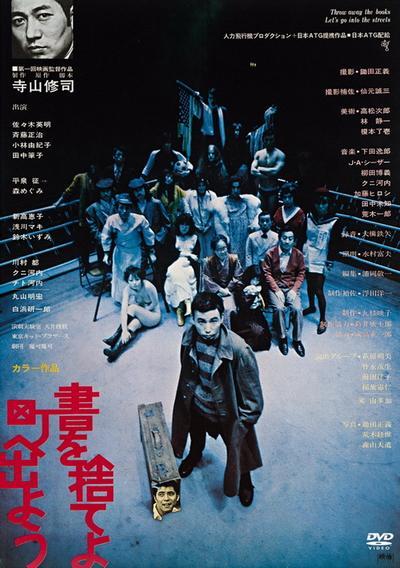 “Throw away your books, Go out into the streets!” is Terayama’s adaptation of Terayma’s eponymous book and play. This actually is his first full-length film as a director after shooting a few shorts experimental footage, and writing scenarios for other directors as Hani Susumu (Nanami Inferno of first love 1968) or Shinoda Masahiro (Buraikan 1970). Basically the story is about a teen in Japan, who plays soccer and deals with his highly dysfunctional family. His grandma is senile, his sister loves her pet rabbit to the point of sexual obsession, and his father gets him a prostitute so he can be more of a man. Out of rage our protagonist runs away and hits the street. But the main story is broken up by random short narratives of various Japanese strangers, punk like sing along and psychedelic surreal imagery. 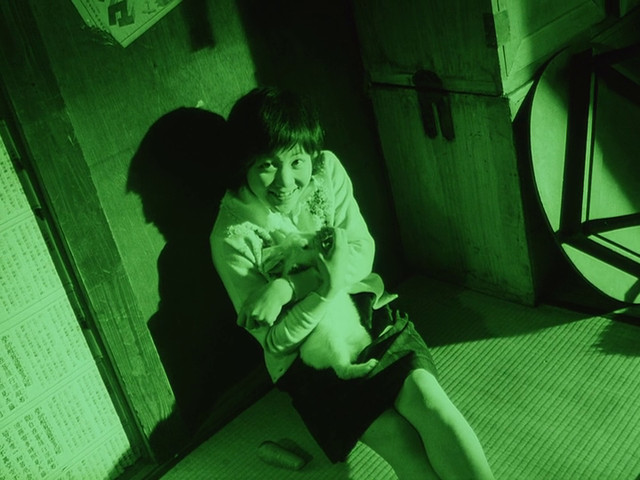 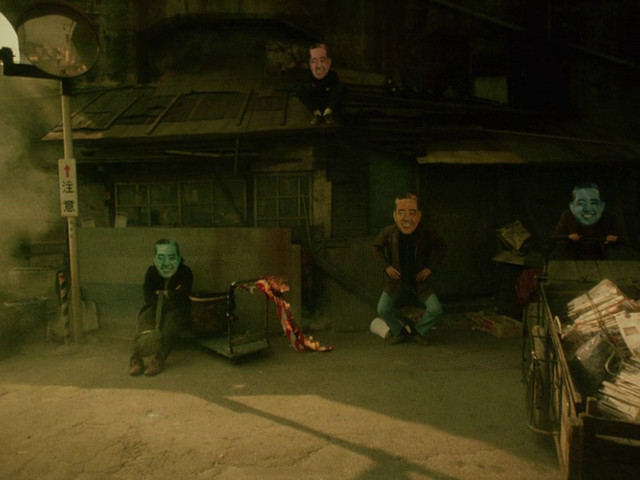 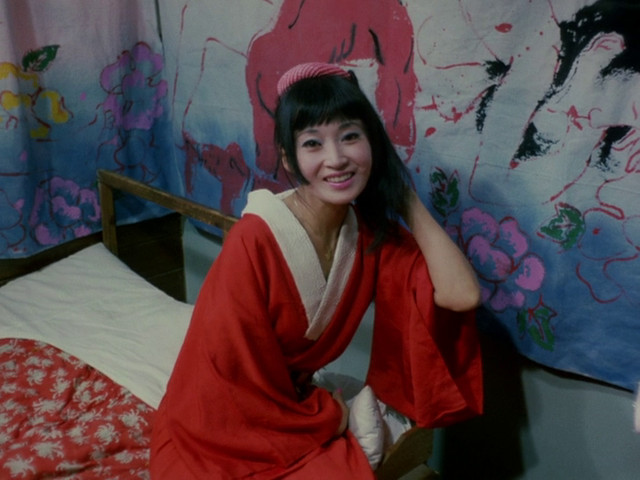 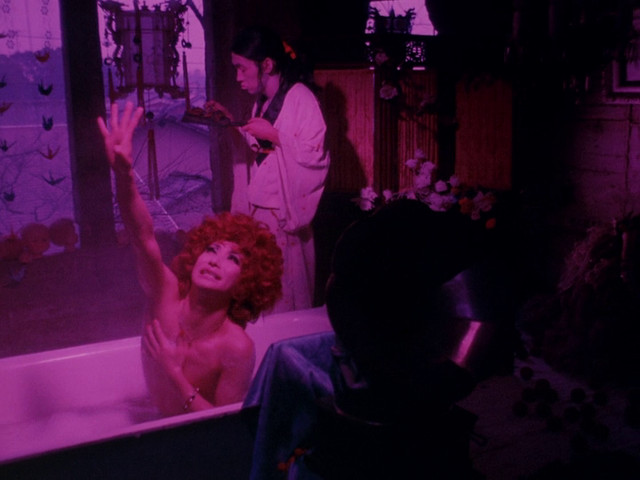 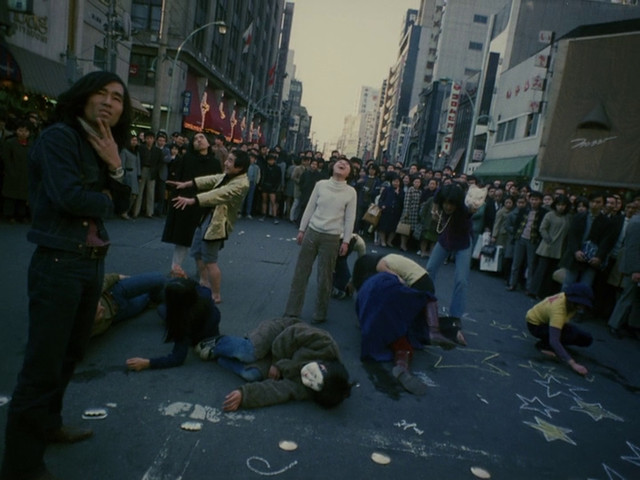 Quote:
Throw Away Your Books, Let’s Go Out Into the Streets is unquestionably a product of the late Sixties and early Seventies, when rebellion ruled the artistic roost and everything from “anti-theater” to “un-universities” were in vogue. In the same way, Books is something like “anti-cinema”: it’s unburdened by anything like a linear plot or conventional storytelling, has no real beginning or end (or even a middle, really), and floats freely from one loony scene to the next. Despite all this, it’s not the unwatchable disaster it could very easily have been; it’s actually quite charming in its ragged insistence on being its own self.

Books was written and directed by Shuji Terayama, known widely in Japan as a filmmaker, poet and screenwriter. Among his scripts were My Face Red in the Sunset and Tears on the Lion’s Mane, two of Masahiro Shinoda’s better movies. He was also one of the co-founders of the avant-garde Art Theatre Guild, which was responsible for some of Japan’s most interesting and confrontational movies through the Seventies and Eighties. Books was produced as an ATG project, along with Terayama’s outlandish and controversial first film Emperor Tomato Ketchup. While it isn’t as flat-out unreal (and frankly indigestible) as Ketchup, it’s no less bizarre—but endearingly so.

The title alone should be a hint that we’re being asked to do away with our critical and intellectual faculties and simply experience the moment. Right from the start Terayama is out to chastise us, or at least make us aware, of what reducing all of this around us to a mere movie will do to us. He opens on a black screen, held for an uncomfortable length of time (is something wrong with the film?). Then the movie’s young narrator appears, chiding us for only being an audience, for being hidebound by being on that side of the screen while he’s free.

The boy (Terayama calls him “Watashi”, or “Me”, in one of the least ambiguous hints about the movie’s real meaning) shows us his life in a series of bizarre vignettes, none with any particular plot driving them. His sister has a bizarre obsession with rabbits (one of the few elements in the movie that comes closest to being a plot); his grandmother, a kleptomaniac; his father, a criminal and a liar. He daydreams of taking flight in a glider, much like the one a young Korean man he’d read about was flying—until he nosedived and crashed. He can escape and die, or merely endure with no end in sight.

The kid’s biggest problem is his twisted preoccupation with sex, and that’s writ large as social commentary given how there isn’t a single honest sexual relationship in the entire movie. His first sexual encounter is with a prostitute who not only serviced the rest of his soccer team but is cheerfully proud of being able to make so many men happy. Knowing now this means he can’t ever really have her for himself, he lets her service him, too, but breaks down crying in the process. Later, his sister is raped by his soccer buddies, who seem to do it at least in part as a form of mocking him for his own weaknesses.

Terayama stitches all of these things together with random interludes—musical numbers, surrealistic montages, clips of this and that from the boy’s life. The music in particular is gleefully sarcastic and wonderfully pointed, serving as a Greek chorus to the goings-on (in much the same way a great rock music score was used as counterpoint in the enormously underrated O Lucky Man!). I was surprised to learn that composer J. A. Seazer also did scores for many of Terayama’s other movies, and would later go on to contribute an equally surreal and bizarre song score for the animated series Revolutionary Girl Utena. Here, he uses pop protest tunes, nursery rhymes, and many other musical conventions to form a weird but undeniable whole. (The soundtrack album is available on CD in Japan, and Seazer himself apparently has a bit of a cult following.)

Even after almost 30 years, Terayama’s criticisms of Japan still have bite. The country has no end of material wealth, but its citizens are impoverished in more than one sense—especially sexually, where prostitution, rape and fantasized perversions are the norm and male-female relations are essentially a cipher. Manhood is hypermasculinity (at one point Terayama’s fantasy figures croon out a sarcastic ode to macho yakuza movie hero Ken Takakura); womanhood is an essentially unpreservable purity. Childhood means being protected from the adult world for too long and then unceremoniously being dumped into it. Adulthood, as exemplified through his weak and corrupt father, means being a coward at best and a criminal at worst. Escape through fantasy is temporary at best, and in the end you always come crashing down to earth.

Terayama doesn’t have any answers, and he doesn’t even have an ending: he simply gathers his narrator and cast together for a formal farewell, and—as in the beginning—makes us wait. And wait. And wait. In the end, as Thomas Weisser wrote in his review of the movie in his Japanese Cinema: Essential Handbook, the message is clear: Don’t watch this. Experience life for yourself. The storytelling (such as it is, in a movie where there’s little story) in Throw Away Your Books is more interesting than the supposed truths being unearthed, but perhaps that is entirely part of the idea.