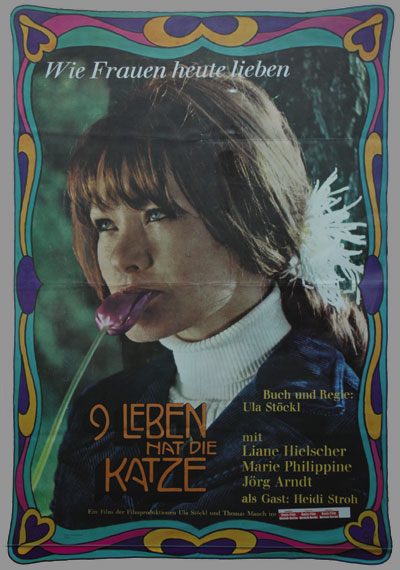 Here’s one of the quintessential films (according to film historians and secondary literature, that is) of the “New German cinema”, the feature debut of Ula Stöckl which is considered one of the first “true” feminist films of German cinema.

In 1968’s Germany, even when there is no women’s movement or women’s cinema, Ula Stöckl shoots the movie The Cat has nine lives. The film disappeared without trace after the distributor, which had bought it and secured 600 cinema dates for it, went bust. It wasn’t until many years later that it was re-discovered as West Germany’s “first feminist film” (Christa Merker) and it became a cult film of the 60s. In a relaxed, flirtatious and meandering manner it portrays the everyday experiences, desires, sexual acts and fantasies of different women: a German journalist, her French girlfriend and a German pop singer. Stöckl shocks both men and women with her use of cinematic metaphors for female lust. These elements of shock run through all her work. Other cinematic trademarks in this, her first film, also guide her later film work: such as the use of amateur and professional actors, or the bringing together of fantasy and dream sequences with raw elements of footage of real-life situations. The film- maker argues: “… I chose the characters as types: the not-yet-married professional woman, the recent divorcee confused about her future, the career woman, the deceived wife and the ultimate dream woman — a legendary Circe. In this film the women seem to be sleeping because each thinks only of herself and that she has an advantage over the other. Each one thinks she has a recipe for happiness, or that being unhappy is her own fault because she’s too dumb to be happy. In other words, these women cannot see their anxieties as having something to do with the society in which they live…”

“What women should want”
A portrait of Ula Stoeckl

She has made more than twenty films when you add them all up, and one of them (Stories of a Dumpsterkid) consists of 25 episodes of varying lengths. Twenty films, and each of them – like an act of rebellion – wrung from the apparent impossibility of the material ever becoming a film. Like Alexander Kluge and Edgar Reitz, Ula Stoeckl belongs to the bedrock of ”New German Film“, where she represents the female, the maternal line. When she presented her first feature film in 1968, a film people later recognized as ”the first feminist film“, she was almost a decade ahead of feminism and thus of the times themselves. There was no need for direct talk of politics in The Cat Has Nine Lives, for it was an eminently political film in which five women search for success and happiness, as if the need for this had been laid down by the constitution. ”I think,“ she says about it, ”that for the first time I broke through something that countered men’s ways of looking at things, although at that time I was influenced by the male perspective myself, and even reproduced it.“

Because she understood how to stand up to the male viewpoint, this ”feminist before feminism“ initially earned the mistrust of politically committed women, but later enjoyed a fame that extends far beyond Germany. So it was not by chance that she – who found recognition abroad, particularly in France and the USA, earlier than in her home country – was a highly appreciated adviser of the first Festival International des Films de Femmes at Sceaux (Paris). Her films had been shown and had won awards at more than seventy festivals all over the world. In 1984 she also received the German Film Award and the German Film Critic’s Award for The Sleep of Reason. But surely the finest award, the greatest honor she has received is the Konrad-Wolf Award from the Academy of the Arts in Berlin.

The Cat Has Nine Lives was a necessary title for this strangely composed, exuberantly developing film with its waves of association, fantasy and metaphor telling the stories of beautiful women. Immediately, it became Ula Stoeckl’s signature – as she herself needed nine lives and more in order to survive the bankruptcy of the film’s distributor just two months before the film was due to be released. As to why and how she carried on, she says ”You shouldn’t stop believing in what you want to do. Everything is subject to change, and I rely firmly on that, again and again.“

Stoeckl is brave and has an almost incredible vitality, so she has never really let anyone bring her down. There were innumerable projects that came to nothing because no one listened to her suggestions about how to finance them. But then, despite the circumstances, she did make A More Than Perfect Couple, a satire on melodrama and the beautiful lie of sexual equality, and Erika’s Passions (Erikas Leidenschaften, 1976) about the foolish hope that women could get on better with other women than with men. For Stoeckl does not let her female view, the female view, make her blind to insight. She is on the women’s side, because she is a woman, and because everything that she does comes from her utterly personal consciousness, from – and in her case this is no contradiction – her intellectual feeling or emotional intelligence.

”After thousands of years of patriarchy,“ she knows, ”women first have to learn that they can want something, for themselves, independent of men.“ That is also the theme of The Sleep of Reason, her perhaps most fascinating film, made entirely in the spirit of the Goya title with its ambiguity. A female Italian doctor – named Dea (and thus, of course, Medea) – is married to a German pharmaceutical chemist and dreams of liberation by giving birth, during ”the sleep of reason“, to the monstrous: to the murder of the unfaithful Jason and her wayward daughters, of her rival, of the mother who fails to understand her and finally of killing herself. Feminism, or so one could read the film, has not solved the problem of the incompatibility of the sexes, generations and cultures. However, it has pulled back the covers to reveal this problem, defining it more clearly. That is not the least contribution made by Ula Stoeckl, and it is one that extends far beyond the world of cinema.

Peter W. Jansen (one of Germany’s most renowned film historians and film critics) spoke to Ula Stoeckl
– From german-films.de (link)