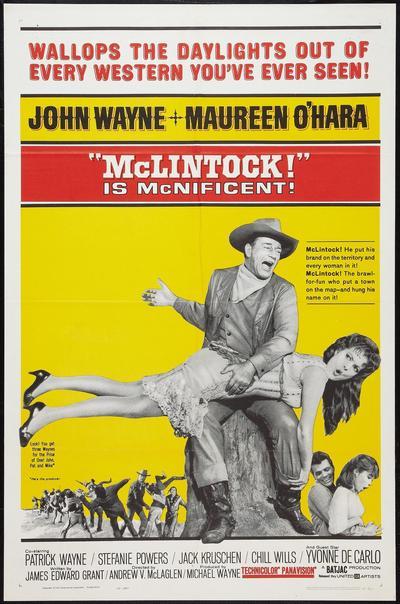 Plot:
John Wayne’s most popular film of the 60s is a broad, boisterous comedy-western loosely based on William Shakespeare’s The Taming of the Shrew. Wayne in his two-fisted best stars as a George Washington Mclintock, a middle-aged cattle baron (John Wayne) who has his hands full with his estranged wife (Maureen O’Hara) – she walked out on him 2 years ago without a word and has returned to get a divorce in order to move back to the east with their daughter,Becky (Stefanie Powers). Verbal fireworks explode, slapstick pratfalls bloom, and the Wayne-O’Hara “reconciliation” culminates with the biggest mud-hole brawl this side of the Mississippi. Patrick Wayne, Yvonne De Carlo, Chill Wills, Strother Martin and Jerry Van Dyke are among the dazzling supporting cast in this wild, raucous and hilarious western. Directed by Andrew V. McLaglen (Cahill U.S. Marshall).