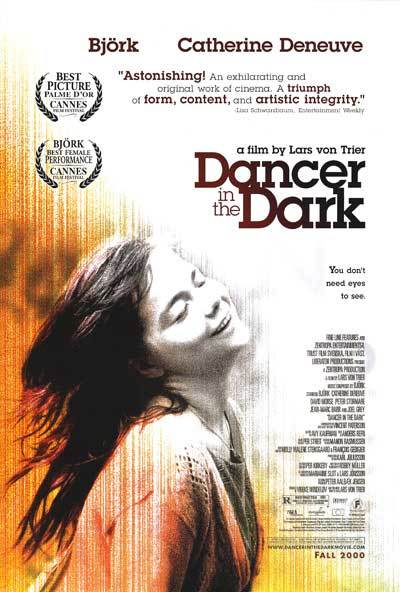 SYNOPSIS:
Selma is a Czechoslovakian immigrant, a single mother working in a factory in rural America. Her salvation is
her passion for music, specifically, the all-singing, all-dancing numbers found in classic Hollywood musicals.
Selma harbors a sad secret: she is losing her eyesight and her son Gene stands to suffer the same fate if she
can’t put away enough money to secure him an operation. When a desperate neighbor falsely accuses Selma
of stealing his savings, the drama of her life escalates to a tragic finale.

Nominated for 1 Oscar. Another 28 wins & 34 nominations

Quote:
If nothing else, Mr. von Trier is a brilliant engineer of dread; Selma’s every moment seems to contain the possibility of suffering, humiliation or betrayal. She wears her guileless, faltering vulnerability like a target on her back, and the movie follows her through the stations of her martyrdom like a medieval pageant.

And once again Mr. von Trier’s methods elicit a performance from his lead actress that deserves to be called miraculous. Like Emily Watson in “Breaking the Waves,” Bjork, in her movie debut, seems to be inventing a new style of film acting, if not an entirely new kind of human being. Her eyes are obscured behind thick glasses and the high cliffs of her cheekbones, but Selma’s capacity for feeling – for joy as well as agony and terror – overwhelms her mousiness.

When she hears a song she likes, her tongue darts out between her teeth, and her anxiety registers in her hands and in the tendons of her neck.

Like Ms. Watson’s Bess McNeal in “Breaking the Waves,” Selma is sacrificed on the altar of intellectual bad faith. The earlier film was about the collision between repressive religious orthodoxy and pagan sexual spiritualism, and this one posits an equally schematic conflict between the liberating power of pure imagination and the intractable authority of the market and the state.

It may be, though, that the real struggle we’re witnessing on screen is between Bjork and Mr. von Trier, between artistic conviction and aestheticized cynicism. It’s hard to say who wins, and impossible to avert our eyes. “Dancer in the Dark” is one of the most sadistic films I’ve ever seen, but it also raises the possibility that sadism might be, in spite of itself, a species of love.