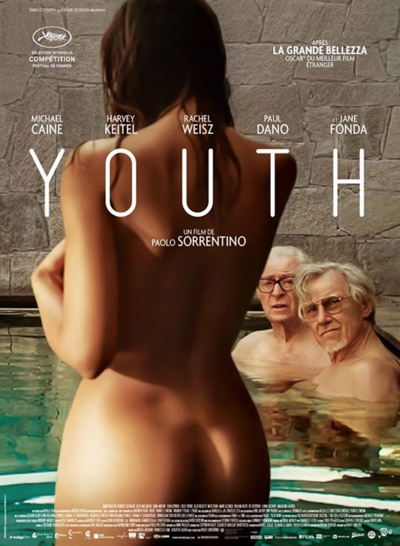 Paolo Sorrentino’s new movie set in a Swiss sanatorium is a diverting, minor work, tweaked up with funny ideas and images and visually as stylish as ever. There are brilliant flourishes here that could only have come from Sorrentino: superb swooping camera moves, grotesque faces and angular perspectives, and it always watchable. But it’s beset with Sorrentino’s occasional fanboy weakness for pop-star cameos — Paloma Faith appears here, playing herself and not earning her keep.Youth has a wan eloquence and elegance, though freighted with sentimentality and a strangely unearned and uninteresting macho-geriatric regret for lost time, lost film projects, lost love and all those beautiful women that you never got to sleep with. The title has literary resonances with Conrad and Tolstoy, but the youth evoked is mostly that of young women and young women’s bodies, whose allure never fades for men as they get older.

It is all incarnated in Michael Caine, whose face here is an inscrutable mask of worldly disillusion, breaking occasionally into a droll smile: he plays retired British composer Fred Ballinger, currently fending off requests from the Palace to conduct a special Royal Command performance of his early masterpiece Simple Songs. (Fred is supposed to have been an intimate of Stravinsky’s — but this music sounds more like Britten pastiche.) He is undergoing a health check-up at this luxurious state-of-the-art sanatorium, although as he says: “At my age, getting in shape is a waste of time.”

Fred is there with his best buddy Mick (Harvey Keitel) an ageing movie director, here with his production team, brainstorming a new film set to star his old diva friend, played by Jane Fonda. Mick’s son is married to Fred’s daughter and assistant Leda (Rachel Weisz) who actually shares her dad’s bedroom. There is also an LA movie actor Boyle (Paul Dano), another sufferer from that popular condition: self-congratulatory cynicism, who is preparing for a certain historical role, and astonishes everyone at the spa by appearing one morning in full costume and makeup. The two old guys, Mick and Fred, go into a kind of arthouse version of Statler and Waldorf, and they stroll around the grounds, grumping away, torturing themselves by whingeing about their prostate worries and perving over the current Miss Universe (Madalina Diana Ghenea) who has won a stay here as part of her prize and turns out to be smarter than anyone thought.

There has already been much comment online to the effect that Caine is playing the kind of role that might otherwise have gone to Sorrentino’s longtime collaborator Toni Servillo, and it’s true that Caine’s air of sticken ennui does remind you of Servillo. But actually Caine is very good in the role, he brings something different, a distant fatherly charm.

If only the film was not so (mostly) marooned in that single location. When the action cuts to memories and fantasies of Venice, where Fred conducted an orchestra, the film suddenly comes alive with power and movement: there is a stunning tableau of St Mark’s Square underwater. Even a very quick scene with Jane Fonda losing her temper on a plane frees things up a bit: but mostly we are drifting around the handsome facilities and grounds of this sumptuous but weirdly soulless open prison with its massages and its heated pools.

There is a poetic richness in Youth which occasionally emerges as Mick and Fred talk about what they can remember of their lives, and Mick’s realisation that there are huge stretches of his own life that he can simply no longer remember: his own youth is more or less a complete blank. It is an idea which is more terrifying than piquant: more disturbing, arguably, than anything Mastroianni’s director faced in 8 ½ — though he himself had youth more or less on his side.

Sorrentino has a basic level of fluency and verve. Anything that this film-maker places in front of his camera is always arresting to some extent: there is a superb shot in which Fred and Mick spy on an elderly couple having sex in a forest: a shot replete with comedy, absurdity and alienation. I am already looking forward to another more substantial Sorrentino film, though there is pathos here, and sweetness.