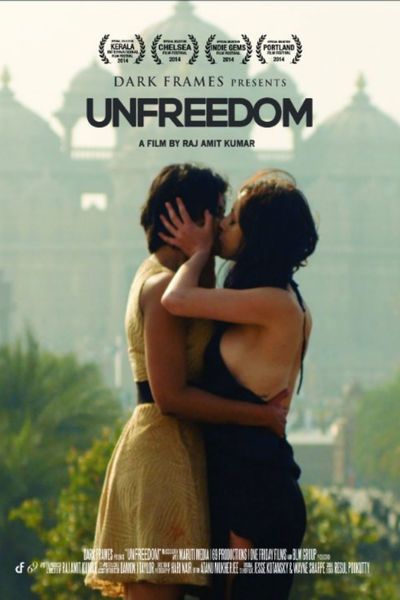 The movie that is BANNED in India.
Quote:
When a film is “banned” by the Censor Board of Film Certification, you know you are onto something. Well, that is exactly the case with Raj Amit Kumar’s film Unfreedom.

Thinking outside of convention.

Unfreedom breaks all the “rules”.

The film follows two different lives, the storyline pivoting on a female same-sex relationship and the dangers of religious extremism.

Shifting between New York and Delhi, one story explores the kidnapping of a liberal Muslim scholar by a Muslim terrorist. The other story dives into a woman’s journey -a woman secretly in love with another woman. She faces the challenges of this love when she refuses an arranged marriage set up by her religious father.

Classified as “too controversial” for release in India, the film was released in North American theatres on the 29th of May 2015 and simultaneously on digital channels via Film Buff.

Plot:
Set in two different cities, New York and New Delhi, the film approaches sexuality and violence head on with a focus on the Muslim and LGBT identities.

In New York arrives a fundamentalist Muslim Mohammed Husain, imprisoned by his brutal past, on a mission to kidnap and kill a peaceful Muslim scholar, Fareed Rahmani. “The choices we make, when we are most cornered in life, define who we are.” Once they come face to face, the only way out is through a true examination of the bare bones of each one’s existence to make a choice.

In New Delhi, Leela Singh, a closeted homosexual girl leaves her orthodox cop father’s home with a mission to kidnap her activist bisexual lover, Sakhi Taylor, and marry her. Not only do the lovers need to come to terms with their own differences, they need to face Devraj, the truth of the society they live in.

Set in the most archetypal cities of economic and patriarchal control, four characters come face to face with gruesome acts of violence in a battle of identities against unfreedom. “Unfreedom” examines the struggle between the powerful and powerless and those who strive to stand against dominating torturing socio political injustices.

Production:
Hari Nair is the cinematographer of the film with Wayne Sharpe and Jesse Kotansky composing the soundtrack. Resul Pookutty did the sound design.

In India, the Central Board of Film Certification refused to certify the movie for public release in India.

Censorship:
In India, the film was refused certification by the Examining Committee. A revising committee of the Censor Board proposed cuts to the director, Raj Amit Kumar. He refused and appealed against the Censor Board’s demand for cuts to the Indian Government’s Information and Broadcasting Appellate Tribunal FCAT. In response to his appeal, the authorities completely banned the film regardless of cuts. The news of the ban gained widespread coverage in the media.

In a video released on April 9, 2015 on YouTube, Raj Amit Kumar states that the Censor Board should rate or certify a movie, instead of banning and offering cuts. He also said that he would keep sending signed petitions to the Prime Minister and Censor Board, until there is a real change. The director is seeking support from people who believe in freedom of speech.