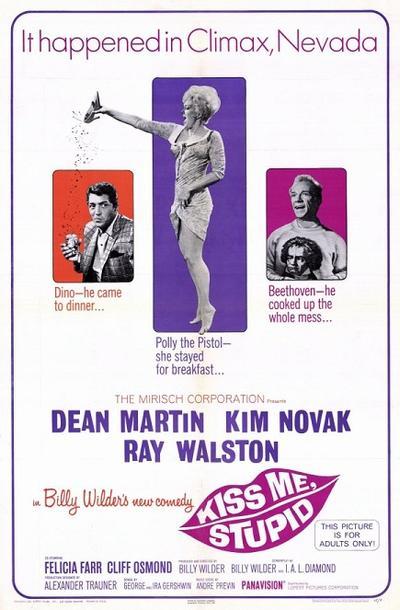 Quote:
A jealous piano teacher Orville Spooner sends his beautiful wife, Zelda, away for the night while he tries to sell a song to a famous nightclub singer Dino, who is stranded in town.

New York Times Review:
Spoiler
HOLLYWOOD — This was an unmistakable Billy Wilder-I. A. L. Diamond operation. There was the sharp contrast of surface-banter and concentration on detail; of unpredictable laughter, brushed off by disciplined professionalism. Mr. Wilder, as director, paced near the camera or prowled among actors, a multicolored cap tilted over his pixie face. Mr. Diamond lurked solemnly in the background. At the end of each sequence at the Samuel Goldwyn Studio, the partners usually retreated into corners to compare notes.

The occasion was the latest Wilder-Diamond movie, “Kiss Me, Stupid,” starring Peter Sellers, Dean Martin and Kim Novak, and featuring Felicia Farr and Cliff Osmond. The picture, as usual, was being made for the Mirisch Corporation, with distribution by United Artists. This was the film for which three unpublished George Gershwin tunes have been supplied with lyrics by Ira Gershwin. This was also the first Hollywood work by Mr. Sellers.

Repeatedly, as the scenes were filmed, off-color quips were exchanged between Mr. Wilder and Mr. Martin. Sometimes the comments were “insides.” Thus, Mr. Martin referred to Mr. Osmond as “Ollie,” because of a suggestion of the Oliver Hardy comedy technique by Mr. Osmond in one bit.

However, it was Mr. Sellers who stole the show without saying a word. He broke up Mr. Martin repeatedly with a few sly, deadpan glances. Mr. Martin, like a schoolboy with the giggles, was unable to recover for a few minutes, while the cinematographer, Joseph LaShelle, waited for a word from an astonished Mr. Wilder. “I can’t help it,” Mr. Martin apologized, trying not to look at Mr. Sellers while he smothered laughter. The English actor allowed himself the trace of a smirk, but his eyes glittered. Soon laughter was general.

“He makes jokes,” said a visiting executive of Mr. Sellers. “But don’t let it fool you. He is the damndest worrier. He is like all perfectionists. One time in England, he woke up a director in the middle of the night because he was worried about his performance the day before.”

The situation being filmed this day was crucial since, with typical Wilder-Diamond verbal economy, it established key characters and presented the basic problem from which all subsequent complications and humor would flow. Here are a couple of impecunious gasoline-station attendants (Mr. Sellers and Mr. Osmond) dreaming in a small Nevada town of fame as songwriters. Along comes an internationally famous entertainer (Mr. Martin) fresh from another Las Vegas conquest, stopping his expensive dual Ghia convertible at the station for gasoline en route to Hollywood. The problem: To persuade the entertainer to record one of their songs. Basically, Mr. Wilder conceded, this was a variation on how the country bumpkins bilk the city slicker.

As “Dino,” king of pop singers, prepared to drive away from the gasoline station, Orville J. Spooner (Sellers) begins his pitch. He is wearing a sweatshirt with the front covered by a massive head of Beethoven. He receives no encouragement and presses with: “We also have an Italian-type song, like ‘Volare,’ only better–be just perfect for you.”

“Dino’s” response: “Shove it–in an envelope and send it to my office in Hollywood.”

“Oh, no,” says Orville. “All you guys want is to steal those stamps.” The celebrity’s car spurts dust in Orville’s face as it vanished across Alex Trauner’s set. “Oh, to hell with him,” says Orville. “He sings flat anyway.” The car has, of course, been slightly damaged by Orville’s hulking partner, Barney J. Millsap. A few seconds later, Orville, with that combination of innocence and Satanism that is the Sellers’ world wide trademark, is answering an anguished telephone call from “Dino,” with:

“Oh hello there. Of course I remember you.” Then, with exquisite timing: “What seems to be the trouble.”

Soon the car is back at the gas station and the real mischief of the picture gets under way. “Dino” must be induced to remain over night. A wife (Miss Farr) must vanish and a substitute wife (Miss Novak) appear from a sleazy nightclub called “The Belly Button,” where the female costume features rhinestone set in the bared navel.

At one point, as props were being arranged for another sequence, Mr. Sellers commented briefly on the rash of his movies now being shown.

“They’ll be showing my old faded family snapshots next,” he said, “this is what happens as soon you become something to be stared at in the London Zoo.”