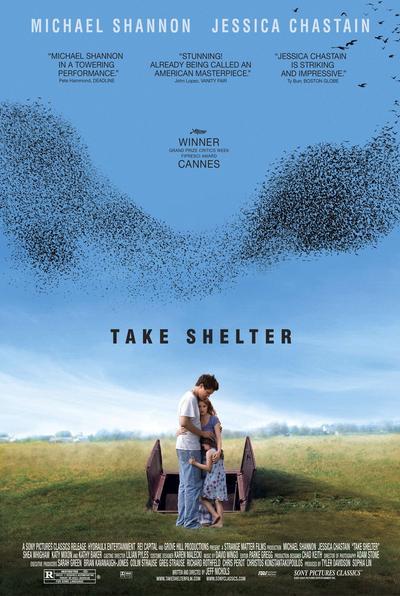 Plagued by a series of apocalyptic visions, a young husband and father questions whether to shelter his family from a coming storm, or from himself.

I’m going to try to be restrained in my praise of this film, but it’s going to be hard, because I think it’s about as close to perfect film-making as I’ve ever seen. I generally only write reviews for movies I’ve really loved, or really hated, and this movie I really loved.

This is a masterpiece.

I don’t know where to begin, really. Leaving the cinema, I felt as though I’d had some kind of accident – a little as if I was in shock. I had a very strong physical reaction to this movie, in tandem with my emotional response, and in many scenes I felt my heart racing. This is powerful material and has been delivered with great skill. The pacing is perfect, moving slowly and quietly toward not one but several emotional climaxes, each greater than the last, allowing the audience to enter Curtis’ world and share his emotions. The cinematography was beautiful, elegant, and achingly frightening at times; the dialogue was so real it hurt, and the soundtrack sinister and intense. Michael Shannon should win something for this role – he is Curtis completely and it’s a complex and deeply sympathetic portrayal of the confusion of a good man, a complicated portrait of a man trying to BE a good man, in the face of his own fear. From the very beginning, the atmosphere is unsettled, and some of the dream sequences are heart-stoppingly frightening. The story is multi-layered, working with ideas of family, mental illness, responsibility, fear, the current feeling of the-end-is-nigh that everyone senses – when Curtis said, ‘Is anyone seeing this?’ I almost cried for him.

I have thought very hard about this film since I saw it two days ago and I simply cannot fault anything about it, not one thing. I know I’m going to see it many times. It left me shaken and moved and I cannot wait to see more from this writer/director. Hands down the movie of the century, so far.