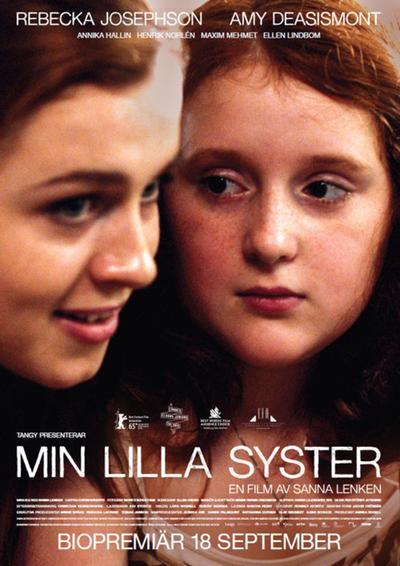 Just as Stella enters the exciting world of adolescence she discovers that her big sister and role model Katja is hiding an eating disorder. A story about jealousy, love and betrayal.

Quote:
Exploring the volatile intersections between sisterhood, eating disorders and gender-driven body issues, Swedish writer-director Sanna Lenken’s debut feature breathes warmth and humor into a potentially dry topic thanks largely to its terrific young cast. Partly inspired by her own teenage battle with anorexia, Lenken previously tackled a similar theme in her short Eating Lunch, which screened in Tribeca two years ago.

After winning the audience award and some major hometown love at the Gothenburg Film Festival in Sweden last week, My Skinny Sister takes its first overseas bow next week as part of Berlin’s teen-themed Generation Kplus strand. A universal subject, ace young actors and glossy production values should ensure further festival slots and distribution interest for an engagingly offbeat portrait of family dysfunction that feels at times like a Nordic cousin of Little Miss Sunshine.

The setting is contemporary Sweden, but it could be almost anywhere. Adolescent schoolgirl and competitive figure skater Katja (Amy Deasismont) is pretty, slender and confident. But her 12-year-old little sister, Stella (Rebecka Josephson), is still something of an ugly duckling, tragically aspiring to ape the achievements as her glamorous sibling, even nursing an innocent crush on Katja’s handsome German skating teacher Jacob (Maxim Mehmet). The volatile love-hate chemistry between the girls is elegantly delineated by Lenken, and will ring painfully true for anyone with brothers or sisters.

Born from a dawning curiosity about sex, romance and boys, Stella has self-conscious anxieties about her prepubescent body, which her older sister exploits for cruel comedy. Which is ironic, because Katja is the one with the real problem, secretly suffering from anorexia and bulimia as she strives to achieve glittery athletic perfection. Even when Stella figures out Katja has an eating disorder, her elder sibling pressures and blackmails her into keeping their parents (Annika Hallin and Henrik Norlen) in the dark, with catastrophic consequences.

Former child pop star Deasismont makes an assured transition into acting with her nuanced performance as a moody teen queen navigating the stormy seas of adolescence. But the film’s knockout emotional center is unquestionably 11-year-old Josephson, granddaughter of former Ingmar Bergman regular Erland Josephson (Cries and Whispers, Fanny and Alexander), who Lenken discovered just one month before shooting began. The young novice gives one of those immensely charming, freakishly magnetic performances that should secure her future acting work if she wants it.

The film is mostly shot at Stella’s eye level as she cowers perpetually in the shadow of scary adults and beanstalk teenagers. The restless, jittery handheld camera work by Moritz Schultheiss absolutely adores Josephson’s thick copper-colored tresses and comically stern features. Blessed with a freckled moon face that registers every tiny tremor of anguish and mischief, she is both convincingly awkward and winningly natural, even when she breaks into fluent English to converse with non-Swedish characters. A child star is born in Lenken’s warmhearted dramatic treatment of an evergreen subject.