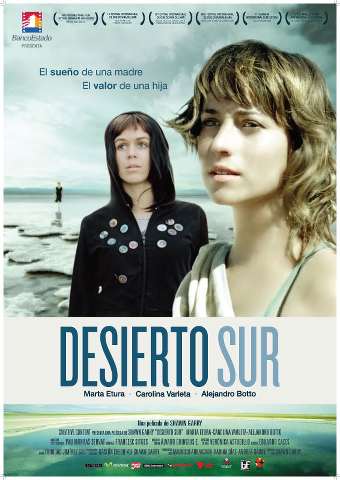 Quote:
Sofia is a young Spanish girl who loses her mother to an illness. An enigmatic letter falls into her hands, one that her mother sent to Chile when she was alive. The letter is returned by the post office when the recipient could not be found. The content of the letter raises stirring questions in Sofia, who then embarks on an adventure filled journey south of the world. The destination: An unknown and remote town called “Desierto Sur”.

About the director: Shawn Garry was born on December 15, 1978 in Santiago, Chile. He obtained a BA in Moving Image Arts from the College of Santa Fe (New Mexico) in 2001.

During the year 2002, in Barcelona-Spain, he directed the short film “Gatos Placentarios” which played in various festivals including 19th International Film Festival of Mar del Plata (Argentina) and 30th Iberoamerican Film Festival of Huelva (Spain).

“Desierto Sur” is his first film and was released theatrically in September 2008.