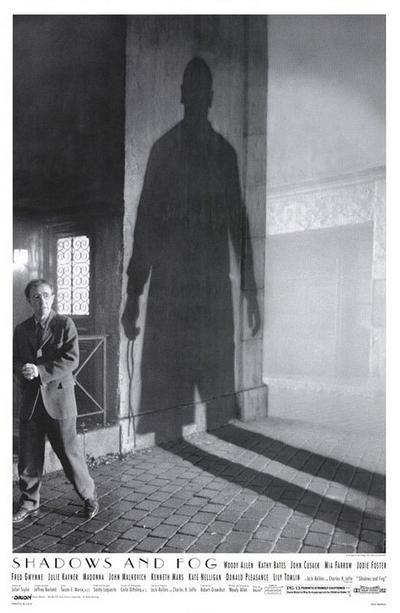 Quote:
As Wolcott Gibbs once said to Shakespeare: Kafka, here’s your hat.

That’s just one of the deliciously eccentric messages being sent out by Woody Allen in his rich, not easily categorized new black-and-white comedy, “Shadows and Fog.” Among other things, “Shadows and Fog” contemplates life, death, love, literature, movies, American humor in general, the gags of Bob Hope in particular, the music of Kurt Weill and the changing fashions in B.V.D.’s.

Kleinman (Mr. Allen) is a timid clerk in the kind of unidentified Middle European city once so beloved by Kafka, Kafka’s imitators, the masters of the German Expressionist cinema of the 1920’s and their imitators. It is always night in this closed world of miasmic fog, cobbled alleys and street lamps that shed too little light but cast photogenically deep shadows.

Authority here is absolute and inscrutable. It may be represented by the police, by angry mobs or by Kleinman’s petit bourgeois employer, whom Kleinman addresses with deference. He calls him “your grace.”

On this terrible night, death stalks the streets of the unidentified Middle European city, picking victims at random, strangling one fellow with piano wire, cutting another’s throat ear to ear. His most heinous crime: the murder of pretty, virginal identical twins.

Kleinman remains unaware, sleeping fretfully on the second floor of a grubby little rooming house where, you can be sure, the air is heavy with the smell of yesterday’s overcooked cabbage. At 2:30 A.M., there is a sudden pounding on Kleinman’s door. Men wearing long overcoats and fedoras push their way in.

They say they need Kleinman’s help in their search for the homicidal maniac. The exhausted fall-guy shivers in his underwear. What homicidal maniac? Don’t ask so many questions, they say. They tell him he is part of their plan. What plan? There’s no time to explain now, says the leader. Just get dressed and go outside. Someone will find him.

For Kleinman, it’s six of one, a half-dozen of the other. If the homicidal maniac doesn’t get him, the vigilantes will.

Kleinman reluctantly puts on his clothes and is leaving when confronted by his ferocious landlady. Even in the middle of the night, she is ready to pounce on Kleinman with a new proposal of marriage.

He points out that he is engaged to Eve. “She just wants you for an ornament,” says the landlady. She pauses, surveys the accumulation of grim bibelots around them, and adds, “Why would you want to marry Eve when you can have half of all this?”

Thus begins the Passion of Kleinman, a hellish and funny succession of trials in a hostile nighttime Middle European landscape. Like “Zelig,” “Shadows and Fog” is a pastiche of references to the works of others, but it’s a brazen, irrepressible original in the way it uses those references. How many times did you laugh while watching Steven Soderbergh’s polite and doomy “Kafka”?

Mr. Allen sends up his sources to rediscover and celebrate them. Carlo Di Palma’s black-and-white cinematography recalls the glories of a technology all but forgotten today, as do Santo Loquasto’s elegantly stylized studio sets, which may remind you of those in John Ford’s “Informer.”

Mr. Allen’s screenplay is an expansion of his play “Death,” included in his collection “Without Feathers,” originally published by Random House. Among the characters created for the film is that of the camera, which doesn’t merely record the events of this ghastly night of unreason. It is also a participant.

The camera has a distinct personality, rather like that of a curious, independently minded cat. It watches Kleinman with sarcastic amusement and then goes off exploring on its own. It knows where the action is. It’s privy to information that the bewildered Kleinman doesn’t dream of. It anticipates events.

While Kleinman wanders the streets, the camera turns up at the circus grounds where Irmy (Mia Farrow), the sword swallower, is trying to cheer up her lover, the Clown (John Malkovich), whose performance that night wasn’t well received.

Irmy doesn’t help him by whining about their getting married. But she really gets under his skin when she says, in that nagging way of hers, “I think you can always tell a lot about audiences by how they respond to a good sword swallower.” That’s enough to send him off to the wagon of Marie (Madonna), the high-wire artist, where he’s soon caught by Irmy. (The camera is already there.)

Kleinman keeps meeting people who assume he’s part of the plan, but who either can’t or won’t tell him what his part is. There’s an obsessed coroner (Donald Pleasence), impatient to perform an autopsy on the killer as part of his study of the nature of evil. Meanwhile, poor Irmy, who has run away from the circus, is befriended by a philosophical prostitute (Lily Tomlin) and taken back to the brothel for a good hot meal.

Irmy listens with fascination as the prostitutes (Ms. Tomlin, Jodie Foster, Kathy Bates, Anne Lange) talk about love, marriage and their clients. The camera, seemingly made drunk by their friendship and body warmth, swoops around the table where the prostitutes sit, peering into each face in turn as if seeing their humanity for the first time.

Irmy is propositioned by a customer, Student Jack (John Cusack), who offers her $700 to have sex with him. The experience forever changes Irmy’s life.

Before the arrival of dawn, the original vigilante group has broken up into warring factions. The killer finds additional victims. Kleinman comes to the brothel saying that he has never before paid for sex. “You just think you haven’t,” says Ms. Foster. Eventually a bogus seer with a sensitive nose sniffs Kleinman and identifies him as the killer. All that and much, much more.

Mr. Allen is extravagant in his use of talent. He’s now in a position to obtain the best actors available to do everything from starring and featured roles to what amount to walk-ons. Yet the strength of the film is such that recognizing, say, Kate Nelligan standing behind a window, seen briefly in long shot, does not interrupt the drama, but enriches it.

A note of caution: “Shadows and Fog” operates on its own wavelength. It is different. It should not be anticipated in the manner of other Allen films. It’s unpredictable, with its own tone and rhythm, even though, like all of the director’s work, it’s a mixture of the sincere, the sardonic and the classically sappy. A vigilante questions Kleinman: “Are you a coward or a worm or a yellow-belly?” “No,” says Kleinman, “but keep going.” 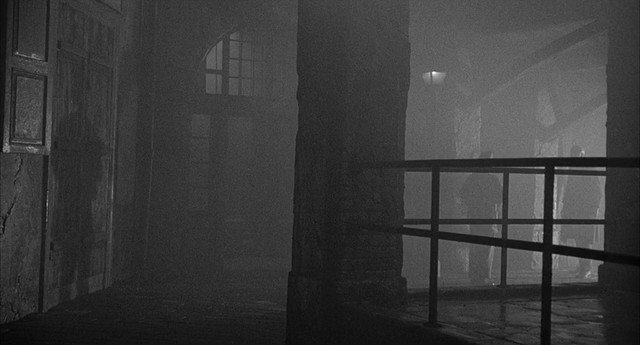 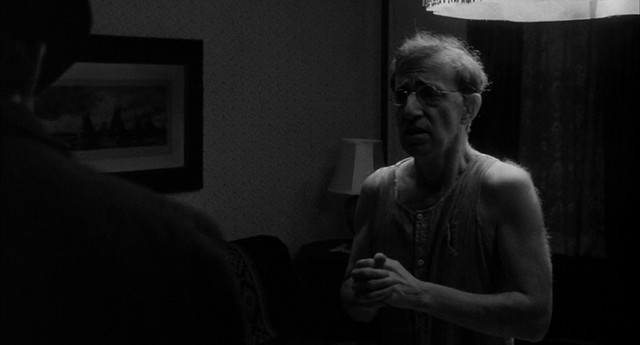 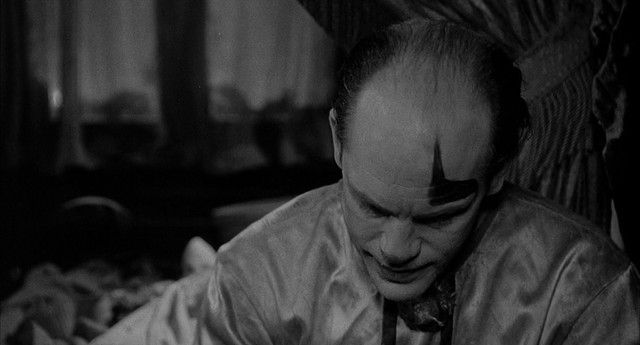 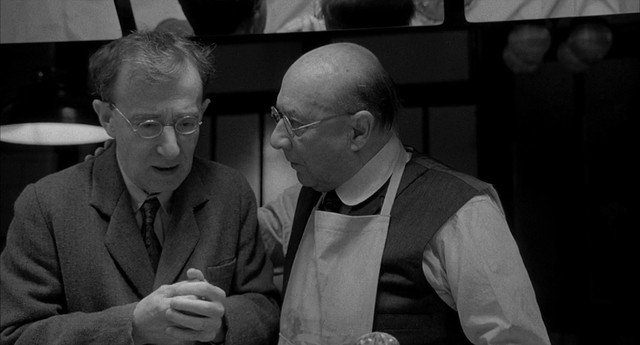 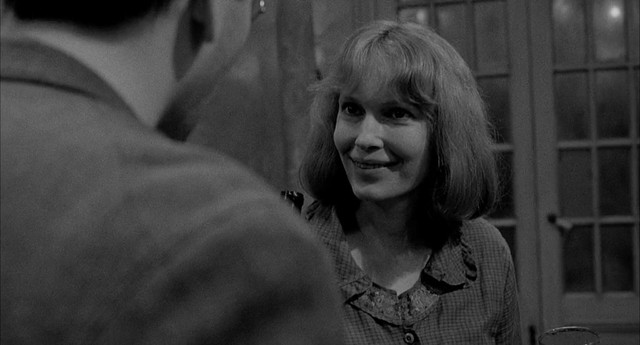 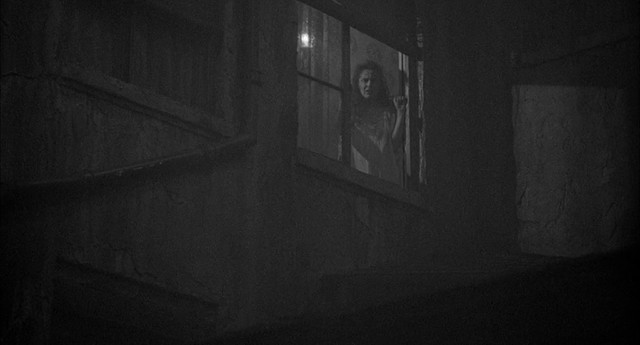 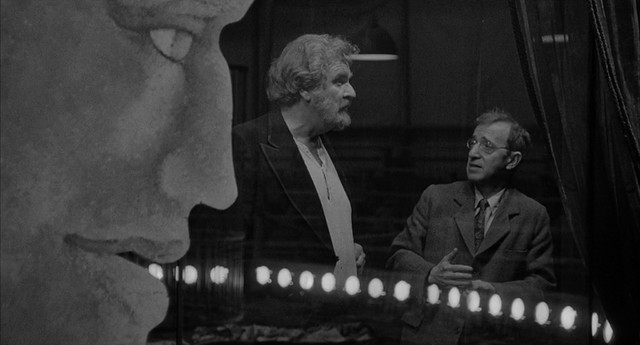