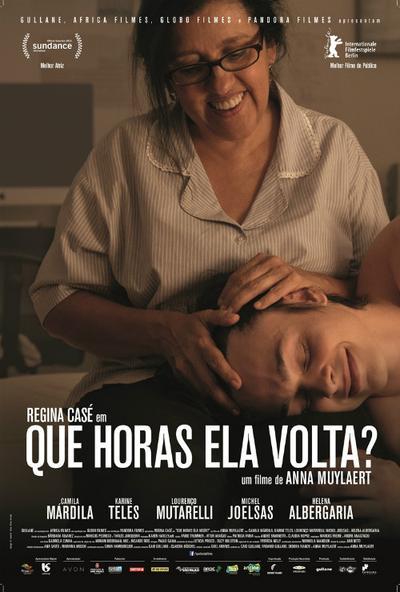 Quote:
Val spends 13 years working as nanny to Fabinho in São Paulo. She is financially stable but has to live with the guilt of having left her daughter Jéssica, in Pernambuco, in the northeast of Brazil, raised by relatives. As college entrance exams roll around, Jéssica wants to come to São Paulo to take her college entrance exams too. When Jéssica arrives, cohabitation is not easy. Everyone will be affected by the personality and candor of the girl and Val finds herself right in the middle of it.

Biography
Anna Muylaert was born in São Paulo in 1964. After graduating from the University of São Paulo in 1984, she began her career as an assistant director on the feature films Running Out of Luck (Julien Temple) and Moon Over Parador (Paul Mazursky).
In 1989 she began working in television. She worked as the “Bee-Reporter” on the TV show TV MIX, and as editor and reporter on Matéria Prima. In 1991 she entered the tele-dramaturgy world, participating in the creation of Mundo da Lua & Castelo Rá-Tim-Bum, both big hits for TV Cultura. She also wrote the script for the film O Menino, A Favela e as Tampas de Panela, which was part of the project Open a Door for the BBC, winning many international awards. In 1997 she created and wrote the TV program Disney Club, winner of APCA Award for Best Children’s Program.
In the video arena she has directed and produced many works, among them Zona Eleitoral. In 1996 she directed the music video Mama Africa for forro singer Chico César, winner of several awards including an MTV Music Award.
In 2001 she released her first feature-length film, Durval Records, winner of 7 awards at the Gramado Film Festival and selected for many festivals, including Montreal, Rotterdam, and Torino, where she won the Holden Prize for Best Screenplay. She has written many scripts for acclaimed directors, among them, Cao Hamburger’s The Year My Parents Went on Vacation, Brazil’s official selection for the 2007 Academy Awards, the TV series Alice for Karim Ainouz, and co-wrote Paulista with Roberto Moreira.
In 2009 Anna released her second film, Smoke Gets in Your Eyes, winner of 8 awards at the Brasilia Film Festival.