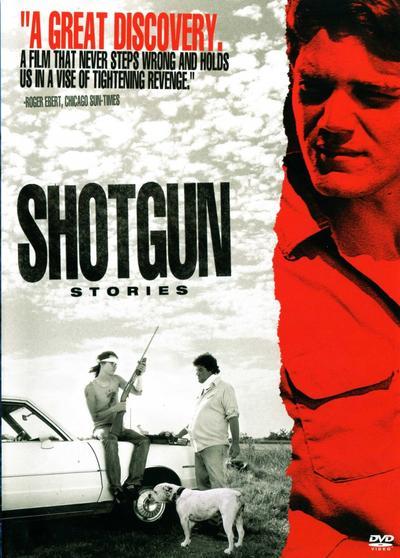 Shotgun Stories tracks a feud that erupts between two sets of half brothers following the death of their father. Set against the cotton fields and back roads of Southeast Arkansas, these brothers discover the lengths to which each will go to protect their family.

A point-blank buckshot blast of inarticulate American rage, played with the disarmingly placid inevitability of Greek tragedy, “Shotgun Stories” is a precisely modulated yet cumulatively forceful story of a rural family feud turned deadly. Tonal similarity to work of David Gordon Green, one of three producers on the project, will attract immediate interest; sure helming hand and genre trappings of script by first-timer Jeff Nichols will ensure loaded specialty biz and ancillary stockpiling.

The sleepy southeast Arkansas town where drama unfolds is the kind of place where people don’t look around when you drive up to meet them; they can tell who you are by the sound of your vehicle and the slam of its door. This is just one of many tide-like contempo rural rhythms of life subtly captured by Little Rock native Nichols.

Though never seen, newly deceased Cleaman Hayes has fathered seven children by two women, with a break for rehab and business success between families. The first three are so blood simple he never gave them proper names: Son (Michael Shannon) is a fish hatchery worker convinced he’s about to crack the code at the nearby casino; Kid (Barlow Jacobs) is pondering marriage even though he has no truck and lives in a pup tent; and Boy (Douglas Ligon) spends most of his free time — make that most of his time, period — fiddling with his ancient van, but is so lazy and/or slow he tries to rig up a normal-sized air conditioner to the cigarette lighter.

The second batch, clearly the favorites of the late Hayes pere, are led by family man Cleaman (Michael Abbott, Jr.) and include hot-headed Mark (Travis Smith) and older teenagers Stephen (Lynsee Provence) and John (David Rhodes). Unlike the first Hayes brood, they’re trying to make a go of a local farm.

When Son spits on his father’s casket, Mark later instigates a fistfight among the half brothers. Kid retaliates, with tragic results. At each juncture, local layabout Shampoo Douglas (G. Alan Wilkins) goads Son on.

And so it goes, until the bodies of the Hayes pets, and soon enough, their men, begin to pile up. “You raised us to hate these boys and now we do,” Son tells his mother, Nicole (Natalie Canerday), with dispassionate finality. “So it’s come to this.”

Read as a cautionary tale on the futility of revenge, “Shotgun Stories” is a low-key thriller with the requisite genre tension. Seen another way, in a country where the explanation “to protect my family” might also translate as “cross me and you’re dead,” pic is something much more subversive. These are rural folk, but Nichols’ script grants them a primitive elegance that underscores the timelessness of the conflict, as well as the mindset that created it. “You don’t know the square root of shit,” math whiz wannabe Son teases his siblings in a rare light moment, but he could well be speaking of the destiny they can’t escape.

Thesping is pitch-perfect across the board, with Shannon’s early gruffness giving way to Ligon’s instinctual nobility. Oppressiveness is leavened slightly by Wilkins’ low-keyed comic turn. Tech package is pro, led by Adam Stone’s widescreen lensing and pungent score by Ben Nichols and his band, Lucero. Astute prod and costume designs sell the milieu without resorting to caricature.

Director’s Statement
There is no victory in revenge. This is an idea I chose to explore with Shotgun Stories, a film tracking a feud that erupts between two sets of half brothers following the death of their father. So often in literature, film, politics and society, revenge, and more importantly the execution of revenge, is considered success. Whether it’s Edmund Dantes fulfilling his pledge to ruin Danglars in The Count of Monte Cristo or Hans Gruber falling to his death in Die Hard, the euphoric feeling we get as an audience watching the villain meet his or her comeuppance is undeniable. With Shotgun Stories, I wanted to work against this notion. I wanted revenge to be an awkward thing to exact and a cause not necessarily championed by the audience. Violence is an unusual task for these characters, just as it is for most people. Their anger and emotions are validated, but their reactions to those emotions are not precise. My hope is that Shotgun Stories gives an honest portrayal of normal, hard working people responding to the pain and heartbreak they find, and at times create, in their own lives.

We chose to shoot this film in 35mm in the anamorphic 2:35 aspect ratio. When I was fifteen I was fortunate enough to see a re-released print of Lawrence of Arabia in the theater. I’ll never forget how the landscape helped define that story and the affect that had on me. I’ve wanted to tell stories in scope ever since. Southeast Arkansas, where our film was shot and where I grew up, is a place filled with breathtaking landscapes of cotton fields and farmland. I wanted audiences to see this place the same way I see it, in scope. Also, this landscape defines our characters. We find these people living in a slow burn South where most everyone sweats for their living. The towns and the people have, for the most part, been left to their own devices. This makes for characters that keep their thoughts and emotions close to their chests. They aren’t always comfortable expressing themselves. Their words don’t always tell the entire story.
Jeff Nichols