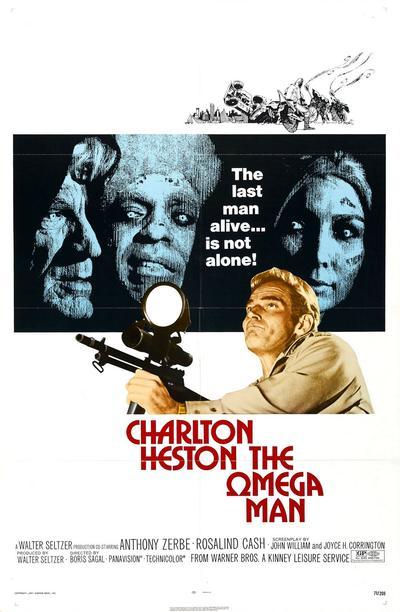 Quote:
Sure, this sci-fi action drama has its cheesy moments but it remains one of the most beloved genre flicks of the 1970s. Your humble editor (at the tender age of 9) saw this on the big screen when it was first released. It’s been a personal fave — a cherished guilty pleasure, if you will — ever since.

This is the second film based on Richard Matheson’s novel I Am Legend, the first being the 1964 Italian production The Last Man on Earth starring Vincent Price. That film, actually adhering more closely to the novel, had Price’s sole survivor besieged by blood-drinking vampires spawned by a deadly plague; they’re repelled by garlic and Price drives stakes through their hearts to kill them. The Charlton Heston vehicle eschews such horror elements in favor of action, more befitting the actor’s swaggering, tough guy screen image. There aren’t any vampires in The Omega Man. Instead our hero is pitted against a fanatical cult of bio-mutants — light-sensitive albinos — with a religious zeal to destroy the last “normal” human left alive.

Imagine, if you will (Rod Serling voice here), that the world ended in 1975. Virtually the entire population of Earth has died after armed conflict between the U.S.S.R. and China escalates into a germ warfare apocalypse. Baccilli-carrying missiles spread a deadly plague across the globe, wiping out humanity. Only a handful of people survive, and these are gradually changed into white-skinned, zombie-like mutants with psychotic tendencies. There is one exception: Colonel Robert Neville (Heston), a military scientist who was working to find a cure when the End came. Surviving a helicopter crash (miraculously so, considering the size of the fireball), Neville injected himself with the only existing sample of the vaccine. As far as he knows he is the only normal human being left in Los Angeles, perhaps the world. For that very reason he is targeted for death by a black-robed cult of mutants called “The Family”, led by their charismatic leader, Matthias (Anthony Zerbe). A former newscaster, Matthias insanely believes he and his fellow mutants were chosen by Providence to complete the “cleansing” of the world — destroying the machines, art and science that ultimately brought Man’s downfall.

Two years later Neville remains in the city, hunting the mutants by day and hunkering down in his fortified townhouse by night. He wouldn’t stand a chance against the Family if not for the cult’s quasi-religious ban on using modern weapons and machines. Neville doesn’t operate under such restrictions; he’s always armed and ready for action. (Weapon of choice: submachinegun.) Thus the war rages. Neville stubbornly refuses to leave — he’s made it the mission of his lonely existence to extermine the Family to its last member. But the strain is telling. Neville is beginning to crack up mentally… He definitely thinks he’s losing it when, during one of his daytime search-and-destroy sweeps, he spots a black woman — a fellow human being not affected by the plague. Despite Neville’s entreaties she runs away from him in fear.

Not long after this episode Neville gets careless and is captured by the Family. Matthias condemns him to be burned at the stake, this final act of cleansing to take place on Dodger Stadium’s football field. Seemingly done for, Neville is rescued in the nick of time by Dutch (Paul Koslo), a hippy biker, and trash-talkin’ Lisa (Rosalind Cash), the African-American woman who’d run from him earlier. Neville discovers that the two are caring for a small group of children as yet still unaffected by the plague. For two years they’ve been hiding from him as well as the Family — as fearful of Neville’s “shoot at anything that moves” policy as they were of Matthias’ madness. But Lisa’s teenage brother Richie (Eric Laneuville) is beginning to “turn”, his transformation into an albino mutant already well underway. Dutch, a medical student “before the world was scratched”, knows of Neville’s reputation as a bioweapons researcher; only the ex-scientist might possess the knowledge to help Richie before it’s too late. Astonished when Neville tells them he’s immune, work immediately begins on deriving a serum from his blood. Soon Richie starts to recover. Plans are made to develop enough serum to cure all the kids, then pack up and move away from the dead city and begin anew. Matthias and the Family, however, may force a different outcome.

The Omega Man is a very dated work of science fiction. Poor Neville… Since the world ended in the 1970s, he’s stuck with 8-track tapes instead of CDs, with no access to VCRs or DVD players. (Additionally, specific dates are mentioned in the script and calendars are shown. Those that grew up during the original “bellbottom” decade will likely be more forgiving of this.) Yet Charlton Heston ably carries the film with his strong performance. That he’d be willing to have his character engage in an interracial romance — Neville and Lisa eventually get it on — is commendable when one considers the time frame in which the flick was made. (Even 30 years later, black-white romances remain extremely rare in mainstream American film and television.) Veteran character actor Zerbe is also first-rate, sinking his teeth into the role of the demented Matthias. As good as the two leads are, one really wishes the film had spent more time juxtaposing the unique madness of its protagonists. After all, Neville’s stubborn refusal to leave the city is as illogical as Matthias’ Luddite dream of primitivism.

Still, the pace is brisk and the dystopian “future” of post-plague L.A. is well-realized. In a sense, The Omega Man could be called the world’s only Gothic Sci-Fi Action Proto-Blaxploitation film… These elements are blended together to form a unique kind of B picture, the only movie you’ll ever see Chuck “I’m the NRA” Heston hefting an assault rifle while dressed like Austin Powers. The script, alas, is uneven and shortchanges the period before Neville encounters the other surviving normal humans, when he thinks he’s truly the last man alive. (Like Vincent Price, Heston is a good enough actor to carry a film when he’s the only person on the screen for long stretches.) But there are literally reams of instantly quotable dialog. The various action scenes are nothing special but they’re made memorable by the excellent (and catchy) pop-flavored score by Ron Grainer, composer of the themes to TV’s Dr. Who and The Prisoner. The music positively reeks of the early Seventies but the aroma is very groovy. (Check out the MP3 on the left-hand sidebar for a prime example.) It’s a bit easier to forgive the obvious stuntman — that’s clearly not Heston on the motorcycle — when Grainer’s music provides scenes with so much funky dramatic juice.
Brian Lindsey @ Eccentric Cinema